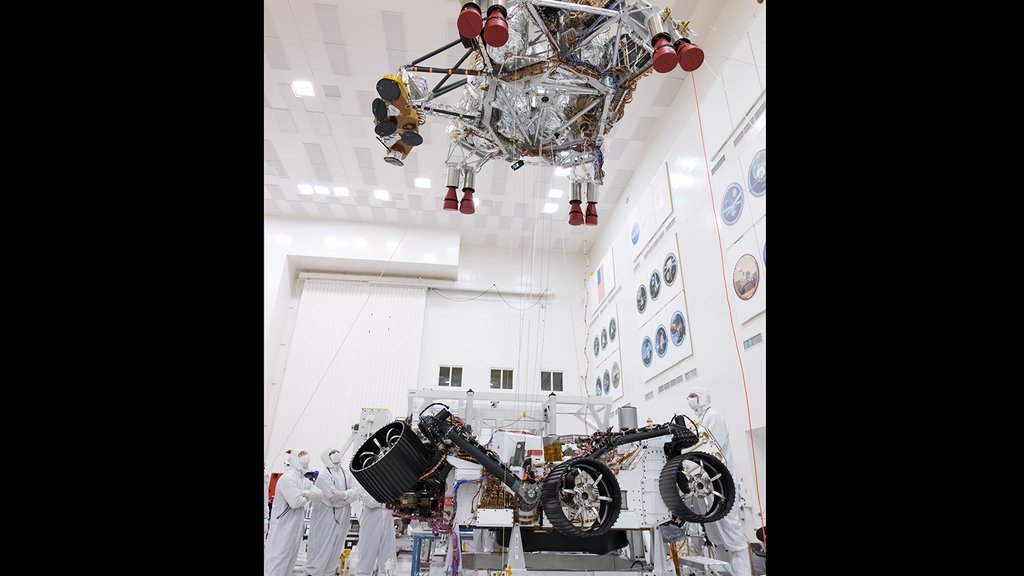 In this picture from Sept. 28, 2019, engineers and technicians working on the Mars 2020 spacecraft at NASA's Jet Propulsion Laboratory in Pasadena, California, look on as a crane lifts the rocket-powered descent stage away from the rover after a test.› Full image and caption
Credit: NASA/JPL-Caltech

A crane lifts the rocket-powered descent stage away from NASA's Mars 2020 rover after technicians tested the pyrotechnic charges that separate the two spacecraft.

In this picture from Sept. 28, 2019, engineers and technicians working on the assembly and testing of the Mars 2020 spacecraft look on as a crane lifts the rocket-powered descent stage away from the rover. They've just completed a successful separation test at NASA's Jet Propulsion Laboratory in Pasadena, California.

"Firing the pyrotechnic devices that held the rover and descent stage together and then doing the post-test inspection of the two vehicles was an all-day affair," said Ryan van Schilifgaarde, a support engineer for Mars 2020 assembly at JPL. "With this test behind us, the rover and descent stage go their separate ways for a while. Next time they are attached will be at the Cape next spring during final assembly."

Time-lapse animated gif of engineers and technicians working on the Mars 2020 spacecraft, look on as a crane lifts the rocket-powered descent stage away from the rover. Image Credit: NASA/JPL-Caltech > Download larger gif

Both the rover and descent stage will ship to Cape Canaveral, Florida, this winter. Before then there'll be a battery of tests for the Mars 2020 rover, including an evaluation of its computers and mechanical systems in Mars-like conditions. Called the Surface Thermal Test, it involves subjecting the car-size Mars vehicle to atmospheric pressures and temperatures similar to those it will encounter on the Red Planet.

Interested K-12 students in U.S. public, private and home schools can enter theMars 2020 Name the Rover essay contest. One grand prize winner will name the rover and be invited to see the spacecraft launch in July 2020 from Cape Canaveral.