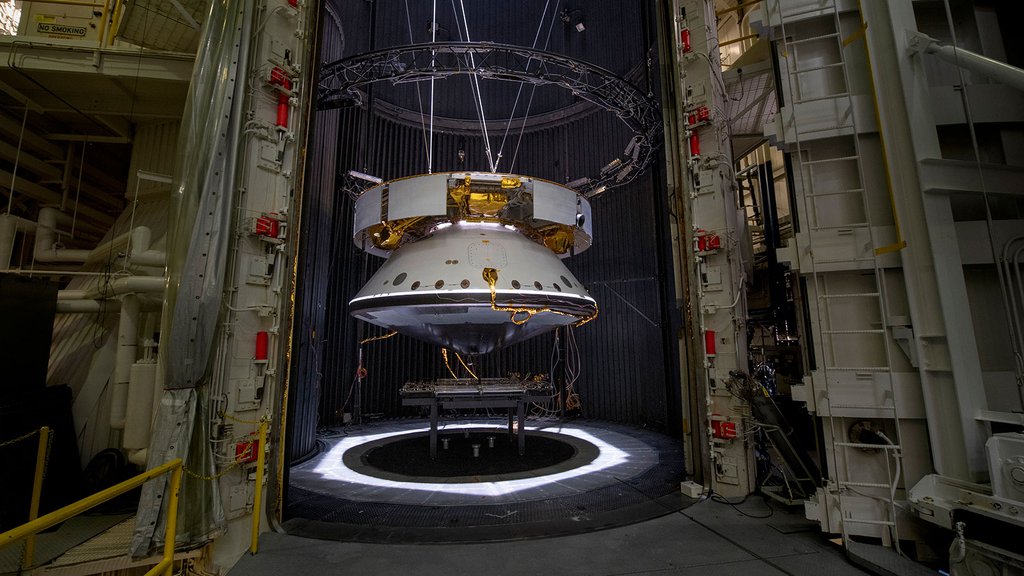 The completed spacecraft that will carry the Mars 2020 rover to the Red Planet, next year hangs suspended by cables inside the Space Simulator Facility at NASA's Jet Propulsion Laboratory in Pasadena, California. The image was taken on May 9, 2019.› Full image and caption
Credit: NASA/JPL-Caltech 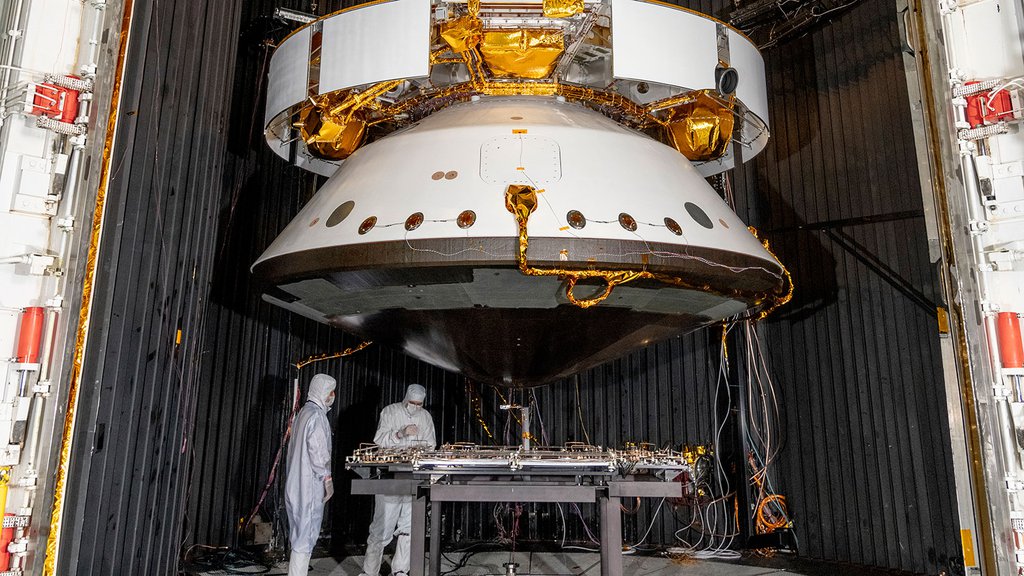 Engineers prepare the Mars 2020 spacecraft for a thermal vacuum (TVAC) test in the Space Simulator Facility at NASA's Jet Propulsion Laboratory in Pasadena, California. The image was taken on May 9, 2019.› Full image and caption
Credit: NASA/JPL-Caltech 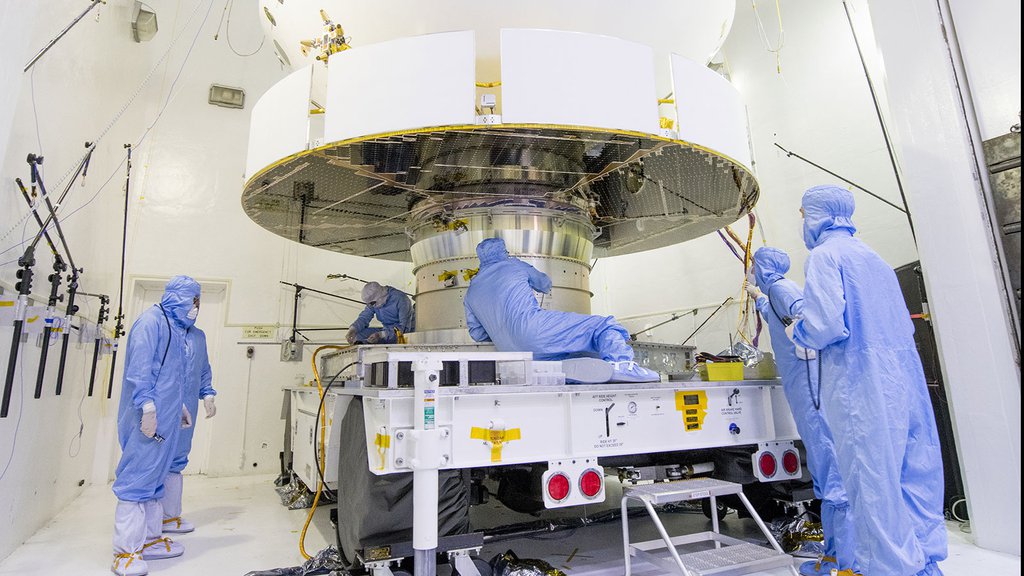 NASA's Mars 2020 spacecraft undergoes examination prior to an acoustic test in the Environmental Test Facility at NASA's Jet Propulsion Laboratory in Pasadena, California. The image was taken on April 11, 2019, at JPL.› Full image and caption
Credit: NASA/JPL-Caltech

NASA's Mars 2020 spacecraft has completed tests that are the best Earthly approximations what the spacecraft will endure during launch and interplanetary cruise.

NASA's Mars 2020 spacecraft has completed acoustic and thermal vacuum (TVAC) testing at the Jet Propulsion Laboratory in Pasadena, California. The acoustic test of the spacecraft that will carry the Mars 2020 rover to a soft touchdown in Jezero Crater on Feb. 18, 2021, is the best Earthly approximation for what the spacecraft will endure during launch, where it will encounter potentially destructive levels of sound and vibration. TVAC introduces the vacuum and extreme temperatures of space that could cause components to malfunction or fail.

"First we blast it with sound to make sure nothing vibrates loose," said David Gruel, the Mars 2020 assembly, test and launch operations manager at JPL. "Then, after a thorough examination, we 'put it in space' by placing the spacecraft in this huge vacuum chamber we have here at JPL. We pump out the atmosphere, then chill parts of it and cook others while testing the performance of the entire spacecraft."

The first part of the process occurred on April 12, when the spacecraft "stack" was bombarded by sound from nitrogen-pressurized speakers in JPL's Acoustic Test Chamber. The stack includes the aeroshell as well as a rover stand-in (the real rover is undergoing final assembly in JPL's High Bay 1 cleanroom) and other components. Together, they are assembled, or stacked, in the same configuration as when it launches toward Mars in July 2020.

"We test the hardware components with a random noise spectrum in order to replicate a launch environment," said Andy Rose, manager of the Environmental Test Facilities at JPL. "We reach sound levels as high as 150 decibels, which would really rattle your fillings if you were inside the chamber at the time."

Of course, the technicians waited for each several-minute run to end before opening the chamber door to inspect the spacecraft in their cleanroom attire (the spacecraft must remain contamination-free to adhere to planetary protection rules). By day's end, the stack had been acoustically tested and inspected six times. Then the vehicle was double-bagged in clean antistatic nylon film and transported back to the Spacecraft Assembly Facility's High Bay 1 cleanroom.

"For the acoustic test, the stack had the heat shield pointed up, but for the thermal vacuum test, it had to be down," said Gruel. "The best place to turn it over is the cleanroom, where we have a fixture designed for that process." Once the stack passed muster, the team rebagged it and sent it out for thermal testing.

On April 26, the stack entered JPL's 25-foot-wide, 85-foot-tall (8-meter-by-26-meter) Space Simulator Facility. The historic chamber has hosted spacecraft from NASA's Mariner missions of the early 1960s to Voyager and Cassini to all of the Mars rovers. The 2020 stack was suspended from cables so the cold realities of interplanetary cruise could hit the spacecraft from every angle.

With the 16-ton door closed, a near-vacuum environment was established. Then, as the Mars 2020 test team looked on, the baffled chamber walls were flooded with liquid nitrogen to chill it to -200 degrees Fahrenheit (-129 degrees Celsius). To simulate the Sun's rays that Mars 2020 will encounter during its voyage, powerful xenon lamps several floors below the chamber illuminated, their light directed onto a mirror at the top of the chamber and reflected down on the spacecraft. Eight days later the lamps were turned off, atmosphere was reintroduced to the chamber, and the door opened. Acoustic and thermal vacuum testing was complete.

"This is the most comprehensive stress test you can put a spacecraft through here on Earth," said Gruel. "We flew in our simulated space environment for a week and a day, checking and rechecking the performance of every onboard system and subsystem. And everything looked great - which is a good thing, because next time this spacecraft stack hits a vacuum, it will be on its way to Mars for real."

On May 10, the stack returned yet again to the High Bay 1 cleanroom. Just feet away, technicians worked on the 2,314-pound (1,050-kilogram) Mars 2020 rover that will be part of the stack at launch. The rover already had more than 90% of the components that will make up the interior of the chassis, from the science instruments and computers to subsystems and electrical boxes to the organized tangle of electrical wiring connecting them all.

The 2020 rover carries an entirely new suite of instruments, including a sample-caching system that will collect samples of Mars for return to Earth on subsequent missions. The mission will launch from Cape Canaveral Air Force Station in Florida in July of 2020 and land at Jezero Crater on Feb. 18, 2021.

For more information about NASA's exploration of Mars, visit: