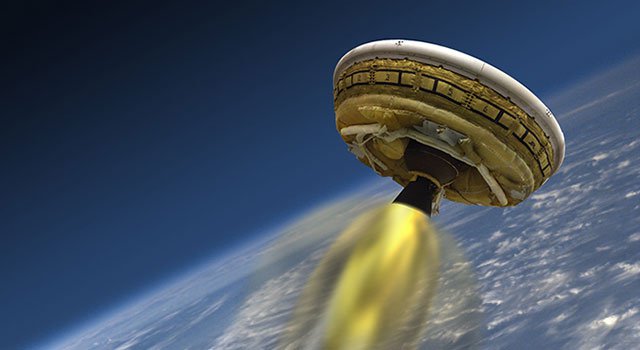 NASA has not been able to conduct the flight test of the Low-Density Supersonic Decelerator (LDSD) from Kauai, Hawaii, because of continuing unfavorable weather conditions.

NASA did not conduct the flight test of the agency's Low-Density Supersonic Decelerator (LDSD) from the U.S. Navy's Pacific Missile Range in Kauai, Hawaii, during its designated launch period. The project's reserved time at the range will expire Saturday, June 14, with NASA unable to fly the test because of continuing unfavorable weather conditions.

Mark Adler, the Low Density Supersonic Decelerator project manager and Ian Clark, principal investigator on the project, both from NASA's Jet Propulsion Laboratory in Pasadena, California, participated in a media teleconference this morning and addressed questions on the project.

"There were six total opportunities to test the vehicle, and the delay of all six opportunities was caused by weather," said Adler. "We needed the mid-level winds between 15,000 and 60,000 feet to take the balloon away from the island. While there were a few days that were very close, none of the days had the proper wind conditions."

NASA continues to look at options for a future launch window. The team is working with the Pacific Missile Range Facility and looking at weather conditions predicted for later in the month when another launch window could be possible.

"Our team has been working on this project for several years, and we have been so focused," said Clark. "We came here to do our job and get this vehicle off the ground, but unfortunately weather didn't allow us to do this. We are very optimistic and are hoping to test the vehicle at the end of the month."

Continue to follow us here and also on Twitter: @NASA_Technology, @NASA, @NASAJPL and @NASA_Marshall for the latest updates on the mission.

NASA's Low Density Supersonic Decelerator will not launch Saturday, June 14, due to unfavorable weather conditions forecast for this last designated launch date in the current launch period. NASA will research range availability for the coming weeks and the costs associated with extending the test flight period for launching LDSD's high-altitude balloon and test vehicle, with programmatic decisions required to proceed.

We will hold a teleconference for media with LDSD project representatives with the date and time still being decided, more than likely tomorrow morning. As soon as we have that information confirmed, we will send a media advisory with date, time and call-in information.

Due to weather conditions, there will be no launch of the LDSD test vehicle today, Wednesday, June 11. The next potential launch date is Saturday, June 14.
Check back on our website and @NASA_Technology to get the latest updates on the mission.

Mission managers are proceeding with preparations for a launch attempt Wednesday morning, June 11, of a high-altitude balloon carrying the LDSD test vehicle to the edge of space on a test flight of the "flying saucer." At present, weather forecasted for the morning is close, but not within launch parameters. Mission managers will evaluate the latest weather conditions again early in the morning, to confirm favorable conditions. The Wednesday launch window extends from 8:15 a.m. to 9 a.m. HST (11:15 a.m. to 12 noon PDT).
Check back on our website and @NASA_Technology to get the latest updates on the mission.

The winds aren't cooperating for our launch of the Low Density Supersonic Decelerator (LDSD) tomorrow, Monday, June 9. Other potential launch dates include June 11 and 14. Wind conditions have been the prevailing factor in the launch delays, as they have to be just the right speed and direction in order to launch the balloon that carries the LDSD test vehicle. The launch decision for Wednesday, June 11 will be made on Tuesday, June 10. Check back with us for updates.

Due to weather conditions, there will be no launch of the LDSD test vehicle tomorrow, Saturday, June 7. Other potential launch dates include June 9, 11, and 14. Launch decision for Monday, June 9 will be made on Sunday, June 8. Check back with us for updates.

Due to weather conditions, there will be no launch of the LDSD test vehicle Thursday, June 5. Other potential launch dates include June 7, 9, 11 and 14. The decision to move forward with another launch attempt of the LDSD test is made the day before each launch opportunity date.

Due to weather conditions, there will be no launch of the LDSD test vehicle Tuesday, June 3. Other potential launch dates include June 5, 7, 9, 11 and 14. Launch decision for Thursday, June 5 will be made on Wednesday, June 4. Check back with us for updates.

NASA's flying saucer-shaped test vehicle is ready to take to the skies from the U.S. Navy's Pacific Missile Range Facility in Kauai, Hawaii, for its first engineering shakeout flight.

The first launch opportunity for the test vehicle is June 3, when the launch window opens at 8:30 a.m. Hawaii Standard Time (11:30 a.m. PDT/2:30 p.m. EDT). The test will be carried live on NASA TV and streamed on the Web. The Low Density Supersonic Decelerator (LDSD) will gather data about landing heavy payloads on Mars and other planetary surfaces.

"The agency is moving forward and getting ready for Mars as part of NASA's Evolvable Mars campaign," said Michael Gazarik, associate administrator for Space Technology at NASA Headquarters in Washington. "We fly, we learn, we fly again. We have two more vehicles in the works for next year."

As NASA plans increasingly ambitious robotic missions to Mars, laying the groundwork for even more complex human science expeditions to come, accommodating extended stays for explorers on the Martian surface will require larger and heavier spacecraft.

The objective of the LDSD project is to see if the cutting-edge, rocket-powered test vehicle operates as it was designed -- in near-space at high Mach numbers.

"After years of imagination, engineering and hard work, we soon will get to see our Keiki o ka honua, our 'boy from Earth,' show us its stuff," said Mark Adler, project manager for the Low Density Supersonic Decelerator at NASA's Jet Propulsion Laboratory in Pasadena, California. "The success of this experimental test flight will be measured by the success of the test vehicle to launch and fly its flight profile as advertised. If our flying saucer hits its speed and altitude targets, it will be a great day."

The way NASA's saucer climbs to test altitude is almost as distinctive as the test vehicle itself.

"We use a helium balloon -- that, when fully inflated, would fit snugly into Pasadena's Rose Bowl -- to lift our vehicle to 120,000 feet," said Adler. "From there we drop it for about one-and-a-half seconds. After that, it's all about going higher and faster -- and then it's about putting on the brakes."

A fraction of a second after dropping from the balloon, and a few feet below it, four small rocket motors will fire to spin up and gyroscopically stabilize the saucer. A half second later, a Star 48B long-nozzle, solid-fueled rocket engine will kick in with 17,500 pounds of thrust, sending the test vehicle to the edge of the stratosphere.

"Our goal is to get to an altitude and velocity which simulates the kind of environment one of our vehicles would encounter when it would fly in the Martian atmosphere," said Ian Clark, principal investigator of the LDSD project at JPL. "We top out at about 180,000 feet and Mach 4. Then, as we slow down to Mach 3.8, we deploy the first of two new atmospheric braking systems."

The project management team decided also to fly the two supersonic decelerator technologies that will be thoroughly tested during two LDSD flight tests next year.

If this year's test vehicle flies as expected, the LDSD team may get a treasure-trove of data on how the approximately 20-foot (6-meter) supersonic inflatable aerodynamic decelerator (SIAD-R) and the supersonic parachute operate a full year ahead of schedule.

The SIAD-R, essentially an inflatable doughnut that increases the vehicle's size and, as a result, its drag, is deployed at about Mach 3.8. It will quickly slow the vehicle to Mach 2.5 where the parachute, the largest supersonic parachute ever flown, first hits the supersonic flow. About 45 minutes later, the saucer is expected to make a controlled landing onto the Pacific Ocean off Hawaii.

NASA TV will carry live images and commentary of LDSD engineering test. The test vehicle itself carries several onboard cameras. It is expected that video of selected portions of the test, including the rocket-powered ascent, will be downlinked during the commentary. Websites streaming live video of the test include: