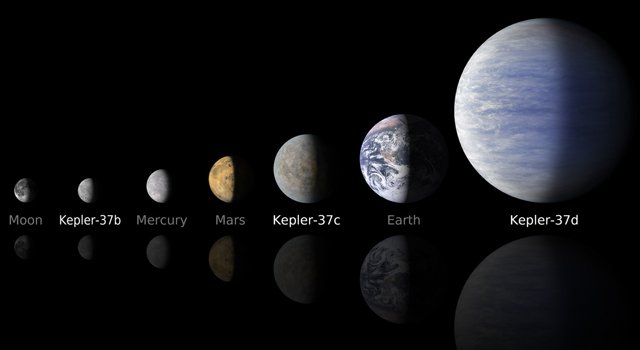 NASA's Kepler mission has discovered a new planetary system that is home to the smallest planet yet found around a star like our sun, approximately 210 light-years away in the constellation Lyra.› Full image and caption
Credit: NASA/Ames/JPL-Caltech 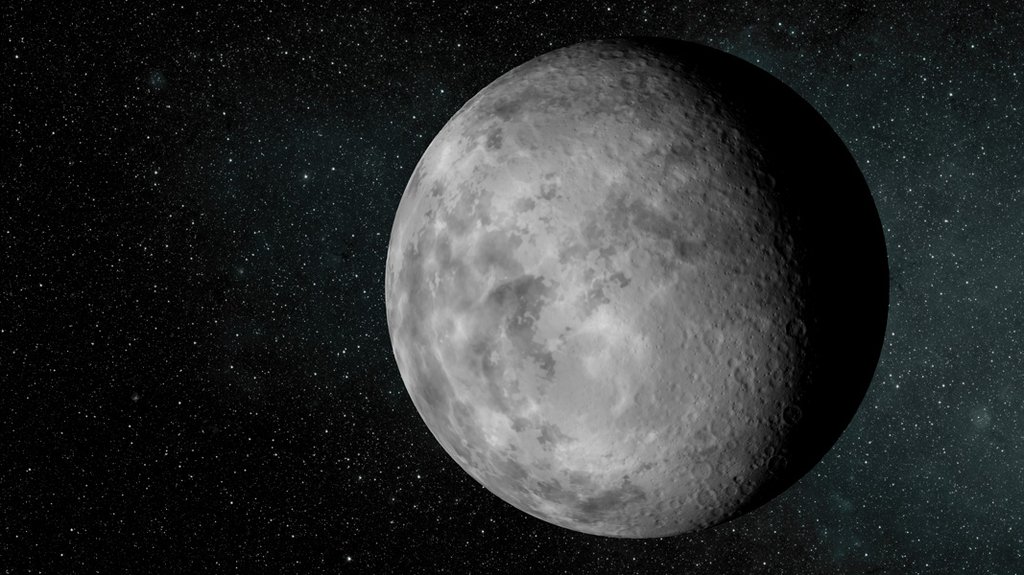 NASA's Kepler mission has discovered a new planetary system that is home to the smallest planet yet found around a star like our sun, approximately 210 light-years away in the constellation Lyra.› Full image and caption
Credit: NASA/Ames/JPL-Caltech

NASA's Kepler mission scientists have discovered a new planetary system that is home to the smallest planet yet found around a star similar to our sun.

PASADENA, Calif. -- NASA's Kepler mission scientists have discovered a new planetary system that is home to the smallest planet yet found around a star similar to our sun.

The planets are located in a system called Kepler-37, about 210 light-years from Earth in the constellation Lyra. The smallest planet, Kepler-37b, is slightly larger than our moon, measuring about one-third the size of Earth. It is smaller than Mercury, which made its detection a challenge.

The moon-size planet and its two companion planets were found by scientists with NASA's Kepler mission, which is designed to find Earth-sized planets in or near the "habitable zone," the region in a planetary system where liquid water might exist on the surface of an orbiting planet. However, while the star in Kepler-37 may be similar to our sun, the system appears quite unlike the solar system in which we live.

Astronomers think Kepler-37b does not have an atmosphere and cannot support life as we know it. The tiny planet almost certainly is rocky in composition. Kepler-37c, the closer neighboring planet, is slightly smaller than Venus, measuring almost three-quarters the size of Earth. Kepler-37d, the farther planet, is twice the size of Earth.

The first exoplanets found to orbit a normal star were giants. As technologies have advanced, smaller and smaller planets have been found, and Kepler has shown that even Earth-size exoplanets are common.

"Even Kepler can only detect such a tiny world around the brightest stars it observes," said Jack Lissauer, a planetary scientist at NASA's Ames Research Center in Moffett Field, Calif. "The fact we've discovered tiny Kepler-37b suggests such little planets are common, and more planetary wonders await as we continue to gather and analyze additional data."

Kepler-37's host star belongs to the same class as our sun, although it is slightly cooler and smaller. All three planets orbit the star at less than the distance Mercury is to the sun, suggesting they are very hot, inhospitable worlds. Kepler-37b orbits every 13 days at less than one-third Mercury's distance from the sun. The estimated surface temperature of this smoldering planet, at more than 800 degrees Fahrenheit (700 degrees Kelvin), would be hot enough to melt the zinc in a penny. Kepler-37c and Kepler-37d, orbit every 21 days and 40 days, respectively.

"We uncovered a planet smaller than any in our solar system orbiting one of the few stars that is both bright and quiet, where signal detection was possible," said Thomas Barclay, Kepler scientist at the Bay Area Environmental Research Institute in Sonoma, Calif., and lead author of the new study published in the journal Nature. "This discovery shows close-in planets can be smaller, as well as much larger, than planets orbiting our sun."

The research team used data from NASA's Kepler space telescope, which simultaneously and continuously measures the brightness of more than 150,000 stars every 30 minutes. When a planet candidate transits, or passes, in front of the star from the spacecraft's vantage point, a percentage of light from the star is blocked. This causes a dip in the brightness of the starlight that reveals the transiting planet's size relative to its star.

The size of the star must be known in order to measure the planet's size accurately. To learn more about the properties of the star Kepler-37, scientists examined sound waves generated by the boiling motion beneath the surface of the star. They probed the interior structure of Kepler-37's star just as geologists use seismic waves generated by earthquakes to probe the interior structure of Earth. The science is called asteroseismology.

The sound waves travel into the star and bring information back up to the surface. The waves cause oscillations that Kepler observes as a rapid flickering of the star's brightness. Like bells in a steeple, small stars ring at high tones while larger stars boom in lower tones. The barely discernible, high-frequency oscillations in the brightness of small stars are the most difficult to measure. This is why most objects previously subjected to asteroseismic analysis are larger than the sun.

With the very high precision of the Kepler instrument, astronomers have reached a new milestone. The star Kepler-37, with a radius just three-quarters of the sun, now is the smallest bell in the asteroseismology steeple. The radius of the star is known to three percent accuracy, which translates to exceptional accuracy in the planet's size.