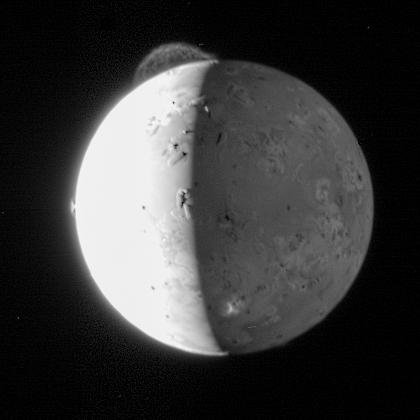 This processed image of Io by New Horizons shows the 290-kilometer-high (180-mile-high) plume of the volcano Tvashtar near Io’s north pole. Also visible is the Prometheus volcano’s much smaller plume in the 9 o’clock direction. The top of the Masubi volcano’s plume appears as an irregular bright patch near the bottom.

The Juno Waves instrument “listened” to the radio emissions from Jupiter’s immense magnetic field to find their precise locations.

By listening to the rain of electrons flowing onto Jupiter from its intensely volcanic moon Io, researchers using NASA’s Juno spacecraft have found what triggers the powerful radio emissions within the monster planet’s gigantic magnetic field. The new result sheds light on the behavior of the enormous magnetic fields generated by gas-giant planets like Jupiter.

Jupiter has the largest, most powerful magnetic field of all the planets in our solar system, with a strength at its source about 20,000 times stronger than Earth’s. It is buffeted by the solar wind, a stream of electrically charged particles and magnetic fields constantly blowing from the Sun. Depending on how hard the solar wind blows, Jupiter’s magnetic field can extend outward as much as two million miles (3.2 million kilometers) toward the Sun and stretch more than 600 million miles (over 965 million kilometers) away from the Sun, as far as Saturn's orbit. 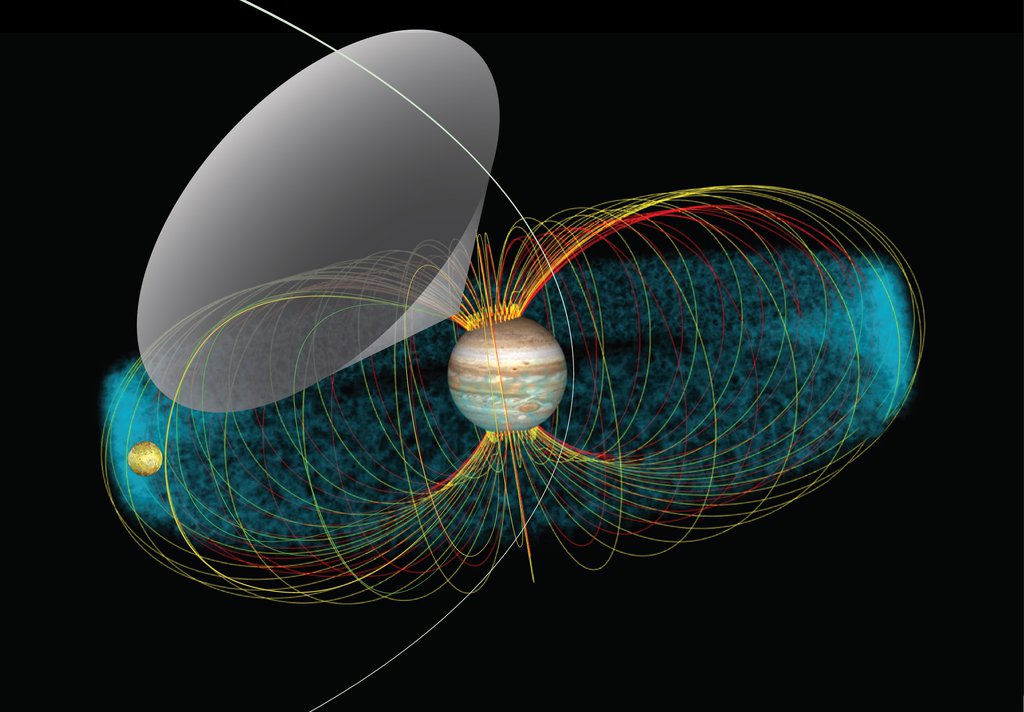 The multicolored lines in this conceptual image represent the magnetic field lines that link Io’s orbit with Jupiter’s atmosphere. Radio waves emerge from the source and propagate along the walls of a hollow cone (gray area). Juno, its orbit represented by the white line crossing the cone, receives the signal when Jupiter’s rotation sweeps that cone over the spacecraft.

Jupiter has several large moons that orbit within its massive magnetic field, with Io being the closest. Io is caught in a gravitational tug-of-war between Jupiter and the neighboring two of these other large moons, which generates internal heat that powers hundreds of volcanic eruptions across its surface.

These volcanoes collectively release one ton of material (gases and particles) per second into space near Jupiter. Some of this material splits up into electrically charged ions and electrons and is rapidly captured by Jupiter’s magnetic field. As Jupiter’s magnetic field sweeps past Io, electrons from the moon are accelerated along the magnetic field toward Jupiter’s poles. Along their way, these electrons generate “decameter” radio waves (so-called decametric radio emissions, or DAM). The Juno Waves instrument can “listen” to this radio emission that the raining electrons generate.

Juno tunes into one of its favorite radio stations. Hear the decametric radio emissions triggered by the interaction of Io with Jupiter’s magnetic field. The Waves instrument on Juno detects radio signals whenever Juno’s trajectory crosses into the beam which is a cone-shaped pattern. This beam pattern is similar to a flashlight that is only emitting a ring of light rather than a full beam. Juno scientists then translate the radio emission detected to a frequency within the audible range of the human ear.

The researchers used the Juno Waves data to identify the precise locations within Jupiter’s vast magnetic field where these radio emissions originated. These locations are where conditions are just right to generate the radio waves; they have the right magnetic field strength and the right density of electrons (not too much and not too little), according to the team.

“The radio emission is likely constant, but Juno has to be in the right spot to listen,” said Yasmina Martos of NASA’s Goddard Space Flight Center in Greenbelt, Maryland, and the University of Maryland, College Park.

The radio waves emerge from the source along the walls of a hollow cone aligned with and controlled by the strength and shape of the magnetic field of Jupiter. Juno receives the signal only when Jupiter’s rotation sweeps that cone over the spacecraft, in the same way a lighthouse beacon shines briefly upon a ship at sea. Martos is lead author of a paper about this research published in June 2020 in the Journal of Geophysical Research, Planets.

Data from Juno allowed the team to calculate that the energy of the electrons generating the radio waves was far higher than previously estimated, as much as 23 times greater. Also, the electrons do not necessarily need to come from a volcanic moon. For example, they could be in the planet’s magnetic field (magnetosphere) or come from the Sun as part of the solar wind, according to the team.

More about this project and the Juno Mission

The research was funded by the Juno Project under NASA Grants NNM06AAa75c and 699041X to the Southwest Research Institute in San Antonio, Texas, and NASA Grant NNN12AA01C to NASA’s Jet Propulsion Laboratory, a division of Caltech in Pasadena, California. The team is composed of researchers from NASA Goddard, the National Institute of Technology (KOSEN) in Tokyo, Japan; Niihama College in Niihama, Ehime, Japan, the University of Iowa, Iowa City; and the Technical University of Denmark in Kongens Lyngby, Denmark. NASA JPL manages the Juno mission for the principal investigator, Scott J. Bolton, of the Southwest Research Institute. Juno is part of NASA's New Frontiers Program, which is managed at NASA’s Marshall Space Flight Center in Huntsville, Alabama, for the agency's Science Mission Directorate in Washington. Lockheed Martin Space in Denver built and operates the spacecraft.