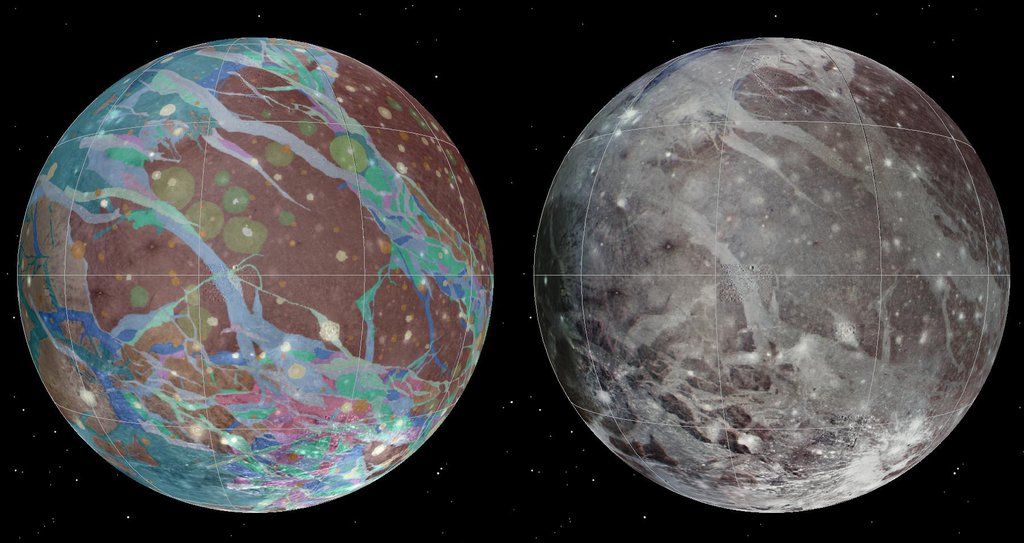 Left to right: The mosaic and geologic maps of Jupiter’s moon Ganymede were assembled incorporating the best available imagery from NASA’s Voyager 1 and 2 spacecraft and NASA’s Galileo spacecraft.

The first of the gas-giant orbiter’s back-to-back flybys will provide a close encounter with the massive moon after over 20 years.

On Monday, June 7, at 1:35 p.m. EDT (10:35 a.m. PDT), NASA’s Juno spacecraft will come within 645 miles (1,038 kilometers) of the surface of Jupiter’s largest moon, Ganymede. The flyby will be the closest a spacecraft has come to the solar system’s largest natural satellite since NASA’s Galileo spacecraft made its penultimate close approach back on May 20, 2000. Along with striking imagery, the solar-powered spacecraft’s flyby will yield insights into the moon’s composition, ionosphere, magnetosphere, and ice shell. Juno’s measurements of the radiation environment near the moon will also benefit future missions to the Jovian system.

Ganymede is bigger than the planet Mercury and is the only moon in the solar system with its own magnetosphere – a bubble-shaped region of charged particles surrounding the celestial body.

“Juno carries a suite of sensitive instruments capable of seeing Ganymede in ways never before possible,” said Juno Principal Investigator Scott Bolton of the Southwest Research Institute in San Antonio. “By flying so close, we will bring the exploration of Ganymede into the 21st century, both complementing future missions with our unique sensors and helping prepare for the next generation of missions to the Jovian system – NASA’s Europa Clipper and ESA’s [European Space Agency’s] JUpiter ICy moons Explorer [JUICE] mission.”

Animation of a rotating globe of Ganymede, with a geologic map superimposed over a global color mosaic.

“Ganymede’s ice shell has some light and dark regions, suggesting that some areas may be pure ice while other areas contain dirty ice,” said Bolton. “MWR will provide the first in-depth investigation of how the composition and structure of the ice varies with depth, leading to a better understanding of how the ice shell forms and the ongoing processes that resurface the ice over time.” The results will complement those from ESA’s forthcoming JUICE mission, which will look at the ice using radar at different wavelengths when it becomes the first spacecraft to orbit a moon other than Earth’s Moon in 2032.

Signals from Juno’s X-band and Ka-band radio wavelengths will be used to perform a radio occultation experiment to probe the moon’s tenuous ionosphere (the outer layer of an atmosphere where gases are excited by solar radiation to form ions, which have an electrical charge).

“As Juno passes behind Ganymede, radio signals will pass through Ganymede’s ionosphere, causing small changes in the frequency that should be picked up by two antennas at the Deep Space Network’s Canberra complex in Australia,” said Dustin Buccino, a signal analysis engineer for the Juno mission at JPL. “If we can measure this change, we might be able to understand the connection between Ganymede’s ionosphere, its intrinsic magnetic field, and Jupiter’s magnetosphere.”

Find out where Juno is at this moment with NASA’s interactive Eyes on the Solar System. With three giant blades stretching out some 66 feet (20 meters) from its cylindrical, six-sided body, the Juno spacecraft is a dynamic engineering marvel, spinning to keep itself stable as it makes oval-shaped orbits around Jupiter.

Normally, Juno’s Stellar Reference Unit (SRU) navigation camera is tasked with helping keep the Jupiter orbiter on course, but during the flyby it will do double duty. Along with its navigation duties, the camera – which is well shielded against radiation that could otherwise adversely affect it – will gather information on the high-energy radiation environment in the region near Ganymede by collecting a special set of images.

“The signatures from penetrating high-energy particles in Jupiter’s extreme radiation environment appear as dots, squiggles, and streaks in the images – like static on a television screen. We extract these radiation-induced noise signatures from SRU images to obtain diagnostic snapshots of the radiation levels encountered by Juno,” said Heidi Becker, Juno’s radiation monitoring lead at JPL.

Meanwhile, the Advanced Stellar Compass camera, built at the Technical University of Denmark, will count very energetic electrons that penetrate its shielding with a measurement every quarter of a second.

Also being enlisted is the JunoCam imager. Conceived to bring the excitement and beauty of Jupiter exploration to the public, the camera has provided an abundance of useful science as well during the mission’s almost five-year tenure at Jupiter. For the Ganymede flyby, JunoCam will collect images at a resolution equivalent to the best from Voyager and Galileo. The Juno science team will scour the images, comparing them to those from previous missions, looking for changes in surface features that might have occurred over four-plus decades. Any changes to crater distribution on the surface could help astronomers better understand the current population of objects that impact moons in the outer solar system.

Due to the speed of the flyby, the icy moon will – from JunoCam’s viewpoint – go from being a point of light to a viewable disk then back to a point of light in about 25 minutes. So that’s just enough time for five images.