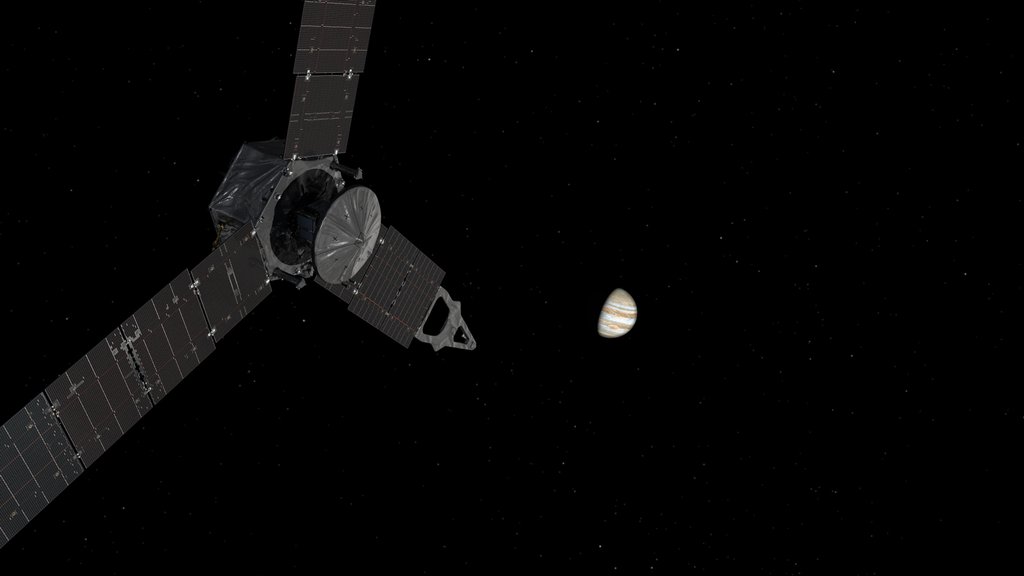 At about 12:15 pm PDT today (3:15 p.m. EDT), mission controllers will transmit command product "ji4040" into deep space, to transition the solar-powered Juno spacecraft into autopilot. It will take nearly 48 minutes for the signal to cover the 534-million-mile (860-million-kilometer) distance between the Deep Space Network Antenna in Goldstone, California, to the Juno spacecraft. While sequence ji4040 is only one of four command products sent up to the spacecraft that day, it holds a special place in the hearts of the Juno mission team.

"Ji4040 contains the command that starts the Jupiter Orbit insertion sequence," said Ed Hirst, mission manager of Juno from NASA's Jet Propulsion Laboratory in Pasadena, California. "As soon as it initiates -- which should be in less than a second -- Juno will send us data that the command sequence has started."

When the sequence kicks in, the spacecraft will begin running the software program tailored to carry the solar-powered, basketball court-sized spacecraft through the 35-minute burn that will place it in orbit around Jupiter.

"After the sequence executes, Juno is on autopilot," said Hirst. "But that doesn't mean we get to go home. We are monitoring the spacecraft's activities 24/7 and will do so until well after we are in orbit."

Also today, NASA announced a collaboration with Apple that will serve to enhance the agency's efforts to inform and excite the public about dramatic missions of exploration like Juno. "Destination: Juno" is a synergy between two seemingly disparate worlds: popular music and interplanetary exploration. The works resulting from this collaboration showcase exploratory sounds from artists who have been inspired by Juno and other NASA missions, including Brad Paisley, Corinne Bailey Rae, GZA, Jim James featuring Lydia Tyrell, QUIÑ, Trent Reznor & Atticus Ross, Weezer and Zoé.

Apple has captured moments in this journey with a behind-the-scenes documentary spearheaded by the Juno mission's principal investigator, Scott Bolton, and scored by Academy Award winners Trent Reznor and Atticus Ross. The content is available on various Apple platforms. Other Juno-related content, including educational opportunities with Bill Nye on and an "Interactive Guide to NASA's Juno Mission," will roll out over the course of a year and throughout the length of the Juno mission.