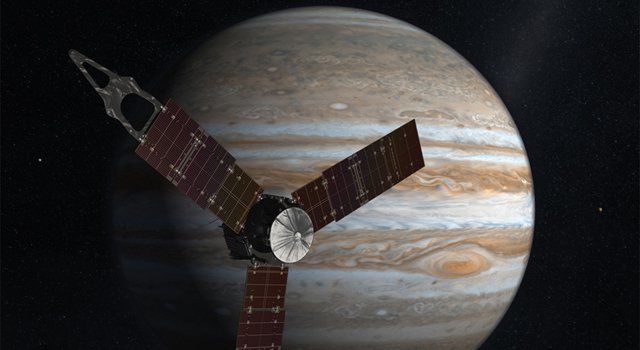 NASA's Juno spacecraft passes in front of Jupiter in this artist's depiction. Juno, the second mission in NASA's New Frontiers program, will improve our understanding of the solar system by advancing studies of the origin and evolution of Jupiter.› Full image and caption
Credit: NASA/JPL-Caltech

PASADENA, Calif. -- NASA's solar-powered Juno spacecraft successfully refined its flight path Wednesday with the mission's first trajectory correction maneuver. The maneuver took place on Feb. 1. It is the first of a dozen planned rocket firings that, over the next five years, will keep Juno on course for its rendezvous with Jupiter.

"We had a maneuver planned soon after launch but our Atlas V rocket gave us such a good ride we didn't need to make any trajectory changes," said Rick Nybakken, Juno project manager from NASA's Jet Propulsion Laboratory in Pasadena, Calif. "It is good to get another first under our belt. This burn couldn't have gone any better."

The trajectory correction maneuver, which adjusts the spacecraft's flight path, began at 10:10 a.m. PST (1:10 p.m. EST) on Feb. 1. The Juno spacecraft's thrusters fired for 25 minutes, consumed about 6.9 pounds (3.11 kilograms) of fuel and changed the spacecraft's speed by 3.9 feet, or 1.2 meters, per second. The next big maneuver for Juno will occur in late August of 2012 when Juno executes its first of two deep space maneuvers to set the stage for its Earth flyby - and gravity assist - on its way to Jupiter.

Launched on Aug. 5, 2011, Juno is 182 days and 279 million miles (449 million kilometers) into its five-year, 1,740-million-mile (2,800-million-kilometer) journey to Jupiter. Once in orbit, the spacecraft will orbit the planet's poles 33 times and use its collection of eight science instruments to probe beneath the gas giant's obscuring cloud cover to learn more about Jupiter's origins, structure, atmosphere and magnetosphere, and look for a potential solid planetary core.