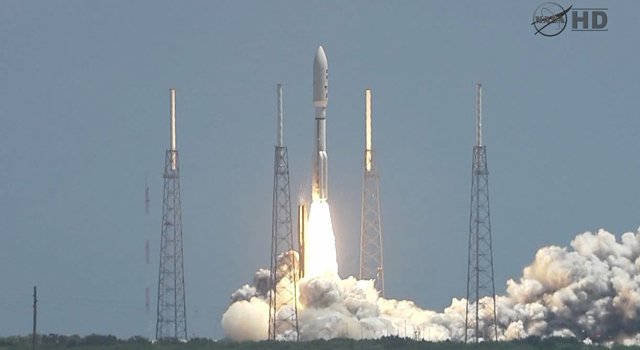 Update: Engineers have received communications from the Juno spacecraft, and its solar arrays have deployed.

Juno's detailed study of the largest planet in our solar system will help reveal Jupiter's origin and evolution. As the archetype of giant gas planets, Jupiter can help scientists understand the origin of our solar system and learn more about planetary systems around other stars.

"Today, with the launch of the Juno spacecraft, NASA began a journey to yet another new frontier," NASA Administrator Charles Bolden said. "The future of exploration includes cutting-edge science like this to help us better understand our solar system and an ever-increasing array of challenging destinations."

After Juno's launch aboard an Atlas V rocket, mission controllers now await telemetry from the spacecraft indicating it has achieved its proper orientation, and that its massive solar arrays, the biggest on any NASA deep-space probe, have deployed and are generating power.

"We are on our way, and early indications show we are on our planned trajectory," said Jan Chodas, Juno project manager at NASA's Jet Propulsion Laboratory in Pasadena, Calif. "We will know more about Juno's status in a couple hours after its radios are energized and the signal is acquired by the Deep Space Network antennas at Canberra."

Juno will cover the distance from Earth to the moon (about 250,000 miles or 402,336 kilometers) in less than one day's time. It will take another five years and 1,740 million miles (2,800 million kilometers) to complete the journey to Jupiter. The spacecraft will orbit the planet's poles 33 times and use its collection of eight science instruments to probe beneath the gas giant's obscuring cloud cover to learn more about its origins, structure, atmosphere and magnetosphere, and look for a potential solid planetary core.

With four large moons and many smaller moons, Jupiter forms its own miniature solar system. Its composition resembles that of a star, and if it had been about 80 times more massive, the planet could have become a star instead.

"Jupiter is the Rosetta Stone of our solar system," said Scott Bolton, Juno's principal investigator from the Southwest Research Institute in San Antonio. "It is by far the oldest planet, contains more material than all the other planets, asteroids and comets combined, and carries deep inside it the story of not only the solar system but of us. Juno is going there as our emissary -- to interpret what Jupiter has to say."

The NASA Deep Space Network -- or DSN -- is an international network of antennas that supports interplanetary spacecraft missions and radio and radar astronomy observations for the exploration of the solar system and the universe. The network also supports selected Earth-orbiting missions.

JPL manages the Juno mission for the principal investigator, Scott Bolton, of Southwest Research Institute in San Antonio. The Juno mission is part of the New Frontiers Program managed at NASA's Marshall Space Flight Center in Huntsville, Ala. Lockheed Martin Space Systems, Denver, built the spacecraft. Launch management for the mission is the responsibility of NASA's Launch Services Program at the Kennedy Space Center in Florida. JPL is a division of the California Institute of Technology in Pasadena.