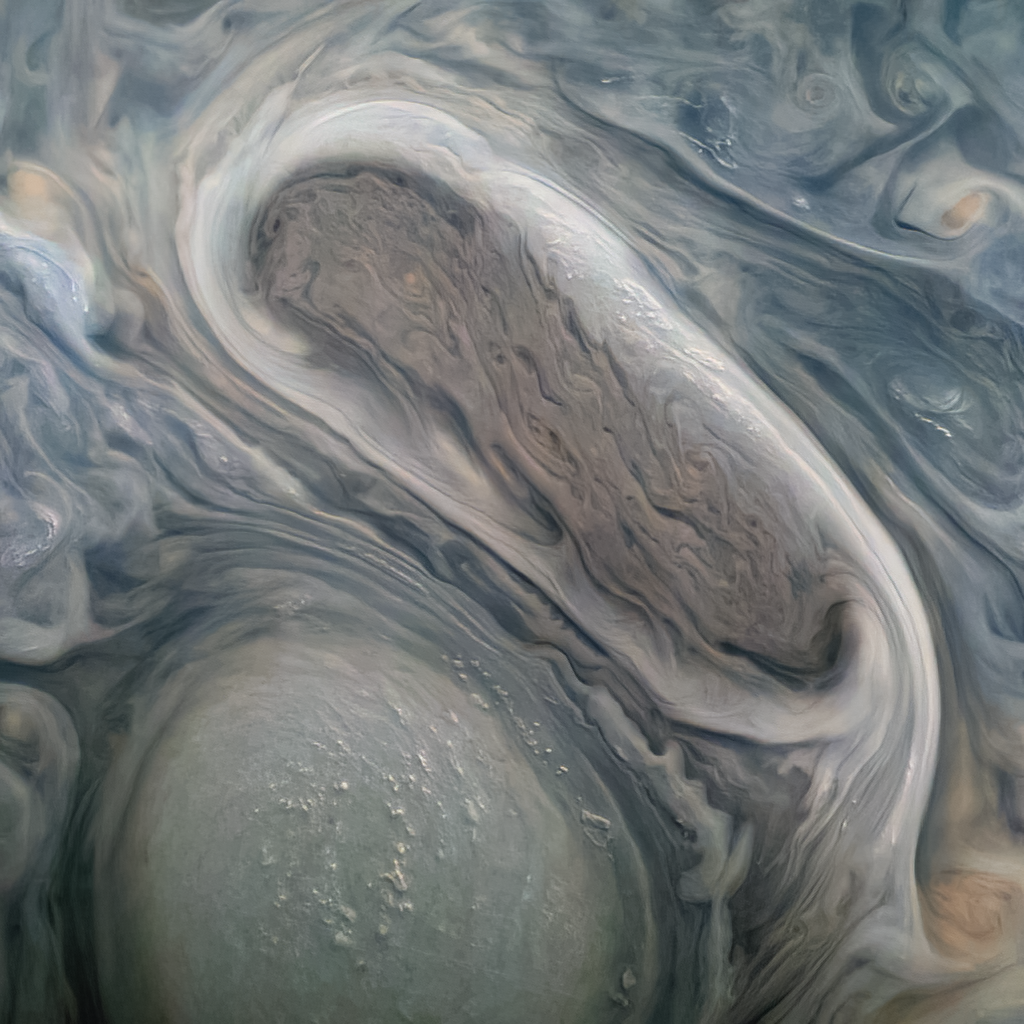 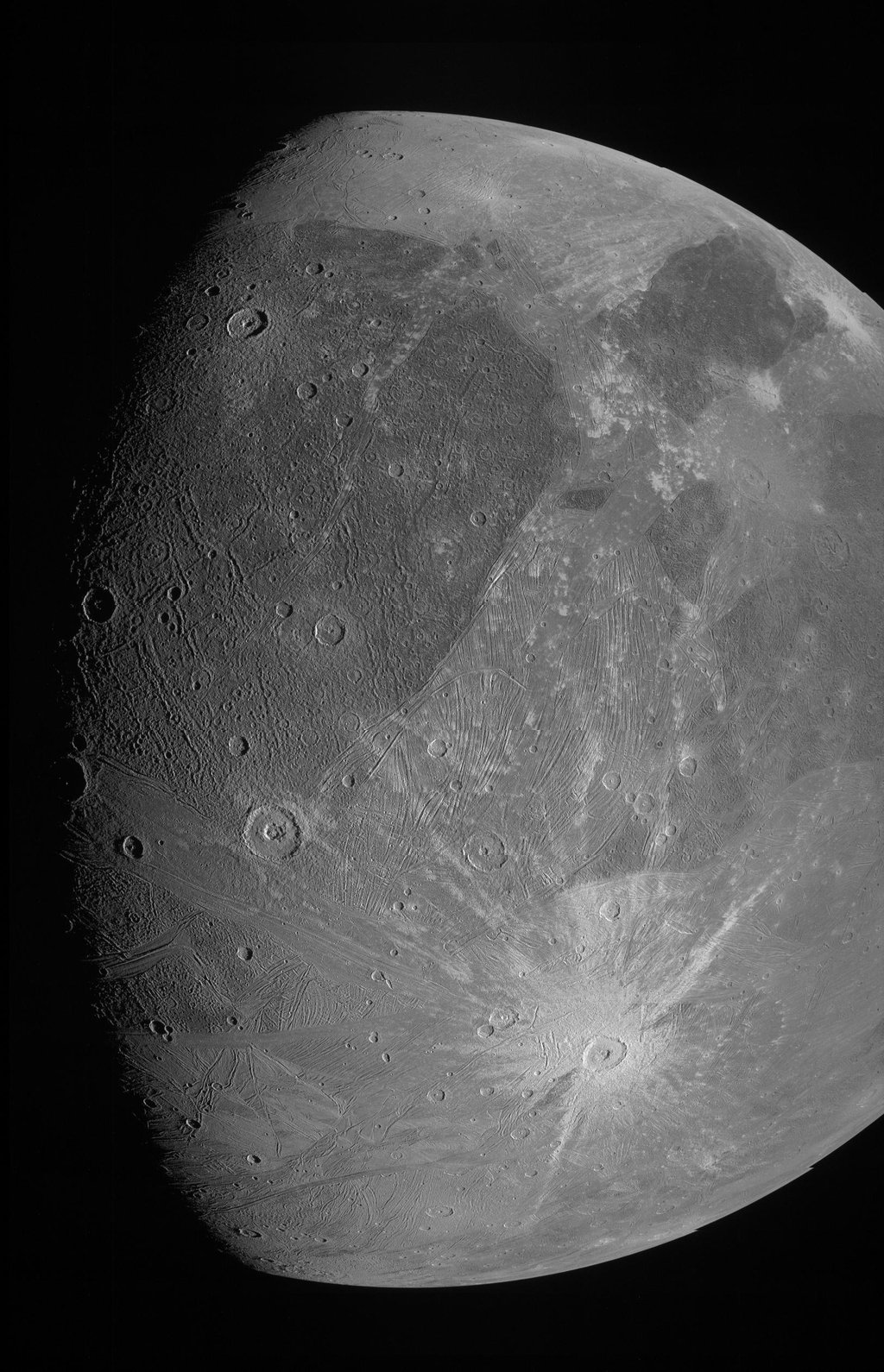 This image of the Jovian moon Ganymede was obtained by the JunoCam imager aboard NASA's Juno spacecraft during its June 7, 2021, flyby of the icy moon.

An audio track collected during Jupiter mission’s Ganymede flyby offers a dramatic ride-along. It is one of the highlights mission scientists shared in a briefing at American Geophysical Union Fall Meeting.

Sounds from a Ganymede flyby, magnetic fields, and remarkable comparisons between Jupiter and Earth’s oceans and atmospheres were discussed during a briefing today on NASA’s Juno mission to Jupiter at the American Geophysical Union Fall Meeting in New Orleans.

Juno Principal Investigator Scott Bolton of the Southwest Research Institute in San Antonio has debuted a 50-second audio track generated from data collected during the mission’s close flyby of the Jovian moon Ganymede on June 7, 2021. Juno’s Waves instrument, which tunes in to electric and magnetic radio waves produced in Jupiter’s magnetosphere, collected the data on those emissions. Their frequency was then shifted into the audio range to make the audio track.

“This soundtrack is just wild enough to make you feel as if you were riding along as Juno sails past Ganymede for the first time in more than two decades,” said Bolton. “If you listen closely, you can hear the abrupt change to higher frequencies around the midpoint of the recording, which represents entry into a different region in Ganymede's magnetosphere.”

Radio emissions collected during Juno’s June 7, 2021, flyby of Jupiter’s moon Ganymede are presented here, both visually and in sound.

Detailed analysis and modeling of the Waves data are ongoing. “It is possible the change in the frequency shortly after closest approach is due to passing from the nightside to the dayside of Ganymede,” said William Kurth of the University of Iowa in Iowa City, lead co-investigator for the Waves investigation.

At the time of Juno’s closest approach to Ganymede – during the mission’s 34th trip around Jupiter – the spacecraft was within 645 miles (1,038 kilometers) of the moon’s surface and traveling at a relative velocity of 41,600 mph (67,000 kph).

Jack Connerney from NASA’s Goddard Space Flight Center in Greenbelt, Maryland, is the lead investigator with Juno’s magnetometer and is the mission’s deputy principal investigator. His team has produced the most detailed map ever obtained of Jupiter’s magnetic field.

Compiled from data collected from 32 orbits during Juno’s prime mission, the map provides new insights into the gas giant’s mysterious Great Blue Spot, a magnetic anomaly at the planet’s equator. Juno data indicates that a change in the gas giant’s magnetic field has occurred during the spacecraft’s five years in orbit, and that the Great Blue Spot is drifting eastward at a speed of about 2 inches (4 centimeters) per second relative to the rest of Jupiter’s interior, lapping the planet in about 350 years.

In contrast, the Great Red Spot – the long-lived atmospheric anticyclone just south of Jupiter’s equator – is drifting westward at a relatively rapid clip, circling the planet in about four-and-a-half years.

In addition, the new map shows that Jupiter’s zonal winds (jet streams that run east to west and west to east, giving Jupiter’s its distinctive banded appearance) are pulling the Great Blue Spot apart. This means that the zonal winds measured on the surface of the planet reach deep into the planet’s interior.

The new magnetic field map also allows Juno scientists to make comparisons with Earth’s magnetic field. The data suggests to the team that dynamo action – the mechanism by which a celestial body generates a magnetic field – in Jupiter’s interior occurs in metallic hydrogen, beneath a layer expressing “helium rain.”

Data Juno collects during its extended mission may further unravel the mysteries of the dynamo effect not only at Jupiter but those of other planets, including Earth.

Left to right: A phytoplankton bloom in the Norwegian Sea, and turbulent clouds in Jupiter’s atmosphere. Jupiter images provided by NASA’s Juno spacecraft have given oceanographers the raw materials to study the rich turbulence at the gas giant’s poles and the physical forces that drive large cyclones on Jupiter.

Lia Siegelman, a physical oceanographer and postdoctoral fellow at Scripps Institution of Oceanography at the University of California, San Diego, decided to study the dynamics of Jupiter’s atmosphere after noticing that the cyclones at Jupiter’s pole appear to share similarities with ocean vortices she studied during her time as a doctoral student.

“When I saw the richness of the turbulence around the Jovian cyclones, with all the filaments and smaller eddies, it reminded me of the turbulence you see in the ocean around eddies,” said Siegelman. “These are especially evident in high-resolution satellite images of vortices in Earth’s oceans that are revealed by plankton blooms that act as tracers of the flow.”

The simplified model of Jupiter’s pole shows that geometric patterns of vortices, like those observed on Jupiter, spontaneously emerge, and survive forever. This means that the basic geometrical configuration of the planet allows these intriguing structures to form.

Although Jupiter’s energy system is on a scale much larger than Earth’s, understanding the dynamics of the Jovian atmosphere could help us understand the physical mechanisms at play on our own planet.

The Juno team has also released its latest image of Jupiter’s faint dust ring, taken from inside the ring looking out by the spacecraft’s Stellar Reference Unit navigation camera. The brightest of the thin bands and neighboring dark regions scene in the image are linked to dust generated by two of Jupiter’s small moons, Metis and Adrastea. The image also captures the arm of the constellation Perseus.

“It is breathtaking that we can gaze at these familiar constellations from a spacecraft a half-billion miles away,” said Heidi Becker, lead co-investigator of Juno’s Stellar Reference Unit instrument at NASA’s Jet Propulsion Laboratory in Pasadena. “But everything looks pretty much the same as when we appreciate them from our backyards here on Earth. It’s an awe-inspiring reminder of how small we are and how much there is left to explore.”