This chart presents data the Waves investigation on NASA's Juno spacecraft recorded as the spacecraft crossed the bow shock just outside of Jupiter's magnetosphere on June 24, 2016.› Full image and caption
Credit: NASA/JPL-Caltech/SwRI/Univ. of Iowa 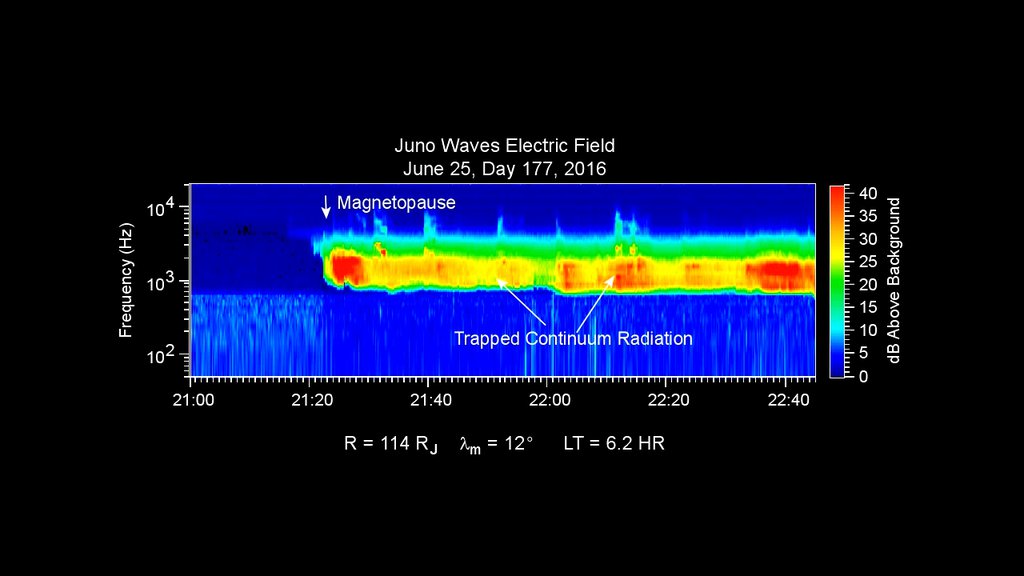 This chart presents data that the Waves investigation on NASA's Juno spacecraft recorded as the spacecraft entered Jupiter's magnetosphere on June 25, 2016, while approaching Jupiter.› Full image and caption
Credit: NASA/JPL-Caltech/SwRI/Univ. of Iowa 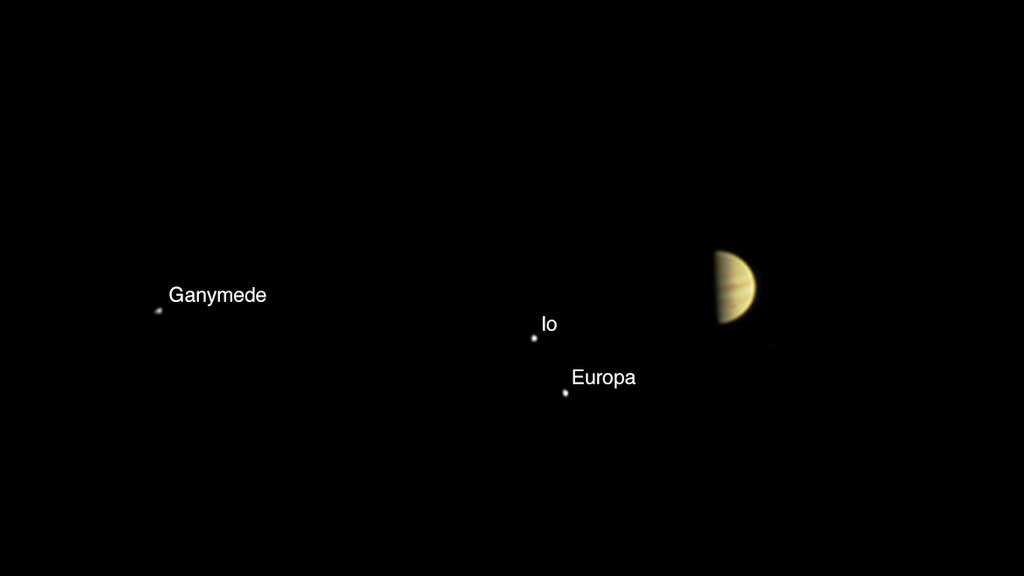 Juno is on course to swing into orbit around Jupiter on July 4. Science instruments on board detected changes in the particles and fields around the spacecraft as it passed from an environment dominated by the interplanetary solar wind into Jupiter's magnetosphere. Data from Juno's Waves investigation, presented as audio stream and color animation, indicate the spacecraft's crossing of the bow shock just outside the magnetosphere on June 24 and the transit into the lower density of the Jovian magnetosphere on June 25.

"The bow shock is analogous to a sonic boom," said William Kurth of the University of Iowa in Iowa City, lead co-investigator for the Waves investigation. "The solar wind blows past all the planets at a speed of about a million miles per hour, and where it hits an obstacle, there's all this turbulence."

The obstacle is Jupiter's magnetosphere, which is the largest structure in the solar system.

"If Jupiter's magnetosphere glowed in visible light, it would be twice the size of the full moon as seen from Earth," Kurth said. And that's the shorter dimension of the teardrop-shaped structure; the dimension extending outward behind Jupiter has a length about five times the distance between Earth and the sun.

Out in the solar wind a few days ago, Juno was speeding through an environment that has about 16 particles per cubic inch (one per cubic centimeter). Once it crossed into the magnetosphere, the density was about a hundredfold less. The density is expected to climb again, inside the magnetosphere, as the spacecraft gets closer to Jupiter itself. The motions of these particles traveling under the control of Jupiter's magnetic field will be one type of evidence Juno examines for clues about Jupiter's deep interior.

While this transition from the solar wind into the magnetosphere was predicted to occur at some point in time, the structure of the boundary between those two regions proved to be unexpectedly complex, with different instruments reporting unusual signatures both before and after the nominal crossing.

"This unusual boundary structure will itself be the subject of scientific investigation," said Barry Mauk of the Johns Hopkins University Applied Physics Laboratory, Laurel, Maryland, who is the instrument lead for the Jupiter Energetic-Particle Detector Instrument (JEDI) on Juno.