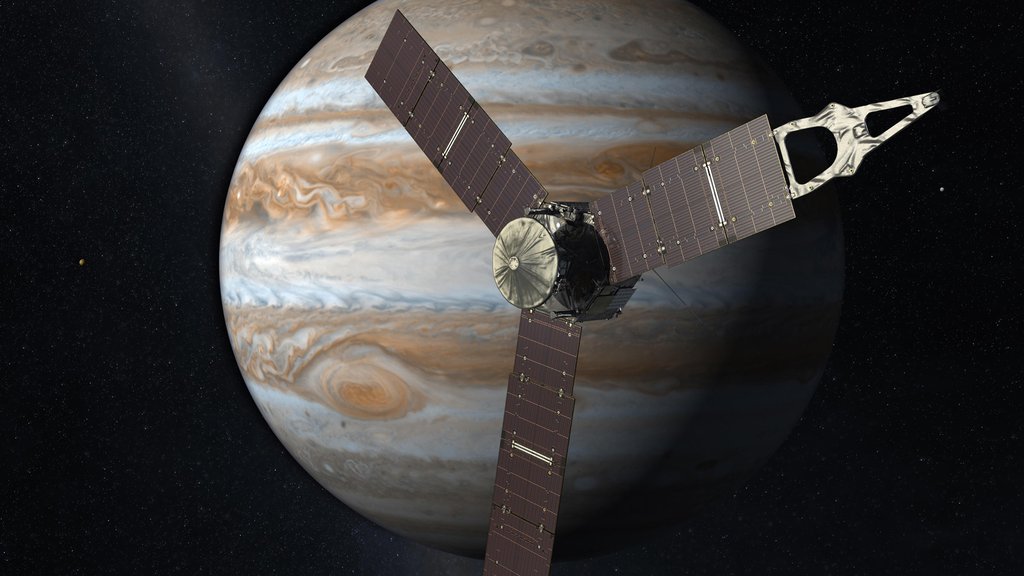 Launching from Earth in 2011, the Juno spacecraft will arrive at Jupiter in 2016 to study the giant planet from an elliptical, polar orbit.› Full image and caption
Credit: NASA/JPL-Caltech

NASA's Juno mission to Jupiter has broken the record to become humanity's most distant solar-powered emissary.

NASA's Juno mission to Jupiter has broken the record to become humanity's most distant solar-powered emissary. The milestone occurred at 11 a.m. PST (2 p.m. EST, 19:00 UTC) on Wednesday, Jan. 13, when Juno was about 493 million miles (793 million kilometers) from the sun.

The previous record-holder was the European Space Agency's Rosetta spacecraft, whose orbit peaked out at the 492-million-mile (792-million-kilometer) mark in October 2012, during its approach to comet 67P/Churyumov-Gerasimenko.

"Juno is all about pushing the edge of technology to help us learn about our origins," said Scott Bolton, Juno principal investigator at the Southwest Research Institute in San Antonio. "We use every known technique to see through Jupiter's clouds and reveal the secrets Jupiter holds of our solar system's early history. It just seems right that the sun is helping us learn about the origin of Jupiter and the other planets that orbit it."

Launched in 2011, Juno is the first solar-powered spacecraft designed to operate at such a great distance from the sun. That's why the surface area of solar panels required to generate adequate power is quite large. The four-ton Juno spacecraft carries three 30-foot-long (9-meter) solar arrays festooned with 18,698 individual solar cells. At Earth distance from the sun, the cells have the potential to generate approximately 14 kilowatts of electricity. But transport those same rectangles of silicon and gallium arsenide to a fifth rock from the sun distance, and it's a powerfully different story.

"Jupiter is five times farther from the sun than Earth, and the sunlight that reaches that far out packs 25 times less punch," said Rick Nybakken, Juno's project manager from NASA's Jet Propulsion Laboratory in Pasadena, Calif. "While our massive solar arrays will be generating only 500 watts when we are at Jupiter, Juno is very efficiently designed, and it will be more than enough to get the job done."

Prior to Juno, eight spacecraft have navigated the cold, harsh underlit realities of deep space as far out as Jupiter. All have used nuclear power sources to get their job done. Solar power is possible on Juno due to improved solar-cell performance, energy-efficient instruments and spacecraft, a mission design that can avoid Jupiter's shadow, and a polar orbit that minimizes the total radiation. Juno's maximum distance from the sun during its 16-month science mission will be about 517 million miles (832 million kilometers), an almost five percent increase in the record for solar-powered space vehicles.

"It is cool we got the record and that our dedicated team of engineers and scientists can chalk up another first in space exploration," said Bolton. "But the best is yet to come. We are achieving these records and venturing so far out for a reason -- to better understand the biggest world in our solar system and thereby better understand where we came from."

Juno will arrive at Jupiter on July 4 of this year. Over the next year the spacecraft will orbit the Jovian world 33 times, skimming to within 3,100 miles (5,000 kilometers) above the planet's cloud tops every 14 days. During the flybys, Juno will probe beneath the obscuring cloud cover of Jupiter and study Jupiter's aurorae to learn more about the planet's origins, structure, atmosphere and magnetosphere.