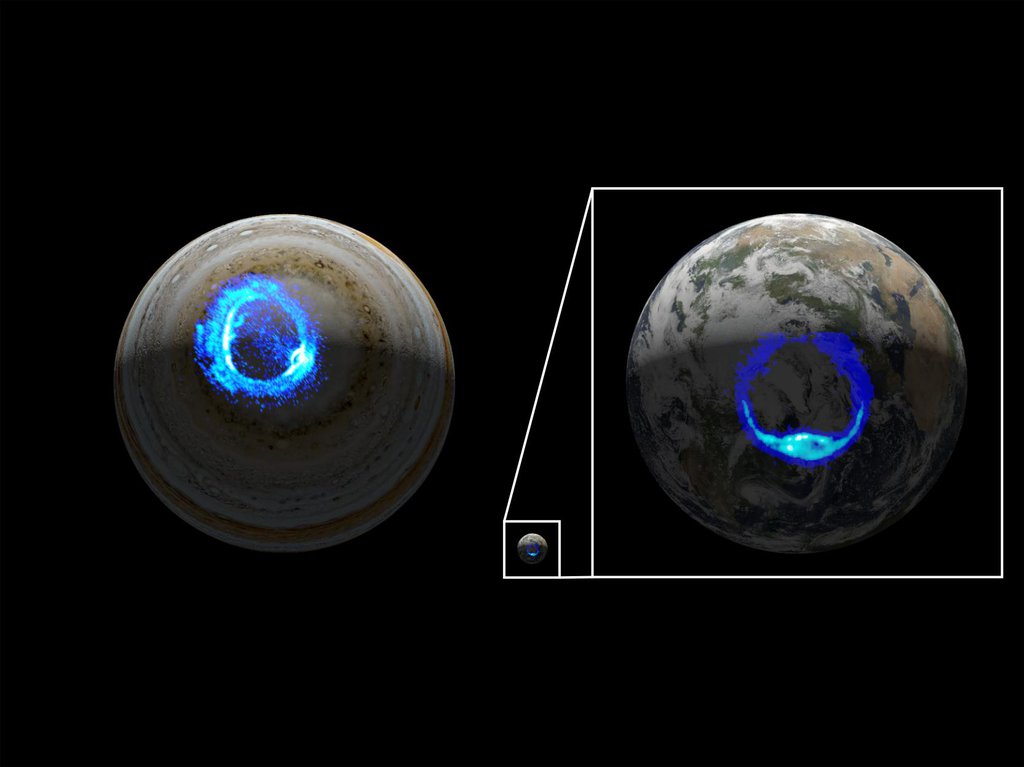 The gas-giant orbiter is illuminating the provenance of Jovian polar light shows.

New results from the Ultraviolet Spectrograph instrument on NASA’s Juno mission reveal for the first time the birth of auroral dawn storms – the early morning brightening unique to Jupiter’s spectacular aurorae. These immense, transient displays of light occur at both Jovian poles and had previously been observed only by ground-based and Earth-orbiting observatories, notably NASA’s Hubble Space Telescope. Results of this study were published March 16 in the journal AGU Advances.

First discovered by Hubble’s Faint Object Camera in 1994, dawn storms consist of short-lived but intense brightening and broadening of Jupiter’s main auroral oval – an oblong curtain of light that surrounds both poles – near where the atmosphere emerges from darkness in the early morning region. Before Juno, observations of Jovian ultraviolet aurora had offered only side views, hiding everything happening on the nightside of the planet.

“Observing Jupiter’s aurora from Earth does not allow you to see beyond the limb, into the nightside of Jupiter’s poles. Explorations by other spacecraft – Voyager, Galileo, Cassini – happened from relatively large distances and did not fly over the poles, so they could not see the complete picture,” said Bertrand Bonfond, a researcher from the University of Liège in Belgium and lead author of the study. “That’s why the Juno data is a real game changer, allowing us a better understanding what is happening on the nightside, where the dawn storms are born.”

Researchers found dawn storms are born on the nightside of the gas giant. As the planet rotates, the soon-to-be dawn storm rotates with it into the dayside, where these complex and intensely bright auroral features grow even more luminous, emitting anywhere from hundreds to thousands of gigawatts of ultraviolet light into space. The jump in brightness implies that dawn storms are dumping at least 10 times more energy into Jupiter's upper atmosphere than typical aurora.

This video clip depicts the evolution of a dawn storm in Jupiter’s polar aurorae. The imagery for the video was collected using data from the from the Ultraviolet Spectrograph instrument aboard NASA’s Juno spacecraft.

“When we looked at the whole dawn storm sequence, we couldn’t help but notice that they are very similar to a type of terrestrial auroras called substorms,” said Zhonghua Yao, co-author of the study at the University of Liège.”

Substorms result from brief disturbances in the Earth’s magnetosphere – the region of space controlled by the planet’s magnetic field – that release energy high into the planet’s ionosphere. The similarity between terrestrial and Jovian substorms is surprising because the magnetospheres of Jupiter and Earth are radically different. On Earth, the magnetosphere is essentially controlled by the interaction of the solar wind – the stream of charged particles flowing from the Sun – with Earth’s magnetic field. Jupiter’s magnetosphere is mostly populated by particles escaping from the volcanic moon Io, which then get ionized and trapped around the gas giant via its magnetic field.

These new findings will allow scientists to further study the differences and similarities driving the formation of aurora, providing a better understanding how these most beautiful of planetary phenomena occur on worlds both within our solar system and beyond.

“The power that Jupiter possesses is amazing. The energy in these dawn aurorae is yet another example of how powerful this giant planet really is,” said Scott Bolton, principal investigator of Juno from the Southwest Research Institute in San Antonio. “The dawn storm revelations are another surprise from the Juno mission, which is constantly rewriting the book on how giant planet’s work. With NASA’s recent mission extension, we’re looking forward to many more new insights and discoveries.”