This animation simulates the motion of clouds in Jupiter's Great Red Spot. The animation was made by applying a wind movement model to a mosaic of JunoCam images.› Full image and caption
Credit: NASA/JPL-Caltech/SwRI/MSSS/Gerald Eichstadt/Justin Cowart 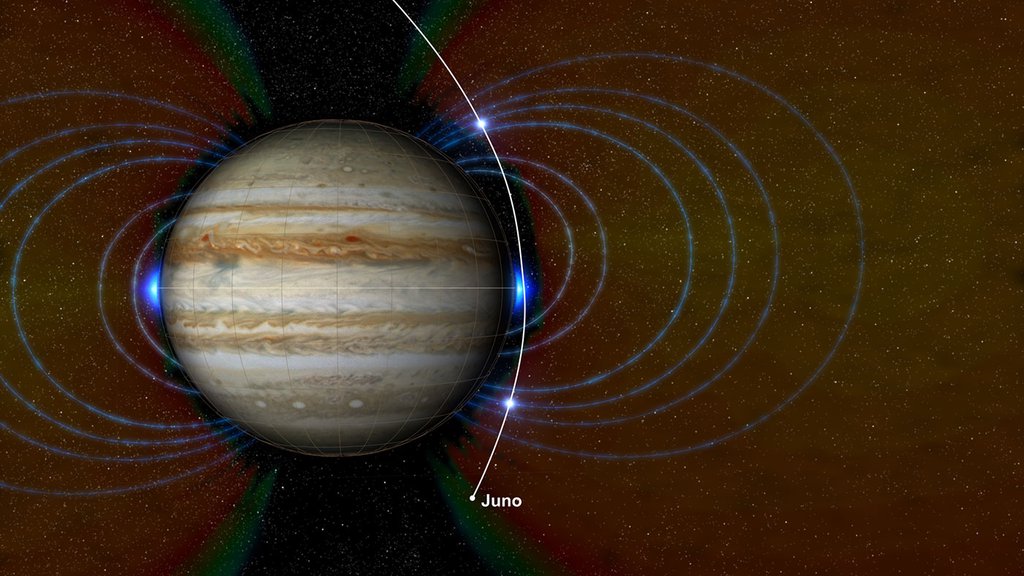 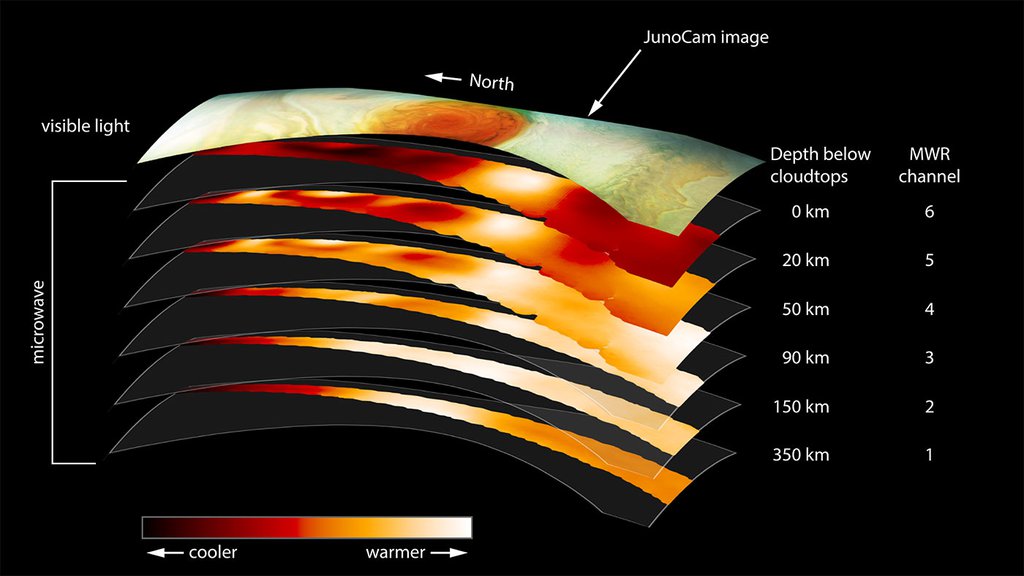 This figure gives a look down into Jupiter's Great Red Spot, using data from the microwave radiometer instrument onboard NASA's Juno spacecraft. Each of the instrument's six channels is sensitive to microwaves from different depths beneath the clouds.› Full image and caption
Credit: NASA/JPL-Caltech/SwRI

Data collected by NASA's Juno spacecraft during its first pass over Jupiter's Great Red Spot in July 2017 indicate that this iconic feature penetrates well below the clouds.

Data collected by NASA's Juno spacecraft during its first pass over Jupiter's Great Red Spot in July 2017 indicate that this iconic feature penetrates well below the clouds. Other revelations from the mission include that Jupiter has two previously uncharted radiation zones. The findings were announced Monday at the annual American Geophysical Union meeting in New Orleans.

"One of the most basic questions about Jupiter's Great Red Spot is: how deep are the roots?" said Scott Bolton, Juno's principal investigator from the Southwest Research Institute in San Antonio. "Juno data indicate that the solar system's most famous storm is almost one-and-a-half Earths wide, and has roots that penetrate about 200 miles (300 kilometers) into the planet's atmosphere."

This animation takes the viewer on a simulated flight into, and then out of, Jupiter's upper atmosphere at the location of the Great Red Spot. It was created by combining an image from the JunoCam imager on NASA's Juno spacecraft with a computer-generated animation.

The science instrument responsible for this in-depth revelation was Juno's Microwave Radiometer (MWR). "Juno's Microwave Radiometer has the unique capability to peer deep below Jupiter's clouds," said Michael Janssen, Juno co-investigator from NASA's Jet Propulsion Laboratory in Pasadena, California. "It is proving to be an excellent instrument to help us get to the bottom of what makes the Great Red Spot so great."

Jupiter's Great Red Spot is a giant oval of crimson-colored clouds in Jupiter's southern hemisphere that race counterclockwise around the oval's perimeter with wind speeds greater than any storm on Earth. Measuring 10,000 miles (16,000 kilometers) in width as of April 3, 2017, the Great Red Spot is 1.3 times as wide as Earth.

"Juno found that the Great Red Spot's roots go 50 to 100 times deeper than Earth's oceans and are warmer at the base than they are at the top," said Andy Ingersoll, professor of planetary science at Caltech and a Juno co-investigator. "Winds are associated with differences in temperature, and the warmth of the spot's base explains the ferocious winds we see at the top of the atmosphere."

"The closer you get to Jupiter, the weirder it gets," said Heidi Becker, Juno's radiation monitoring investigation lead at JPL. "We knew the radiation would probably surprise us, but we didn't think we'd find a new radiation zone that close to the planet. We only found it because Juno's unique orbit around Jupiter allows it to get really close to the cloud tops during science collection flybys, and we literally flew through it."

The new zone was identified by the Jupiter Energetic Particle Detector Instrument (JEDI) investigation. The particles are believed to be derived from energetic neutral atoms (fast-moving ions with no electric charge) created in the gas around the Jupiter moons Io and Europa. The neutral atoms then become ions as their electrons are stripped away by interaction with the upper atmosphere of Jupiter.

Juno also found signatures of a high-energy heavy ion population within the inner edges of Jupiter's relativistic electron radiation belt -- a region dominated by electrons moving close to the speed of light. The signatures are observed during Juno's high-latitude encounters with the electron belt, in regions never explored by prior spacecraft. The origin and exact species of these particles is not yet understood. Juno's Stellar Reference Unit (SRU-1) star camera detects the signatures of this population as extremely high noise signatures in images collected by the mission's radiation monitoring investigation.

To date, Juno has completed eight science passes over Jupiter. Juno's ninth science pass will be on Dec. 16.