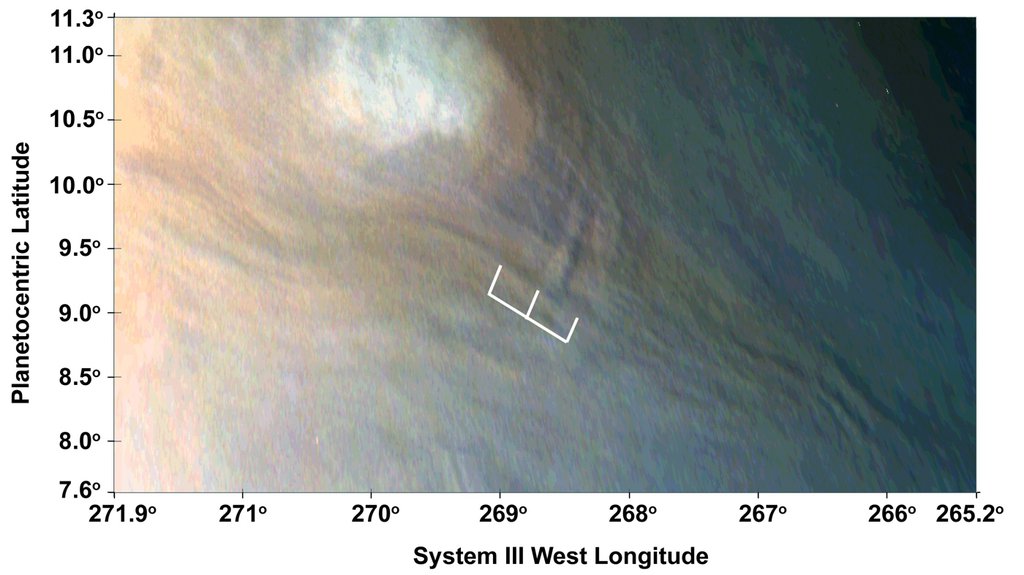 Three waves can be seen in this excerpt of a JunoCam image taken on Feb. 2, 2017, during Juno's fourth flyby of Jupiter. The region imaged in this picture is part of the visibly dark band just north of Jupiter's equator known as the North Equatorial Belt.› Full image and caption
Credit: NASA/JPL-Caltech/SwRI/MSSS/JunoCam

The JunoCam imager aboard NASA's Juno mission has resolved smaller distances between crests of atmospheric waves at Jupiter than ever seen before.

Massive structures of moving air that appear like waves in Jupiter's atmosphere were first detected by NASA's Voyager missions during their flybys of the gas-giant world in 1979. The JunoCam camera aboard NASA's Juno mission to Jupiter has also imaged the atmosphere. JunoCam data has detected atmospheric wave trains, towering atmospheric structures that trail one after the other as they roam the planet, with most concentrated near Jupiter's equator.

The JunoCam imager has resolved smaller distances between individual wave crests in these trains than ever seen before. This research provides valuable information on both the dynamics of Jupiter's atmosphere and its structure in the regions underneath the waves.

"JunoCam has counted more distinct wave trains than any other spacecraft mission since Voyager," said Glenn Orton, a Juno scientist from NASA's Jet Propulsion Laboratory in Pasadena, California. "The trains, which consist of as few as two waves and as many as several dozen, can have a distance between crests as small as about 40 miles (65 kilometers) and as large as about 760 miles (1,200 kilometers). The shadow of the wave structure in one image allowed us to estimate the height of one wave to be about 6 miles (10 kilometers) high."

"The waves can appear close to other Jovian atmospheric features, near vortices or along flow lines, and others exhibit no relationship with anything nearby," said Orton. "Some wave trains appear as if they are converging, and others appear to be overlapping, possibly at two different atmospheric levels. In one case, wave fronts appear to be radiating outward from the center of a cyclone."

Although analysis is ongoing, most waves are expected to be atmospheric gravity waves - up-and-down ripples that form in the atmosphere above something that disturbs air flow, such as a thunderstorm updraft, disruptions of flow around other features, or from some other disturbance that JunoCam does not detect.

The JunoCam instrument is uniquely qualified to make such a discovery. JunoCam is a color, visible-light camera which offers a wide-angle field of view designed to capture remarkable pictures of Jupiter's poles and cloud tops. As Juno's eyes, it helps provide context for the spacecraft's other instruments. JunoCam was included on the spacecraft primarily for public engagement purposes, although its images also are helpful to the science team.

Juno launched on Aug. 5, 2011, from Cape Canaveral, Florida, and arrived in orbit around Jupiter on July 4, 2016. To date, it has completed 15 science passes over Jupiter. Juno's 16th science pass will be on Oct. 29. During these flybys, Juno is probing beneath the obscuring cloud cover of Jupiter and studying its auroras to learn more about the planet's origins, structure, atmosphere and magnetosphere.

JPL manages the Juno mission for the principal investigator, Scott Bolton, of Southwest Research Institute in San Antonio. The Juno mission is part of the New Frontiers Program managed by NASA's Marshall Space Flight Center in Huntsville, Alabama, for the Science Mission Directorate. Lockheed Martin Space Systems in Denver, Colorado, built the spacecraft. JPL is a division of Caltech in Pasadena, California.