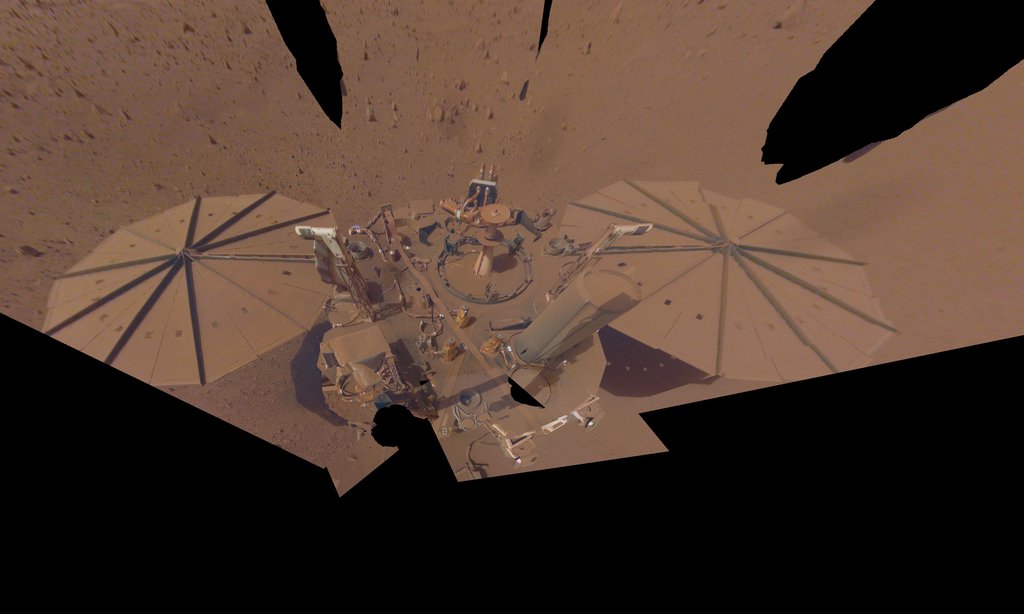 NASA’s InSight Mars lander took this final selfie on April 24, 2022, the 1,211th Martian day, or sol, of the mission. The lander’s solar panels have become covered with dust since the lander touched down on Mars in November 2018, which has led to a gradual decline in its power level.

InSight’s team is taking steps to help the solar-powered lander continue operating for as long as possible.

NASA’s InSight mission, which is expected to end in the near future, saw a recent drop in power generated by its solar panels as a continent-size dust storm swirls over Mars’ southern hemisphere. First observed on Sept. 21, 2022, by NASA’s Mars Reconnaissance Orbiter (MRO), the storm is roughly 2,175 miles (3,500 kilometers) from InSight and initially had little impact on the lander.

The mission carefully monitors the lander’s power level, which has been steadily declining as dust accumulates on its solar arrays. By Monday, Oct. 3, the storm had grown large enough and was lofting so much dust that the thickness of the dusty haze in the Martian atmosphere had increased by nearly 40% around InSight. With less sunlight reaching the lander’s panels, its energy fell from 425 watt-hours per Martian day, or sol, to just 275 watt-hours per sol.

InSight’s seismometer has been operating for about 24 hours every other Martian day. But the drop in solar power does not leave enough energy to completely charge the batteries every sol. At the current rate of discharge, the lander would be able to operate only for several weeks. So to conserve energy, the mission will turn off InSight’s seismometer for the next two weeks.

“We were at about the bottom rung of our ladder when it comes to power. Now we’re on the ground floor,” said InSight’s project manager, Chuck Scott of NASA’s Jet Propulsion Laboratory in Southern California. “If we can ride this out, we can keep operating into winter – but I’d worry about the next storm that comes along.”

The team had estimated that InSight’s mission would end sometime between late October of this year and January 2023, based on predictions of how much the dust on its solar panels will reduce its power generation. The lander has long-since surpassed its primary mission and is now close to the end of its extended mission, conducting “bonus science” by measuring marsquakes, which reveal details about the deep interior of the Red Planet. 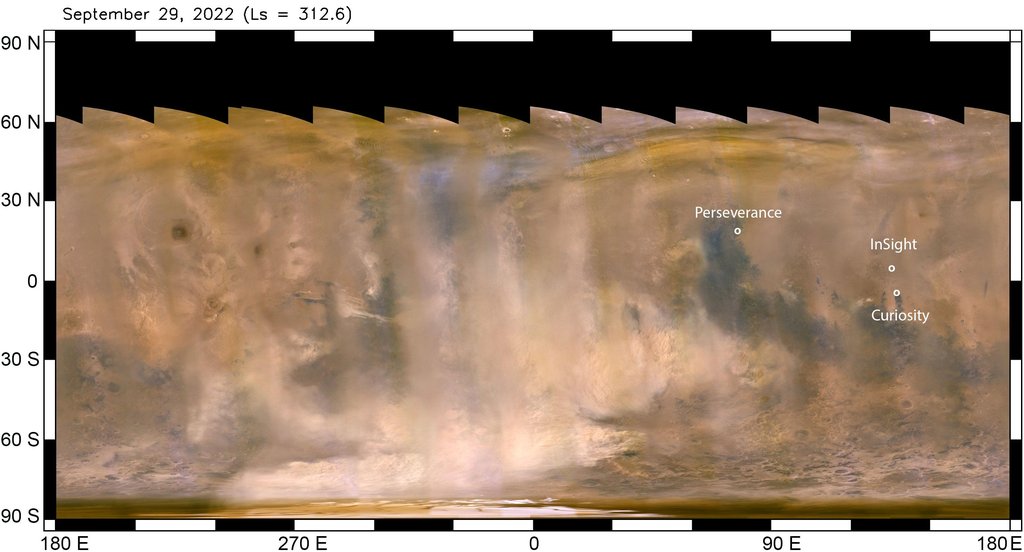 There are signs that this large, regional storm has peaked and entered its decay phase: MRO’s Mars Climate Sounder instrument, which measures the heating caused by dust absorbing sunlight, sees the storm’s growth slowing down. And the dust-raising clouds observed in pictures from the orbiter’s Mars Color Imager camera, which creates daily global maps of the Red Planet and was the first instrument to spot the storm, are not expanding as rapidly as before.

This regional storm isn’t a surprise: It’s the third storm of its kind that’s been seen this year. In fact, Mars dust storms occur at all times of the Martian year, although more of them – and bigger ones – occur during northern fall and winter, which is coming to an end.

Mars dust storms aren’t as violent or dramatic as Hollywood portrays them. While winds can blow up to 60 miles per hour (97 kilometers per hour), the Martian air is thin enough that it has just a fraction of the strength of storms on Earth. Mostly, the storms are messy: They toss billowing dust high into the atmosphere, which slowly drops back down, sometimes taking weeks.

On rare occasions, scientists have seen dust storms grow into planet-encircling dust events, which cover almost all of Mars. One of these planet-size dust storms brought NASA’s solar-powered Opportunity rover to an end in 2018.

Because they’re nuclear-powered, NASA’s Curiosity and Perseverance rovers have nothing to worry about in terms a dust storm affecting their energy. But the solar-powered Ingenuity helicopter has noticed the overall increase in background haze.

Besides monitoring storms for the safety of NASA missions on the Martian surface, MRO has spent 17 years collecting invaluable data about how and why these storms form. “We’re trying to capture the patterns of these storms so we can better predict when they’re about to happen,” Zurek said. “We learn more about Mars’ atmosphere with each one we observe.”

NASA’s Jet Propulsion Laboratory, a division of Caltech in Pasadena, California, manages InSight for the agency’s Science Mission Directorate in Washington. InSight is part of NASA’s Discovery Program, managed by the agency’s Marshall Space Flight Center in Huntsville, Alabama. Lockheed Martin Space in Denver built the InSight spacecraft, including its cruise stage and lander, and supports spacecraft operations for the mission.