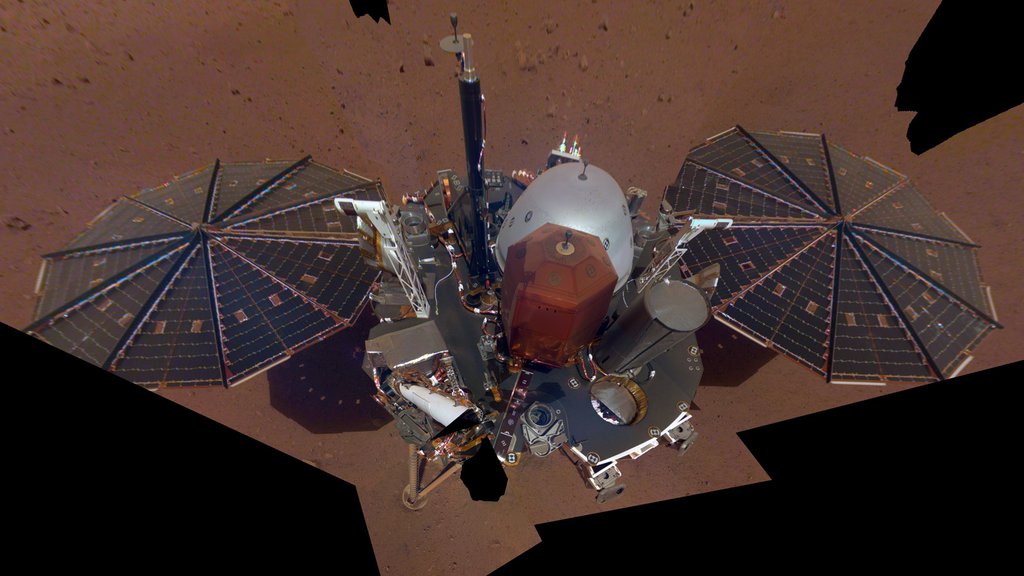 This is NASA InSight's first selfie on Mars. It displays the lander's solar panels and deck. On top of the deck are its science instruments, weather sensor booms and UHF antenna. The selfie was taken on Dec. 6, 2018 (Sol 10).› Full image and caption
Credit: NASA/JPL-Caltech 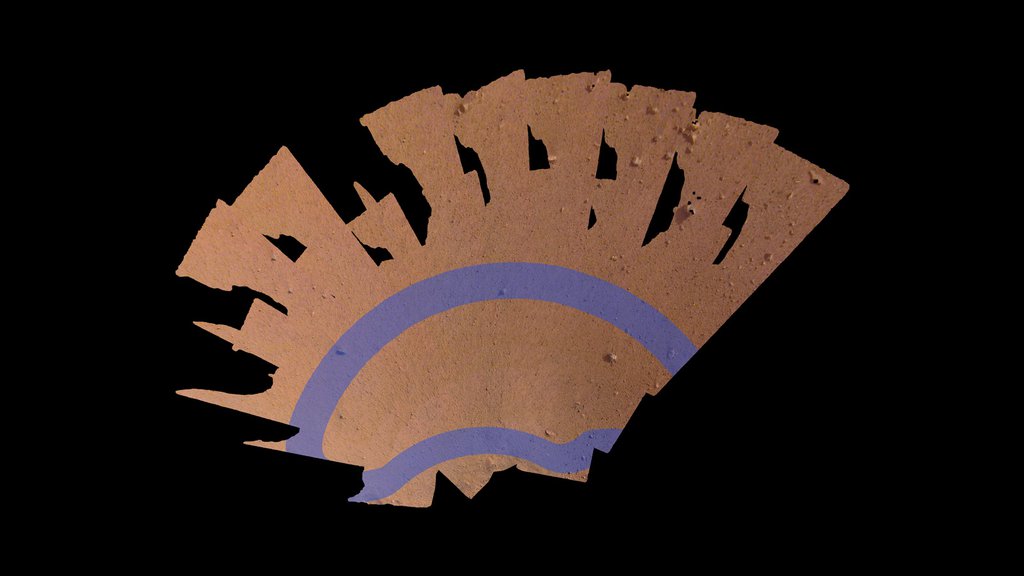 This mosaic, composed of 52 individual images from NASA's InSight lander, shows the workspace where the spacecraft will eventually set its science instruments.› Full image and caption
Credit: NASA/JPL-Caltech

Two new image mosaics detail the lander's deck and "workspace" - the surface where it will eventually set down its science instruments.

NASA's InSight lander isn't camera-shy. The spacecraft used a camera on its robotic arm to take its first selfie - a mosaic made up of 11 images. This is the same imaging process used by NASA's Curiosity rover mission, in which many overlapping pictures are taken and later stitched together. Visible in the selfie are the lander's solar panel and its entire deck, including its science instruments.

Mission team members have also received their first complete look at InSight's "workspace" - the approximately 14-by-7-foot (4-by-2-meter) crescent of terrain directly in front of the spacecraft. This image is also a mosaic composed of 52 individual photos.

In the coming weeks, scientists and engineers will go through the painstaking process of deciding where in this workspace the spacecraft's instruments should be placed. They will then command InSight's robotic arm to carefully set the seismometer (called the Seismic Experiment for Interior Structure, or SEIS) and heat-flow probe (known as the Heat Flow and Physical Properties Package, or HP3) in the chosen locations. Both work best on level ground, and engineers want to avoid setting them on rocks larger than about a half-inch (1.3 cm).

"The near-absence of rocks, hills and holes means it'll be extremely safe for our instruments," said InSight's Principal Investigator Bruce Banerdt of NASA's Jet Propulsion Laboratory in Pasadena, California. "This might seem like a pretty plain piece of ground if it weren't on Mars, but we're glad to see that."

InSight's landing team deliberately chose a landing region in Elysium Planitia that is relatively free of rocks. Even so, the landing spot turned out even better than they hoped. The spacecraft sits in what appears to be a nearly rock-free "hollow" - a depression created by a meteor impact that later filled with sand. That should make it easier for one of InSight's instruments, the heat-flow probe, to bore down to its goal of 16 feet (5 meters) below the surface.