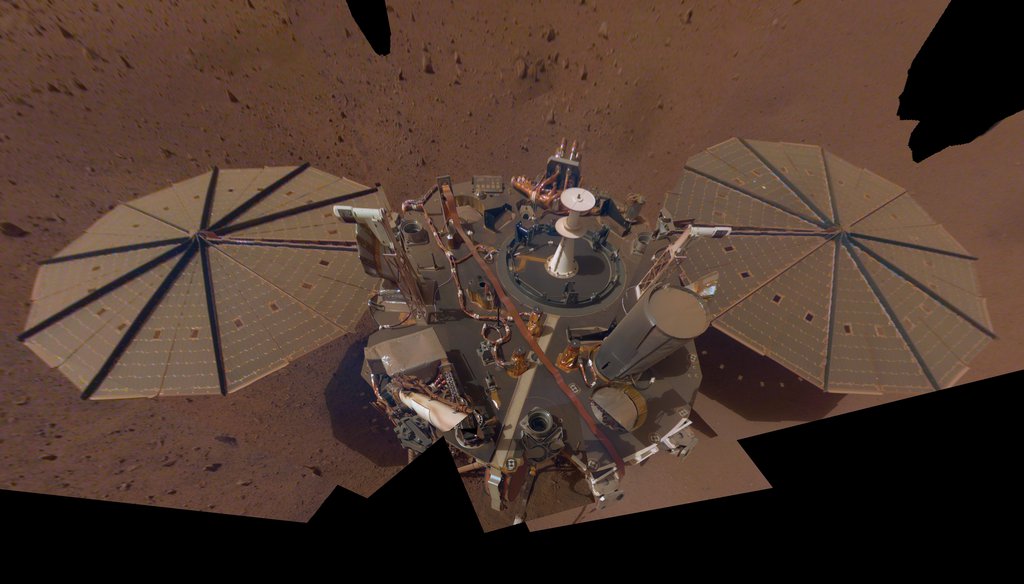 This selfie of NASA’s InSight lander is a mosaic made up of 14 images taken on March 15 and April 11, 2019 – the 106th and 133rd Martian days, or sols, of the mission – by InSight’s Instrument Deployment Camera, located on its robotic arm.

Several weeks after the end of a dust storm on Mars, the solar panels of NASA’s InSight lander are producing almost as much power as they did before the storm. That power level should enable the lander to continue science operations into the summer.

The team anticipates that continued dust accumulation will progressively diminish the spacecraft’s overall power budget in the months ahead and has been carefully conserving energy by turning on science instruments for limited periods of time. Having completed all primary mission science objectives, the goal now is to enable the spacecraft to operate through the end of its extended mission in December. A passing whirlwind that removes dust or a new dust storm that increases the dust accumulation could alter the timeline.

NASA’s InSight has exited safe mode and resumed normal operations, although its science instruments remain off. Skies appear to be clearing of dust above the spacecraft. Over the next two weeks, the mission team will assess the effects of dust accumulation on the lander’s power.

The lander has taken measures to conserve energy; engineers aim to return to normal operations next week.

NASA’s InSight lander is stable and sending health data from Mars to Earth after going into safe mode Friday, Jan. 7, following a large, regional dust storm that reduced the sunlight reaching its solar panels. In safe mode, a spacecraft suspends all but its essential functions.

The mission’s team reestablished contact with InSight Jan. 10, finding that its power was holding steady and, while low, was unlikely to be draining the lander’s batteries. Drained batteries are believed to have caused the end of NASA’s Opportunity rover during an epic series of dust storms that blanketed the Red Planet in 2018.

Even before this recent dust storm, dust had been accumulating on InSight’s solar panels, reducing the lander’s power supply. Using a scoop on the lander’s robotic arm, InSight’s team came up with an innovative way to reduce the dust on one panel, and gained several boosts of energy during 2021, but these activities become increasingly difficult as available energy decreases.

Dust storms can affect solar panels in two ways: Dust reduces sunlight filtering through the atmosphere, and it can also accumulate on the panels. Whether this storm will leave an additional layer of dust on the solar panels remains to be determined.

The current dust storm was first detected by the Mars Color Imager (MARCI) camera aboard NASA’s Mars Reconnaissance Orbiter, which creates daily color maps of the entire planet. Those maps allow scientists to monitor dust storms and can serve as an early warning system for spacecraft on the Martian surface. InSight’s team received data indicating the regional storm is waning.

The whirlwinds and gusts of dust storms have helped to clear solar panels over time, as with the Spirit and Opportunity Mars rover missions. While InSight’s weather sensors have detected many passing whirlwinds, none have cleared any dust.

InSight’s engineers are hopeful they will be able to command the lander to exit safe mode next week. This will allow more flexibility in operating the lander, as communication, which requires a relatively large amount of energy, is limited in safe mode to conserve battery charge.

InSight landed on Mars on Nov. 26, 2018, to study the inner structure of the planet, including its crust, mantle and core. The spacecraft achieved its science objectives before its prime mission ended a year ago. NASA then extended the mission for up to two years, to December 2022, based on the recommendation of an independent review panel composed of experts with backgrounds in science, operations and mission management.