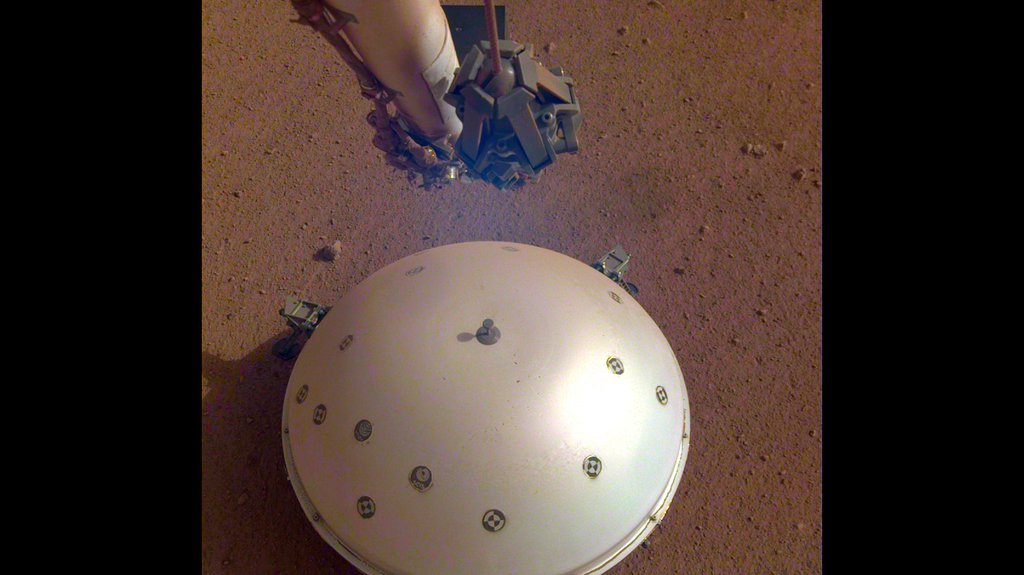 This image of InSight's seismometer was taken on the 110th Martian day, or sol, of the mission. The seismometer is called Seismic Experiment for Interior Structure, or SEIS.› Full image and caption
Credit: NASA/JPL-Caltech

While their causes are still unknown, one of three shaking events looks a lot like the quakes detected on the Moon by the Apollo missions.

NASA's Mars InSight lander has measured and recorded for the first time ever a likely "marsquake."

The faint seismic signal, detected by the lander's Seismic Experiment for Interior Structure (SEIS) instrument, was recorded on April 6, the lander's 128th Martian day, or sol. This is the first recorded trembling that appears to have come from inside the planet, as opposed to being caused by forces above the surface, such as wind. Scientists still are examining the data to determine the exact cause of the signal.

This video and audio illustrates a seismic event detected by NASA's InSight on April 6, 2019, the 128th Martian day, or sol, of the mission. Three distinct kinds of sounds can be heard, all of them detected as ground vibrations by the spacecraft's seismometer, called the Seismic Experiment for Interior Structure (SEIS): There's noise from Martian wind; the seismic event itself; and the spacecraft's robotic arm as it moves to take pictures.

The new seismic event was too small to provide solid data on the Martian interior, which is one of InSight's main objectives. The Martian surface is extremely quiet, allowing SEIS, InSight's specially designed seismometer, to pick up faint rumbles. In contrast, Earth's surface is quivering constantly from seismic noise created by oceans and weather. An event of this size in Southern California would be lost among dozens of tiny crackles that occur every day.

"The Martian Sol 128 event is exciting because its size and longer duration fit the profile of moonquakes detected on the lunar surface during the Apollo missions," said Lori Glaze, Planetary Science Division director at NASA Headquarters.

NASA's Apollo astronauts installed five seismometers that measured thousands of quakes while operating on the Moon between 1969 and 1977, revealing seismic activity on the Moon. Different materials can change the speed of seismic waves or reflect them, allowing scientists to use these waves to learn about the interior of the Moon and model its formation. NASA currently is planning to return astronauts to the Moon by 2024, laying the foundation that will eventually enable human exploration of Mars.

InSight's seismometer, which the lander placed on the planet's surface on Dec. 19, 2018, will enable scientists to gather similar data about Mars. By studying the deep interior of Mars, they hope to learn how other rocky worlds, including Earth and the Moon, formed.

Three other seismic signals occurred on March 14 (Sol 105), April 10 (Sol 132) and April 11 (Sol 133). Detected by SEIS' more sensitive Very Broad Band sensors, these signals were even smaller than the Sol 128 event and more ambiguous in origin. The team will continue to study these events to try to determine their cause.

Regardless of its cause, the Sol 128 signal is an exciting milestone for the team.

"We've been waiting months for a signal like this," said Philippe Lognonné, SEIS team lead at the Institut de Physique du Globe de Paris (IPGP) in France. "It's so exciting to finally have proof that Mars is still seismically active. We're looking forward to sharing detailed results once we've had a chance to analyze them."

Most people are familiar with quakes on Earth, which occur on faults created by the motion of tectonic plates. Mars and the Moon do not have tectonic plates, but they still experience quakes - in their cases, caused by a continual process of cooling and contraction that creates stress. This stress builds over time, until it is strong enough to break the crust, causing a quake.

Detecting these tiny quakes required a huge feat of engineering. On Earth, high-quality seismometers often are sealed in underground vaults to isolate them from changes in temperature and weather. InSight's instrument has several ingenious insulating barriers, including a cover built by JPL called the Wind and Thermal Shield, to protect it from the planet's extreme temperature changes and high winds.

SEIS has surpassed the team's expectations in terms of its sensitivity. The instrument was provided for InSight by the French space agency, Centre National d'Études Spatiales (CNES), while these first seismic events were identified by InSight's Marsquake Service team, led by the Swiss Federal Institute of Technology.

"We are delighted about this first achievement and are eager to make many similar measurements with SEIS in the years to come," said Charles Yana, SEIS mission operations manager at CNES.

A number of European partners, including CNES and the German Aerospace Center (DLR), support the InSight mission. CNES provided the SEIS instrument to NASA, with the principal investigator at IPGP. Significant contributions for SEIS came from IPGP; the Max Planck Institute for Solar System Research in Germany; the Swiss Federal Institute of Technology (ETH Zurich) in Switzerland; Imperial College London and Oxford University in the United Kingdom; and JPL. DLR provided the Heat Flow and Physical Properties Package (HP3) instrument, with significant contributions from the Space Research Center of the Polish Academy of Sciences and Astronika in Poland. Spain's Centro de Astrobiología supplied the temperature and wind sensors.

Listen to audio of this likely marsquake at:

For more information about the agency's Moon to Mars activities, visit