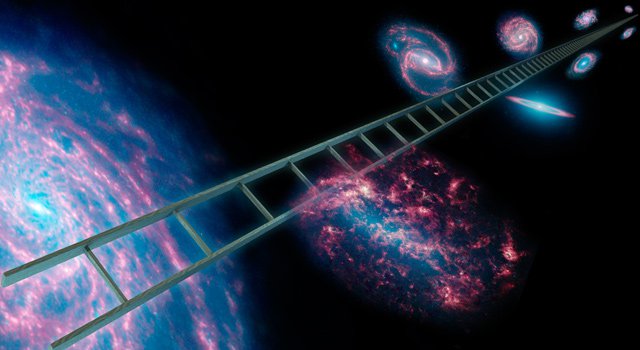 Astronomers using NASA's Spitzer Space Telescope have greatly improved the cosmic distance ladder used to measure the expansion rate of the universe, as well as its size and age. The cosmic distance ladder, symbolically shown here in this artist's concept, is a series of stars and other objects within galaxies that have known distances.› Full image and caption
Credit: NASA/JPL-Caltech 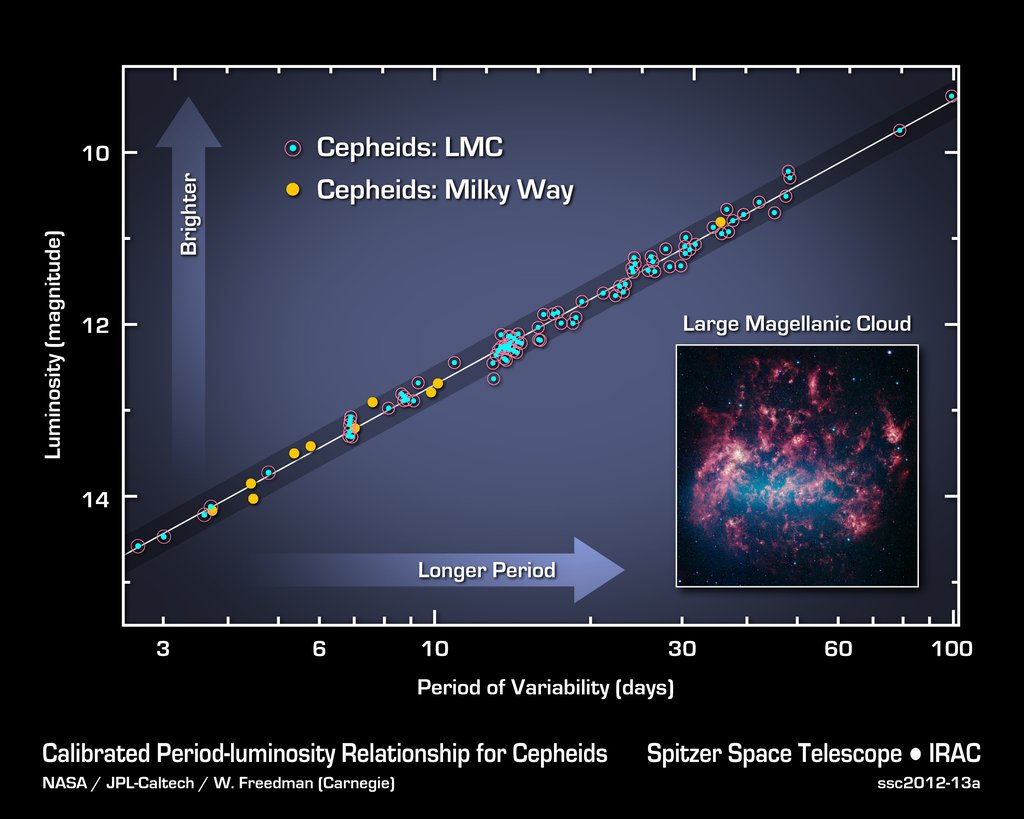 This graph illustrates the Cepheid period-luminosity relationship, which scientists use to calculate the size, age and expansion rate of the universe. The data shown are from NASA's Spitzer Space Telescope, which has made one of the most precise measurements yet of the universe's expansion rate by recalculating the distance to pulsating stars called Cepheids.› Full image and caption
Credit: NASA/JPL-Caltech/Carnegie

Astronomers using NASA's Spitzer Space Telescope have announced the most precise measurement yet of the Hubble constant, or the rate at which our universe is stretching apart.

Corrected Oct. 5, 2012 to include a similar result from another study

PASADENA, Calif. -- Astronomers using NASA's Spitzer Space Telescope have announced one of the most precise measurements yet of the Hubble constant, or the rate at which our universe is stretching apart.

The Hubble constant is named after the astronomer Edwin P. Hubble, who astonished the world in the 1920s by confirming our universe has been expanding since it exploded into being 13.7 billion years ago. In the late 1990s, astronomers discovered the expansion is accelerating, or speeding up, over time. Determining the expansion rate is critical for understanding the age and size of the universe.

Unlike NASA's Hubble Space Telescope that views the cosmos in visible and short-wavelength infrared light, Spitzer took advantage of long-wavelength infrared light for its latest Hubble constant measurement of 74.3 kilometers per second per megaparsec. A megaparsec is roughly three million light-years. This finding agrees with an independent supernovae study conducted last year by researchers primarily based at the Space Telescope Science Institute in Baltimore, Md., and improves by a factor of three on a seminal 2001 Hubble Space Telescope study using a similar technique as the current study.

"Spitzer is yet again doing science beyond what it was designed to do," said project scientist Michael Werner at NASA's Jet Propulsion Laboratory in Pasadena, Calif. Werner has worked on the mission since its early concept phase more than 30 years ago. "First, Spitzer surprised us with its pioneering ability to study exoplanet atmospheres," said Werner, "and now, in the mission's later years, it has become a valuable cosmology tool."

In addition, the findings were combined with published data from NASA's Wilkinson Microwave Anisotropy Probe to obtain an independent measurement of dark energy, one of the greatest mysteries of our cosmos. Dark energy is thought to be winning a battle against gravity, pulling the fabric of the universe apart. Research based on this acceleration garnered researchers the 2011 Nobel Prize in physics.

"This is a huge puzzle," said the lead author of the new study, Wendy Freedman of the Observatories of the Carnegie Institution for Science in Pasadena. "It's exciting that we were able to use Spitzer to tackle fundamental problems in cosmology: the precise rate at which the universe is expanding at the current time, as well as measuring the amount of dark energy in the universe from another angle." Freedman led the groundbreaking Hubble Space Telescope study that earlier had measured the Hubble constant.

"These pulsating stars are vital rungs in what astronomers call the cosmic distance ladder: a set of objects with known distances that, when combined with the speeds at which the objects are moving away from us, reveal the expansion rate of the universe," said Wahlgren.

Cepheids are crucial to the calculations because their distances from Earth can be measured readily. In 1908, Henrietta Leavitt discovered these stars pulse at a rate directly related to their intrinsic brightness.

To visualize why this is important, imagine someone walking away from you while carrying a candle. The farther the candle traveled, the more it would dim. Its apparent brightness would reveal the distance. The same principle applies to cepheids, standard candles in our cosmos. By measuring how bright they appear on the sky, and comparing this to their known brightness as if they were close up, astronomers can calculate their distance from Earth.

Spitzer observed 10 cepheids in our own Milky Way galaxy and 80 in a nearby neighboring galaxy called the Large Magellanic Cloud. Without the cosmic dust blocking their view, the Spitzer research team was able to obtain more precise measurements of the stars' apparent brightness, and thus their distances. These data opened the way for a new and improved estimate of our universe's expansion rate.

"Just over a decade ago, using the words 'precision' and 'cosmology' in the same sentence was not possible, and the size and age of the universe was not known to better than a factor of two," said Freedman. "Now we are talking about accuracies of a few percent. It is quite extraordinary."