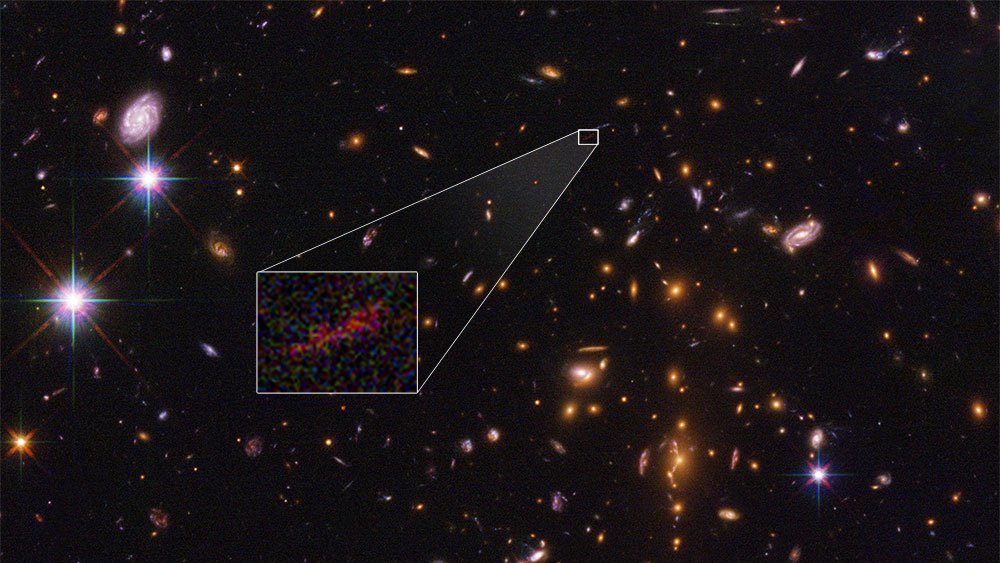 This Hubble Space Telescope image shows the farthest galaxy yet seen in an image that has been stretched and amplified by a phenomenon called gravitational lensing. Credits: NASA , ESA, and B. Salmon (STScI) › Full image and caption

An intensive survey by NASA's Hubble and Spitzer space telescopes has yielded the farthest galaxy yet seen in an image stretched and amplified by gravitational lensing.

An intensive survey deep into the universe by NASA's Hubble and Spitzer space telescopes has yielded the proverbial needle-in-a-haystack: the farthest galaxy yet seen in an image that has been stretched and amplified by a phenomenon called gravitational lensing.

The embryonic galaxy named SPT0615-JD existed when the universe was just 500 million years old. Though a few other primitive galaxies have been seen at this early epoch, they have essentially all looked like red dots, given their small size and tremendous distances. However, in this case, the gravitational field of a massive foreground galaxy cluster not only amplified the light from the background galaxy but also smeared the image of it into an arc (about 2 arcseconds long).

"No other candidate galaxy has been found at such a great distance that also gives you the spatial information that this arc image does. By analyzing the effects of gravitational lensing on the image of this galaxy, we can determine its actual size and shape," said the study's lead author, Brett Salmon of the Space Telescope Science Institute in Baltimore. He is presenting his research at the 231st meeting of the American Astronomical Society in Washington.

First predicted by Albert Einstein a century ago, the warping of space by the gravity of a massive foreground object can brighten and distort the images of far more distant background objects. Astronomers use this "zoom lens" effect to go hunting for amplified images of distant galaxies that otherwise would not be visible with today's telescopes.

SPT0615-JD was identified in Hubble's Reionization Lensing Cluster Survey (RELICS) and companion S-RELICS Spitzer program. "RELICS was designed to discover distant galaxies like these that are magnified brightly enough for detailed study," said Dan Coe, principal investigator of RELICS. RELICS observed 41 massive galaxy clusters for the first time in infrared with Hubble to search for such distant lensed galaxies. One of these clusters was SPT-CL J0615-5746, which Salmon analyzed to make this discovery. Upon finding the lens-arc, Salmon thought, "Oh, wow! I think we're on to something!"

By combining the Hubble and Spitzer data, Salmon calculated the lookback time to the galaxy of 13.3 billion years. Preliminary analysis suggests the diminutive galaxy weighs in at no more than 3 billion solar masses (roughly 1/100th the mass of our fully grown Milky Way galaxy). It is less than 2,500 light-years across, half the size of the Small Magellanic Cloud, a satellite galaxy of our Milky Way. The object is considered prototypical of young galaxies that emerged during the epoch shortly after the big bang.

The galaxy is right at the limits of Hubble's detection capabilities, but just the beginning for the upcoming NASA James Webb Space Telescope's powerful capabilities, said Salmon. "This galaxy is an exciting target for science with the Webb telescope as it offers the unique opportunity for resolving stellar populations in the very early universe." Spectroscopy with Webb will allow for astronomers to study in detail the firestorm of starbirth activity taking place at this early epoch, and resolve its substructure.