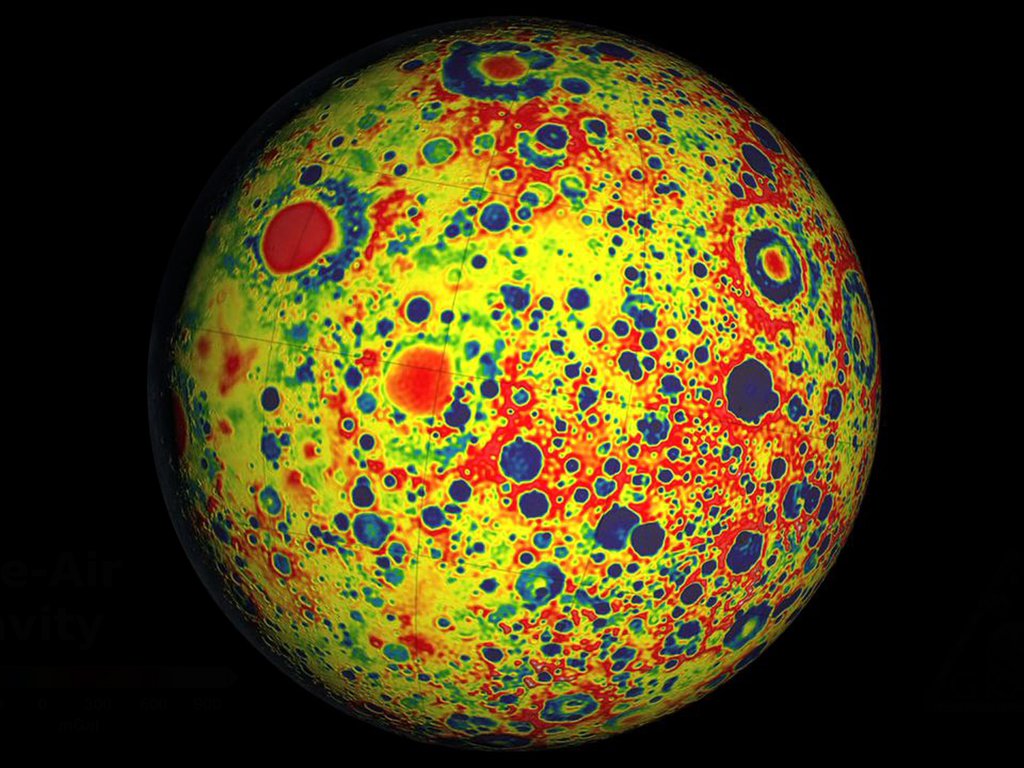 This movie shows the variations in the lunar gravity field as measured by NASA's Gravity Recovery and Interior Laboratory (GRAIL) during the primary mapping mission from March to May 2012. Very precise microwave measurements between two spacecraft, named Ebb and Flow, were used to map gravity with high precision and high spatial resolution.› Play video
Credit: NASA/JPL-Caltech/MIT/GSFC 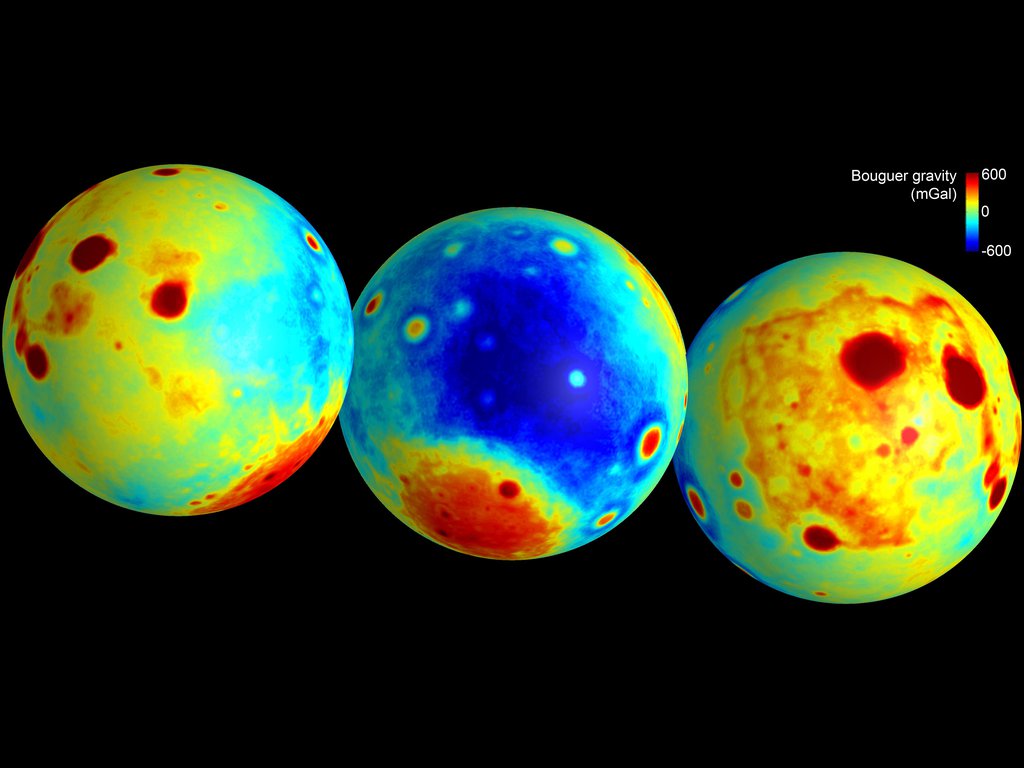 These maps of the moon show the "Bouguer" gravity anomalies as measured by NASA's GRAIL mission.› Full image and caption
Credit: NASA/JPL-Caltech/CSM 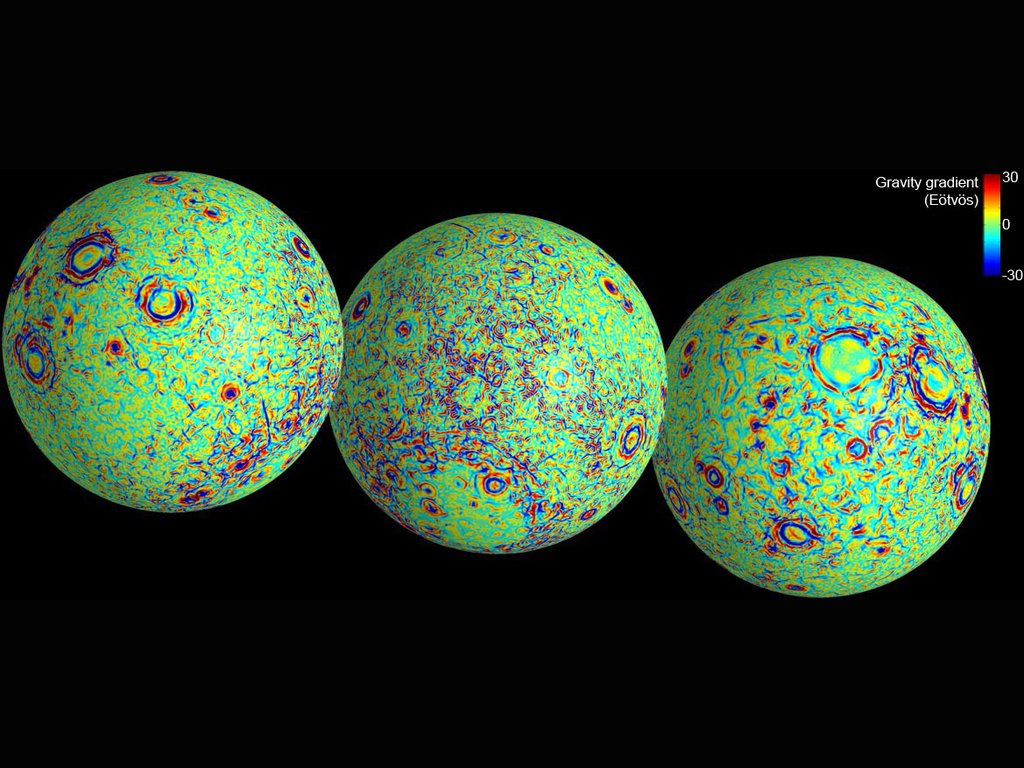 These maps of the near and far side of the moon show gravity gradients as measured by NASA's GRAIL mission.› Full image and caption
Credit: NASA/JPL-Caltech/CSM 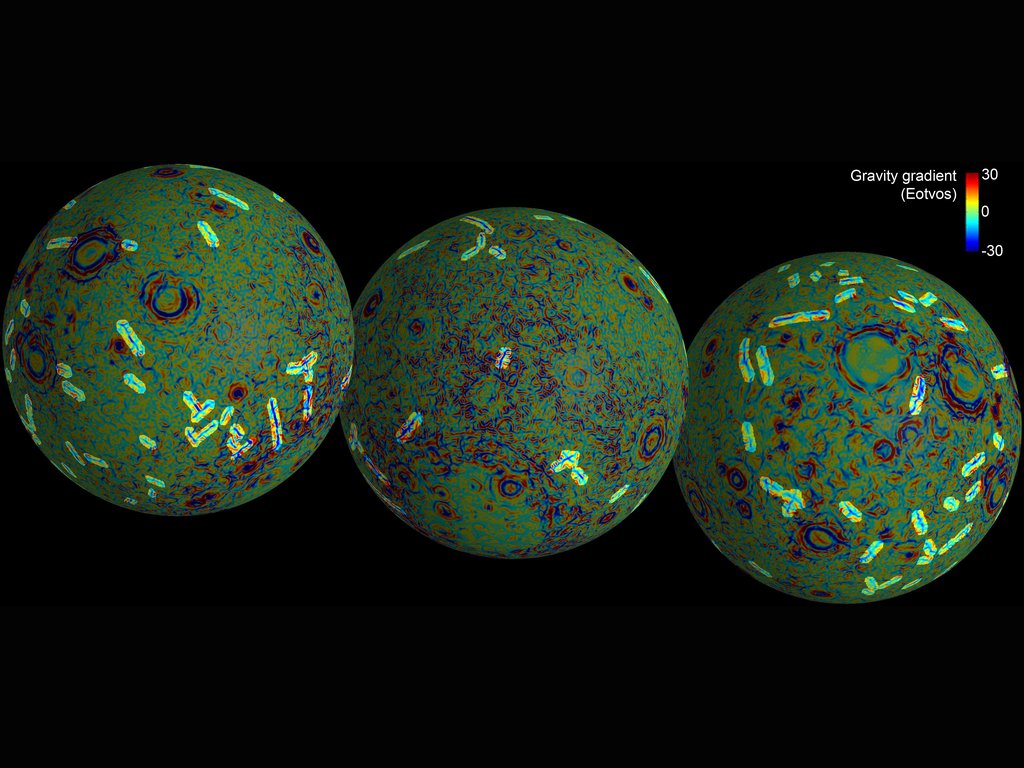 These maps of the near and far side of the moon show the gravity gradients as measured by NASA's GRAIL mission, highlighting a population of linear gravity anomalies.› Full image and caption
Credit: NASA/JPL-Caltech/CSM 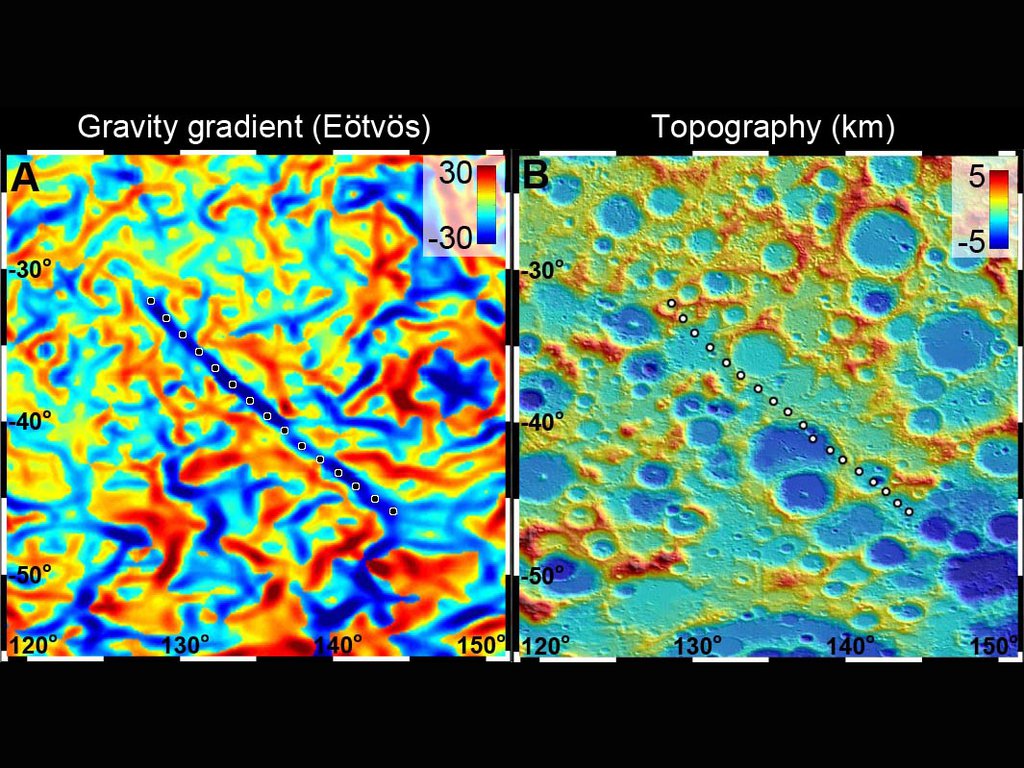 A 300-mile-long (500 kilometer-long) linear gravity anomaly on the far side of the moon has been revealed by gravity gradients measured by NASA's GRAIL mission.› Full image and caption
Credit: NASA/JPL-Caltech/CSM 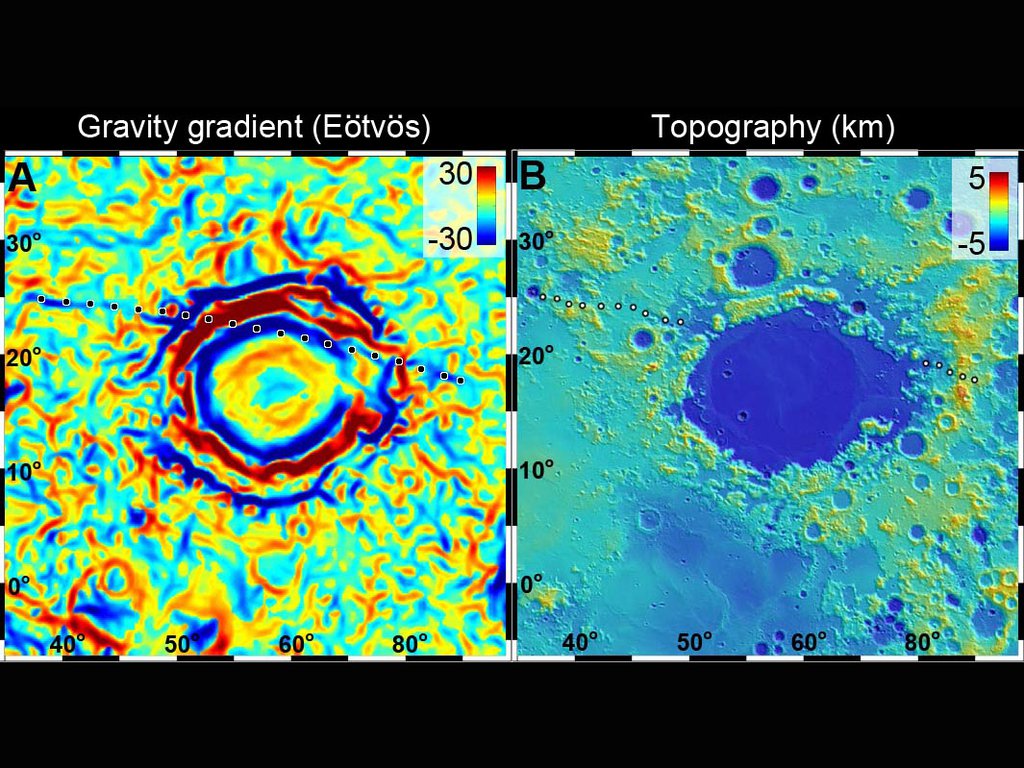 A linear gravity anomaly intersecting the Crisium basin on the nearside of the moon has been revealed by NASA's GRAIL mission.› Full image and caption
Credit: NASA/JPL-Caltech/CSM

The new map, created by the Gravity Recovery and Interior Laboratory (GRAIL) mission, is allowing scientists to learn about the moon's internal structure and composition in unprecedented detail. Data from the two washing machine-sized spacecraft also will provide a better understanding of how Earth and other rocky planets in the solar system formed and evolved.

The gravity field map reveals an abundance of features never before seen in detail, such as tectonic structures, volcanic landforms, basin rings, crater central peaks and numerous simple, bowl-shaped craters. Data also show the moon's gravity field is unlike that of any terrestrial planet in our solar system.

These are the first scientific results from the prime phase of the mission, and they are published in three papers in the journal Science.

"What this map tells us is that more than any other celestial body we know of, the moon wears its gravity field on its sleeve," said GRAIL Principal Investigator Maria Zuber of the Massachusetts Institute of Technology in Cambridge. "When we see a notable change in the gravity field, we can sync up this change with surface topography features such as craters, rilles or mountains."

According to Zuber, the moon's gravity field preserves the record of impact bombardment that characterized all terrestrial planetary bodies and reveals evidence for fracturing of the interior extending to the deep crust and possibly the mantle. This impact record is preserved, and now precisely measured, on the moon.

The probes revealed the bulk density of the moon's highland crust is substantially lower than generally assumed. This low-bulk crustal density agrees well with data obtained during the final Apollo lunar missions in the early 1970s, indicating that local samples returned by astronauts are indicative of global processes.

"With our new crustal bulk density determination, we find that the average thickness of the moon's crust is between 21 and 27 miles (34 and 43 kilometers), which is about 6 to 12 miles (10 to 20 kilometers) thinner than previously thought," said Mark Wieczorek, GRAIL co-investigator at the Institut de Physique du Globe de Paris. "With this crustal thickness, the bulk composition of the moon is similar to that of Earth. This supports models where the moon is derived from Earth materials that were ejected during a giant impact event early in solar system history."

"We used gradients of the gravity field in order to highlight smaller and narrower structures than could be seen in previous datasets," said Jeff Andrews-Hanna, a GRAIL guest scientist with the Colorado School of Mines in Golden. "This data revealed a population of long, linear gravity anomalies, with lengths of hundreds of kilometers, crisscrossing the surface. These linear gravity anomalies indicate the presence of dikes, or long, thin, vertical bodies of solidified magma in the subsurface. The dikes are among the oldest features on the moon, and understanding them will tell us about its early history."

While results from the primary science mission are just beginning to be released, the collection of gravity science by the lunar twins continues. GRAIL's extended mission science phase began Aug. 30 and will conclude Dec. 17. As the end of mission nears, the spacecraft will operate at lower orbital altitudes above the moon.

When launched in September 2011, the probes were named GRAIL A and B. They were renamed Ebb and Flow in January by elementary students in Bozeman, Mont., in a nationwide contest. Ebb and Flow were placed in a near-polar, near-circular orbit at an altitude of approximately 34 miles (55 kilometers) on Dec. 31, 2011, and Jan. 1, 2012, respectively.

To view the lunar gravity map, visit http://bit.ly/grailtour . For more information about the mission, visit: http://www.nasa.gov/grail .