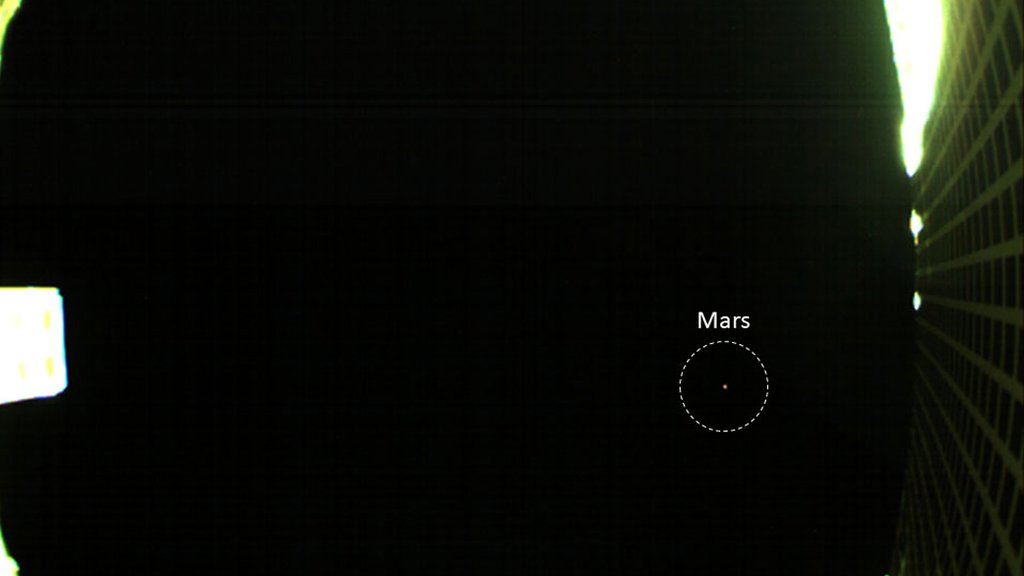 One of NASA's twin MarCO spacecraft took this image of Mars on October 2 -- the first time a CubeSat, a kind of low-cost, briefcase-sized spacecraft -- has done so.
Credit: NASA/JPL-Caltech 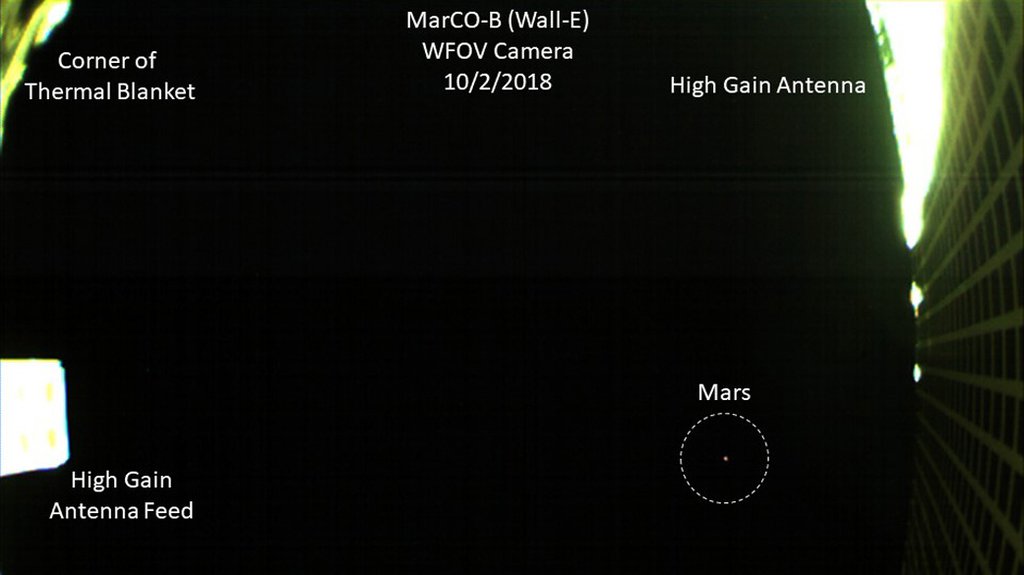 One of NASA's twin MarCO spacecraft took this image(annotated) of Mars on October 2 -- the first time a CubeSat, a kind of low-cost, briefcase-sized spacecraft -- has done so.
Credit: NASA/JPL-Caltech

The image was produced by one of the twin briefcase-sized MarCO spacecraft, the first CubeSats to fly to deep space.

NASA's MarCO mission was designed to find out if briefcase-sized spacecraft called CubeSats could survive the journey to deep space. Now, MarCO - which stands for Mars Cube One - has Mars in sight.

One of the twin MarCO CubeSats snapped this image of Mars on Oct. 3 - the first image of the Red Planet ever produced by this class of tiny, low-cost spacecraft. The two CubeSats are officially called MarCO-A and MarCO-B but nicknamed "EVE" and "Wall-E" by their engineering team.

A wide-angle camera on top of MarCO-B produced the image as a test of exposure settings. The MarCO mission, led by NASA's Jet Propulsion Laboratory in Pasadena, California, hopes to produce more images as the CubeSats approach Mars ahead of Nov. 26. That's when they'll demonstrate their communications capabilities while NASA's InSight spacecraft attempts to land on the Red Planet. (The InSight mission won't rely on them, however; NASA's Mars orbiters will be relaying the spacecraft's data back to Earth.)

MarCO-B's wide-angle camera looks straight out from the deck of the CubeSat. Parts related to the spacecraft's high-gain antenna are visible on either side of the image. Mars appears as a small red dot at the right of the image.

To take the image, the MarCO team had to program the CubeSat to rotate in space so that the deck of its boxy "body" was pointing at Mars. After several test images, they were excited to see that clear, red pinprick.

"We've been waiting six months to get to Mars," said Cody Colley, MarCO's mission manager at JPL. "The cruise phase of the mission is always difficult, so you take all the small wins when they come. Finally seeing the planet is definitely a big win for the team."