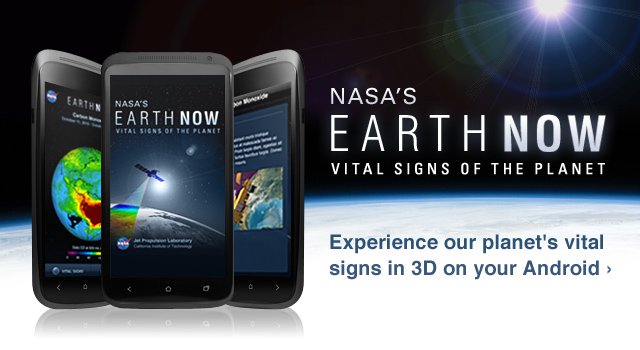 One of the top iPhone education apps in the iTunes store is now available for Android.

Available at http://www.jpl.nasa.gov/apps , Earth Now displays data on many of the key vital signs of our planet that NASA satellites track. The data, displayed on your smart phone in 3-D, include current surface temperature, carbon dioxide levels and global sea level.

The regularly updated data are displayed as color maps projected over a 3-D Earth model that can be rotated by a single finger stroke, or zoomed in and out by the pinch or spread of two fingers. Color-coded legends indicate the relative strength or weakness of environmental conditions. Descriptions provide background information on each data set.

Earth Now is closely integrated with NASA's Webby Award-winning Global Climate Change website, http://climate.nasa.gov , which is devoted to educating the public about Earth's changing climate, providing easy-to-understand information about the causes and effects of climate change, and information about how NASA studies it. The app was developed by JPL's Earth Science Communications and Visualization Technology Applications and Development Teams, with support from NASA Headquarters.