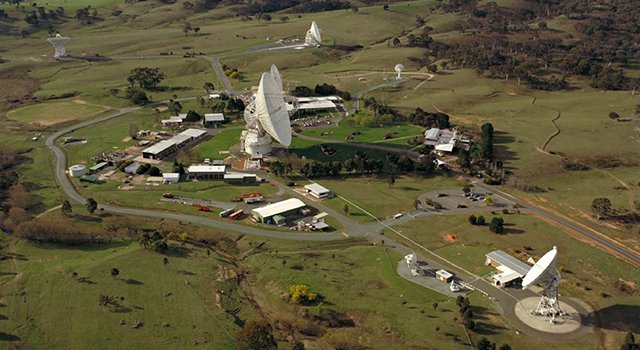 This aerial photo shows the NASA Deep Space Network complex outside of Canberra, Australia in 1997. The Canberra complex officially opened in 1965. Because of celestial mechanics and trajectories, the best spacecraft tracking requires stations located in both the northern and southern hemispheres.› Larger view
Credit: NASA/JPL-Caltech 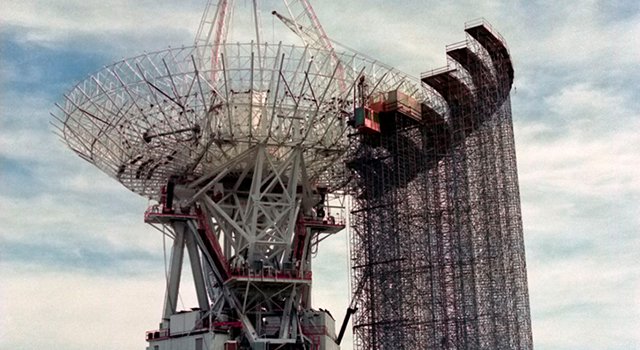 In anticipation of the upcoming flyby of Neptune by NASA's Voyager 2 spacecraft in 1989, NASA's Deep Space Network upgraded the giant antenna at the Goldstone complex known as DSS-14. This antenna was expanded from 210 feet (64 meters) across to 230 feet (70 meters) across in order to pick up Voyager's faraway signal with more accuracy. This image was taken on Dec. 12, 1987.
Credit: NASA/JPL-Caltech

During its first year of operation, the network communicated with three spacecraft - Mariner 2, IMP-A and Atlas Centaur 2. Today, it communicates with 33 via three antenna complexes in Goldstone, Calif.; near Madrid, Spain; and near Canberra, Australia, maintaining round-the-clock coverage of the solar system.

During the past 50 years, antennas of the Deep Space Network have communicated with most of the missions that have gone to the moon and far into deep space. The highlights include relaying the moment when astronaut Neil Armstrong stepped onto the surface of the moon in a "giant leap for mankind"; transmitting data from numerous encounters with the outer planets of our solar system; communicating images taken by rovers exploring Mars; and relaying the data confirming that NASA's Voyager 1 spacecraft had entered interstellar space.

Space agencies in Europe, Japan and Russia have also relied on the Deep Space Network when planning and communicating with their own missions over the decades. The Deep Space Network has been used recently by India's first interplanetary probe, the Mars Orbiter Mission.