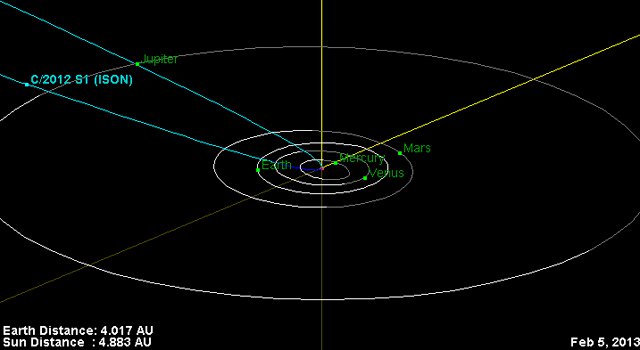 This is the orbital trajectory of comet C/2012 S1 (ISON). The comet is currently located just inside the orbit of Jupiter. In November 2013, ISON will pass less than 1.1 million miles (1.8 million kilometers) from the sun's surface. The fierce heating it experiences during this close approach to the sun could turn the comet into a bright naked-eye object
Credit: NASA/JPL-Caltech

PASADENA, Calif. - NASA's Deep Impact spacecraft has acquired its first images of comet C/2012 S1 (ISON). The images were taken by the spacecraft's Medium-Resolution Imager over a 36-hour period on Jan. 17 and 18, 2013, from a distance of 493 million miles (793 million kilometers). Many scientists anticipate a bright future for comet ISON; the spaceborne conglomeration of dust and ice may put on quite a show as it passes through the inner solar system this fall.

"This is the fourth comet on which we have performed science observations and the farthest point from Earth from which we've tried to transmit data on a comet," said Tim Larson, project manager for the Deep Impact spacecraft at NASA's Jet Propulsion Laboratory in Pasadena, Calif. "The distance limits our bandwidth, so it's a little like communicating through a modem after being used to DSL. But we're going to coordinate our science collection and playback so we maximize our return on this potentially spectacular comet."

Deep Impact has executed close flybys of two comets - Tempel 1 and Hartley 2 - and its mission scientists, led by University of Maryland Astronomer Michael A'Hearn, have performed scientific observations on two more - comet Garradd and now ISON. The ISON imaging campaign is expected to yield infrared data, and light curves (which are used in defining the comet's rotation rate) in addition to visible-light images. A movie of comet ISON was generated from initial data acquired during this campaign. Preliminary results indicate that although the comet is still in the outer solar system, more than 474 million miles (763 million kilometers) from the sun, it is already active. As of Jan. 18, the tail extending from ISON's nucleus was already more than 40,000 miles (64,400 kilometers) long.

Long-period comets like ISON are thought to arrive from the solar system's Oort cloud, a giant spherical cloud of icy bodies surrounding our solar system so far away its outer edge is about a third of the way to the nearest star (other than our sun). Every once in a while, one of these loose conglomerations of ice, rock, dust and organic compounds is disturbed out of its established orbit in the Oort cloud by a passing star or the combined gravitational effects of the stars in the Milky Way galaxy. With these gravitational nudges, so begins a comet's eons-long, arching plunge toward the inner solar system.

ISON was discovered on Sept. 21, 2012, by two Russian astronomers using the International Scientific Optical Network's 16-inch (40-centimeter) telescope near Kislovodsk. NASA's Near-Earth Object Program Office, based at JPL, has plotted its orbit and determined that the comet is more than likely making it first-ever sweep through the inner solar system. Having not come this way before means the comet's pristine surface has a higher probability of being laden with volatile material just spoiling for some of the sun's energy to heat it up and help it escape. With the exodus of these clean ices could come a boatload of dust, held in check since the beginnings of our solar system. This released gas and dust is what is seen on Earth as comprising a comet's atmosphere (coma) and tail.

ISON will not be a threat to Earth - getting no closer to Earth than about 40 million miles on Dec. 26, 2013. But stargazers will have an opportunity to view the comet's head and tail before and after its closest approach to the sun -- if the comet doesn't fade early or break up before reaching the sun.

To date, Deep Impact has traveled about 4.39 billion miles (7.06 billion kilometers) in space.

JPL, a division of the California Institute of Technology in Pasadena, manages the Deep Impact mission for NASA's Science Mission Directorate, Washington. The University of Maryland is the Principal Investigator institution for the mission. Deep Impact is part of the Discovery Program managed at NASA's Marshall Space Flight Center in Huntsville, Ala. The spacecraft was built for NASA by Ball Aerospace & Technologies Corp., Boulder, Colo.