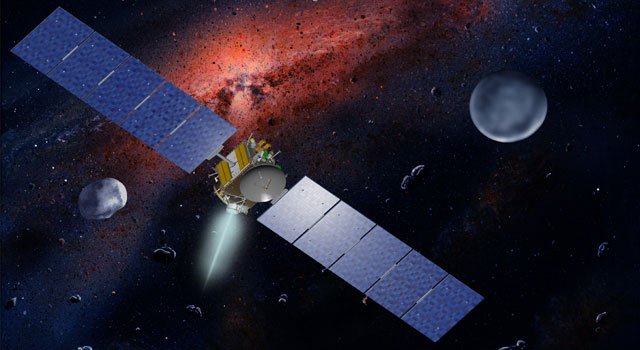 NASA's ion-propelled Dawn spacecraft has eclipsed the record for velocity change produced by a spacecraft's engines.

PASADENA, Calif.-- Deep in the heart of the asteroid belt, on its way to the first of the belt's two most massive inhabitants, NASA's ion-propelled Dawn spacecraft has eclipsed the record for velocity change produced by a spacecraft's engines.

The previous standard-bearer for velocity change, NASA's Deep Space 1, also impelled by ion propulsion, was the first interplanetary spacecraft to use this technology. The Deep Space 1 record fell on Saturday, June 5, when the Dawn spacecraft's accumulated acceleration over the mission exceeded 4.3 kilometers per second (9,600 miles per hour).

"We are using this amazing ion-engine technology as a stepping-stone to orbit and explore two of the asteroid belt's most mysterious objects, Vesta and Ceres," said Robert Mase, Dawn project manager from NASA's Jet Propulsion Laboratory in Pasadena, Calif.

A spacecraft's change in velocity refers to its ability to change its path through space by using its own rocket engines. This measurement of change begins only after the spacecraft exits the last stage of the launch vehicle that hurled it into space.

To get to where it is in both the record books and the asteroid belt, the Dawn spacecraft had to fire its three engines - one at a time-- for a cumulative total of 620 days. In that time, it has used less than 165 kilograms (363 pounds) of xenon propellant. Over the course of its eight-plus-year mission, Dawn's three ion engines are expected to accumulate 2,000 days of operation -- 5.5 years of thrusting -- for a total change in velocity of more than 38,620 kilometers per hour (24,000 miles per hour).

"I am delighted that it will be Dawn that surpasses DS1's record," said Marc Rayman, chief engineer for the Dawn mission and a previous project manager for Deep Space 1."It is a tribute to all those involved in the design and operations of this remarkable spacecraft."

At first glance, Dawn's pedal-to-the-metal performance is a not-so-inspiring 0-to-97 kilometers per hour (0-to-60 miles per hour) in four days. But due to its incredible efficiency, it expends only 37 ounces of xenon propellant during that time. Then take into consideration that after those four days of full-throttle thrusting, it will do another four days, and then another four. By the end of 12 days, the spacecraft will have increased its velocity by more than 290 kilometers per hour (180 miles per hour), with more days and weeks and months of continuous thrusting to come. In one year's time, Dawn's ion propulsion system can increase the spacecraft's speed by 8,850 kilometers per hour (5,500 miles per hour), while consuming the equivalent of only 16 gallons of fuel.

"This is a special moment for the spacecraft team," said Dawn's principal investigator, Chris Russell of the University of California Los Angeles. "In only 407 days, our minds will be on another set of records, the data records that Dawn will transmit when we enter Vesta orbit."

Dawn's 4.8-billion-kilometer (3-billion-mile) odyssey includes exploration of asteroid Vesta in 2011 and 2012, and the dwarf planet Ceres in 2015. These two icons of the asteroid belt have been witness to much of our solar system's history. By using the same set of instruments at two separate destinations, scientists can more accurately formulate comparisons and contrasts. Dawn's science instrument suite will measure shape, surface topography and tectonic history, elemental and mineral composition, as well as seek out water-bearing minerals. In addition, the way the Dawn spacecraft orbits both Vesta and Ceres will be used to measure the celestial bodies' masses and gravity fields.

While Dawn surpassed Deep Space 1's record for velocity change, Deep Space 1 will continue to reign as holder for the longest duration of powered spaceflight for another few months. Dawn is expected to take over that record on about August 10 of this year.

To learn more about Dawn and its mission to the asteroid belt, visit: