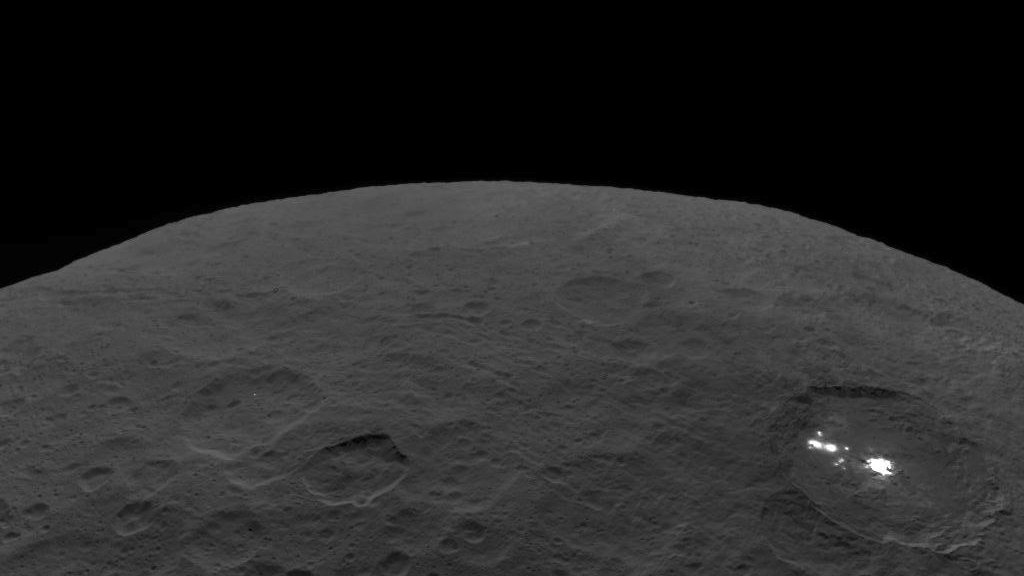 This photo of Ceres and the bright regions of Occator Crater was one of the last views NASA's Dawn spacecraft transmitted before it completed its mission. This view, which faces south, was captured on Sept. 1 at an altitude of 2,340 miles (3,370 kilometers) as the spacecraft was ascending in its elliptical orbit.› Full image and caption
Credit: NASA/JPL-Caltech/UCLA/MPS/DLR/IDA 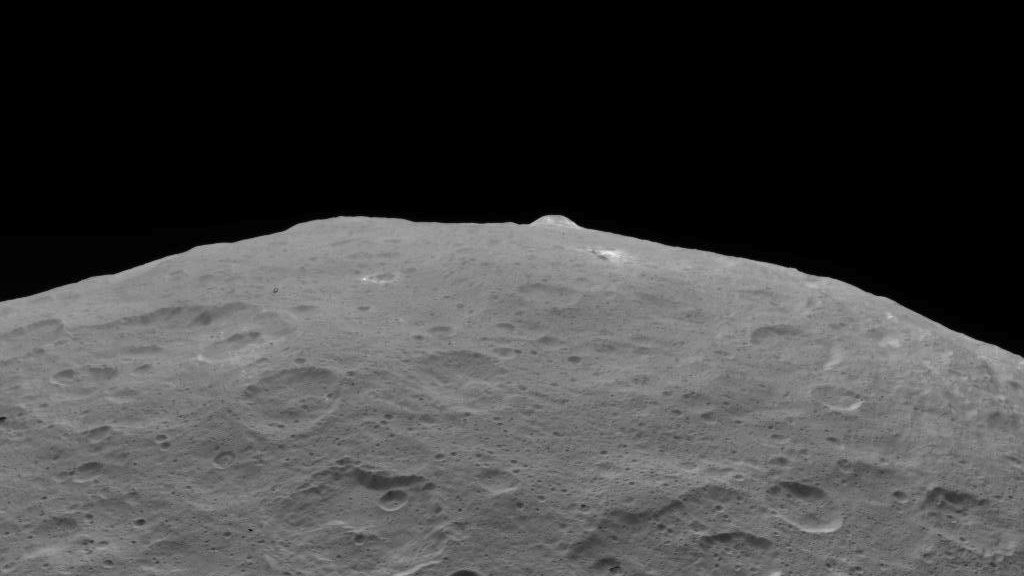 This photo of Ceres and one of its key landmarks, Ahuna Mons, was one of the last views Dawn transmitted before it completed its mission. This view, which faces south, was captured on Sept. 1 at an altitude of 2220 miles (3570 kilometers) as the spacecraft was ascending in its elliptical orbit.› Full image and caption
Credit: NASA/JPL-Caltech/UCLA/MPS/DLR/IDA

NASA declares Dawn's historic mission over after spacecraft depletes its hydrazine fuel and stops communicating with the Deep Space Network.

Dawn missed scheduled communications sessions with NASA's Deep Space Network on Wednesday, Oct. 31, and Thursday, Nov. 1. After the flight team eliminated other possible causes for the missed communications, mission managers concluded that the spacecraft finally ran out of hydrazine, the fuel that enables the spacecraft to control its pointing. Dawn can no longer keep its antennae trained on Earth to communicate with mission control or turn its solar panels to the Sun to recharge.

NASA's Dawn spacecraft turned science fiction into science fact by using ion propulsion to explore the two largest bodies in the main asteroid belt, Vesta and Ceres. The mission will end this fall, when the spacecraft runs out of hydrazine, which keeps it oriented and in communication with Earth.

The Dawn spacecraft launched 11 years ago to visit the two largest objects in the main asteroid belt. Currently, it's in orbit around the dwarf planet Ceres, where it will remain for decades.

"Today, we celebrate the end of our Dawn mission - its incredible technical achievements, the vital science it gave us, and the entire team who enabled the spacecraft to make these discoveries," said Thomas Zurbuchen, associate administrator of NASA's Science Mission Directorate in Washington. "The astounding images and data that Dawn collected from Vesta and Ceres are critical to understanding the history and evolution of our solar system."

Dawn launched in 2007 on a journey that put about 4.3 billion miles (6.9 billion kilometers) on its odometer. Propelled by ion engines, the spacecraft achieved many firsts along the way. In 2011, when Dawn arrived at Vesta, the second largest world in the main asteroid belt, the spacecraft became the first to orbit a body in the region between Mars and Jupiter. In 2015, when Dawn went into orbit around Ceres, a dwarf planet that is also the largest world in the asteroid belt, the mission became the first to visit a dwarf planet and go into orbit around two destinations beyond Earth.

"The fact that my car's license plate frame proclaims, 'My other vehicle is in the main asteroid belt,' shows how much pride I take in Dawn," said Mission Director and Chief Engineer Marc Rayman at NASA's Jet Propulsion Laboratory. "The demands we put on Dawn were tremendous, but it met the challenge every time. It's hard to say goodbye to this amazing spaceship, but it's time."

The data Dawn beamed back to Earth from its four science experiments enabled scientists to compare two planet-like worlds that evolved very differently. Among its accomplishments, Dawn showed how important location was to the way objects in the early solar system formed and evolved. Dawn also reinforced the idea that dwarf planets could have hosted oceans over a significant part of their history - and potentially still do.

"In many ways, Dawn's legacy is just beginning," said Principal Investigator Carol Raymond at JPL. "Dawn's data sets will be deeply mined by scientists working on how planets grow and differentiate, and when and where life could have formed in our solar system. Ceres and Vesta are important to the study of distant planetary systems, too, as they provide a glimpse of the conditions that may exist around young stars."

Because Ceres has conditions of interest to scientists who study chemistry that leads to the development of life, NASA follows strict planetary protection protocols for the disposal of the Dawn spacecraft. Dawn will remain in orbit for at least 20 years, and engineers have more than 99 percent confidence the orbit will last for at least 50 years.

So, while the mission plan doesn't provide the closure of a final, fiery plunge - the way NASA's Cassini spacecraft ended last year, for example - at least this is certain: Dawn spent every last drop of hydrazine making science observations of Ceres and radioing them back so we could learn more about the solar system we call home.

The Dawn media toolkit, with a mission timeline, images, video and quick facts, is available here:

More information about Dawn is available at: