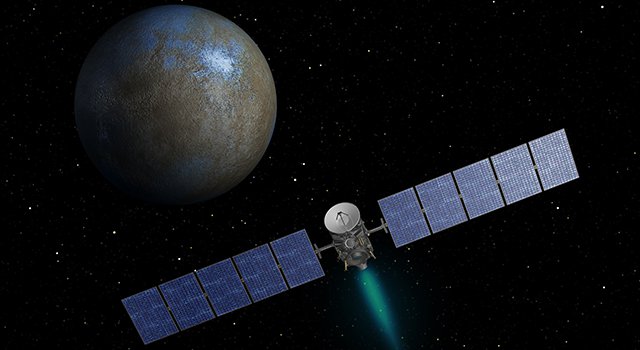 This artist's concept shows NASA's Dawn spacecraft heading toward the dwarf planet Ceres. Dawn spent nearly 14 months orbiting Vesta, the second most massive object in the main asteroid belt between Mars and Jupiter, from 2011 to 2012. It is heading towards Ceres, the largest member of the asteroid belt. When Dawn arrives, it will be the first spacecraft to go into orbit around two destinations in our solar system beyond Earth.› Full image and caption
Credit: NASA/JPL-Caltech 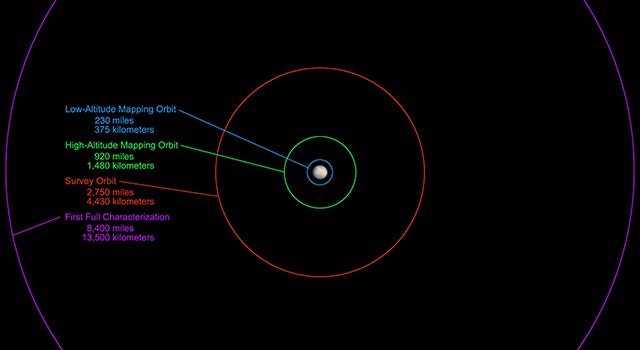 NASA's Dawn spacecraft will be getting an up-close look at the dwarf planet Ceres starting in late March or the beginning of April 2015. This graphic shows the science-gathering orbits planned for the spacecraft, with the altitudes above the surface noted for each of the orbits.› Full image and caption
Credit: NASA/JPL-Caltech 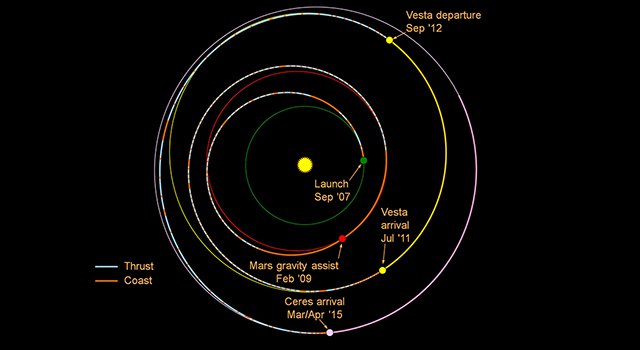 This graphic shows the planned trek of NASA's Dawn spacecraft from its launch in 2007 through its arrival at the dwarf planet Ceres in early 2015. When it gets into orbit around Ceres, Dawn will be the first spacecraft to go into orbit around two destinations in our solar system beyond Earth. Its journey involved a gravity assist at Mars and a nearly 14-month-long visit to Vesta.› Full image and caption
Credit: NASA/JPL-Caltech

What's the schedule for Dawn's visit to the largest object in the main asteroid belt?

It's going to be a ball when NASA's Dawn spacecraft finally arrives at the dwarf planet Ceres, and mission managers have now inked in the schedule on Dawn's dance card.

Dawn has been cruising toward Ceres, the largest object in the main asteroid belt between Mars and Jupiter, since September 2012. That's when it departed from its first dance partner, Vesta.

Ceres presents an icy -- possibly watery -- counterpoint to the dry Vesta, where Dawn spent almost 14 months. Vesta and Ceres are two of the largest surviving protoplanets -- bodies that almost became planets -- and will give scientists clues about the planet-forming conditions at the dawn of our solar system.

"Our flight plan around Ceres will be choreographed to be very similar to the strategy that we successfully used around Vesta," said Bob Mase, Dawn's project manager at NASA's Jet Propulsion Laboratory, Pasadena, Calif. "This approach will build on that and enable scientists to make direct comparisons between these two giants of the asteroid belt."

As a prelude, the team will begin approach operations in late January 2015. The next month, Ceres will be big enough in Dawn's view to be imaged and used for navigation purposes. Dawn will arrive at Ceres -- or, more accurately, it will be captured by Ceres' gravity -- in late March or the beginning of April 2015.

Dawn will make its first full characterization of Ceres later in April, at an altitude of about 8,400 miles (13,500 kilometers) above the icy surface. Then, it will spiral down to an altitude of about 2,750 miles (4,430 kilometers), and obtain more science data in its survey science orbit. This phase will last for 22 days, and is designed to obtain a global view of Ceres with Dawn's framing camera, and global maps with the visible and infrared mapping spectrometer (VIR).

Dawn will then continue to spiral its way down to an altitude of about 920 miles (1,480 kilometers), and in August 2015 will begin a two-month phase known as the high-altitude mapping orbit. During this phase, the spacecraft will continue to acquire near-global maps with the VIR and framing camera at higher resolution than in the survey phase. The spacecraft will also image in "stereo" to resolve the surface in 3-D.

Then, after spiraling down for two months, Dawn will begin its closest orbit around Ceres in late November, at a distance of about 233 miles (375 kilometers). The dance at low-altitude mapping orbit will be a long waltz -- three months -- and is specifically designed to acquire data with Dawn's gamma ray and neutron detector (GRaND) and gravity investigation. GRaND will reveal the signatures of the elements on and near the surface. The gravity experiment will measure the tug of the dwarf planet, as monitored by changes in the high-precision radio link to NASA's Deep Space Network on Earth.

At this low-altitude mapping orbit, Dawn will begin using a method of pointing control that engineers have dubbed "hybrid" mode because it utilizes a combination of reaction wheels and thrusters to point the spacecraft. Up until this final mission phase, Dawn will have used just the small thruster jets, which use a fuel called hydrazine, to control its orientation and pointing. While it is possible to explore Ceres completely using only these jets, mission managers want to conserve precious fuel. At this lowest orbit, using two of the reaction wheels to help with pointing will provide the biggest hydrazine savings. So Dawn will be spinning up two of the gyroscope-like devices to aid the thrusters.

In 2011, the Dawn team prepared the capability to operate in a hybrid mode, but it wasn't needed during the Vesta mission. It was only when a second (of four) reaction wheels developed excessive friction while Dawn was leaving Vesta in 2012 that mission managers decided to use the hybrid mode at Ceres. To prove the technique works, Dawn engineers completed a 27-hour in-flight test of the hybrid mode, ending on Nov. 13. It operated just as expected.

"The successful test of this new way to control our orientation gives us great confidence that we'll have a steady hand at Ceres, which will enable us to get really close to a world that we only know now as a fuzzy dot amidst the stars," said Marc Rayman, Dawn's chief engineer and mission director, based at JPL.

Of course, mission planners have built some extra days into the schedule to account for the small uncertainty in the efficiency of the solar arrays at such a large distance from the sun, where sunlight will be very faint. The solar arrays provide power to the ion propulsion system, in addition to operating power for the spacecraft and instruments. Mission planners also account for potential variations in the gravity field of Ceres, which will not be known precisely until Dawn measures them.

"We are expecting changes when we get to Ceres and, fortunately, we built a very capable spacecraft and developed flexible plans to accommodate the unknowns," said Rayman. "There's great excitement in the unexpected -- that's part of the thrill of exploration."

Starting on Dec. 27, Dawn will be closer to Ceres than it will be to Vesta.

"This transition makes us eager to see what secrets Ceres will reveal to us when we get up close to this ancient, giant, icy body," said Christopher Russell, Dawn's principal investigator, based at UCLA. "While Ceres is a lot bigger than the candidate asteroids that NASA is working on sending humans to, many of these smaller bodies are produced by collisions with larger asteroids such as Ceres and Vesta. It is of much interest to determine the nature of small asteroids produced in collisions with Ceres. These might be quite different from the small rocky asteroids associated with Vesta collisions."