NASA’s Curiosity Mars rover used its Mastcam to take an image of this mountain, nicknamed “Rafael Navarro Mountain” after the astrobiologist Rafael Navarro-González, who worked on the mission until he passed away Jan. 26, 2021.

The team of scientists and engineers behind NASA’s Curiosity rover named a hill along the rover’s path on Mars in honor of a recently deceased mission scientist. A craggy hump that stretches 450 feet (120 meters) tall, “Rafael Navarro Mountain” is located on Mount Sharp in northwest Gale Crater.

The inspiration for the name is award-winning scientist Rafael Navarro-González; he died on Jan. 28, 2021, from complications related to COVID-19. A leading astrobiologist in Mexico, Navarro-González was a co-investigator on the Sample Analysis at Mars (SAM), a portable chemistry lab aboard Curiosity that has been sniffing out the chemical makeup of Martian soil, rocks, and air. As such, he helped lead the team that identified ancient organic compounds on Mars; his many accomplishments also included identifying the role of volcanic lightning in the origin of life on Earth. Navarro-González was a researcher at Nuclear Sciences Institute at the National Autonomous University of Mexico in Mexico City. 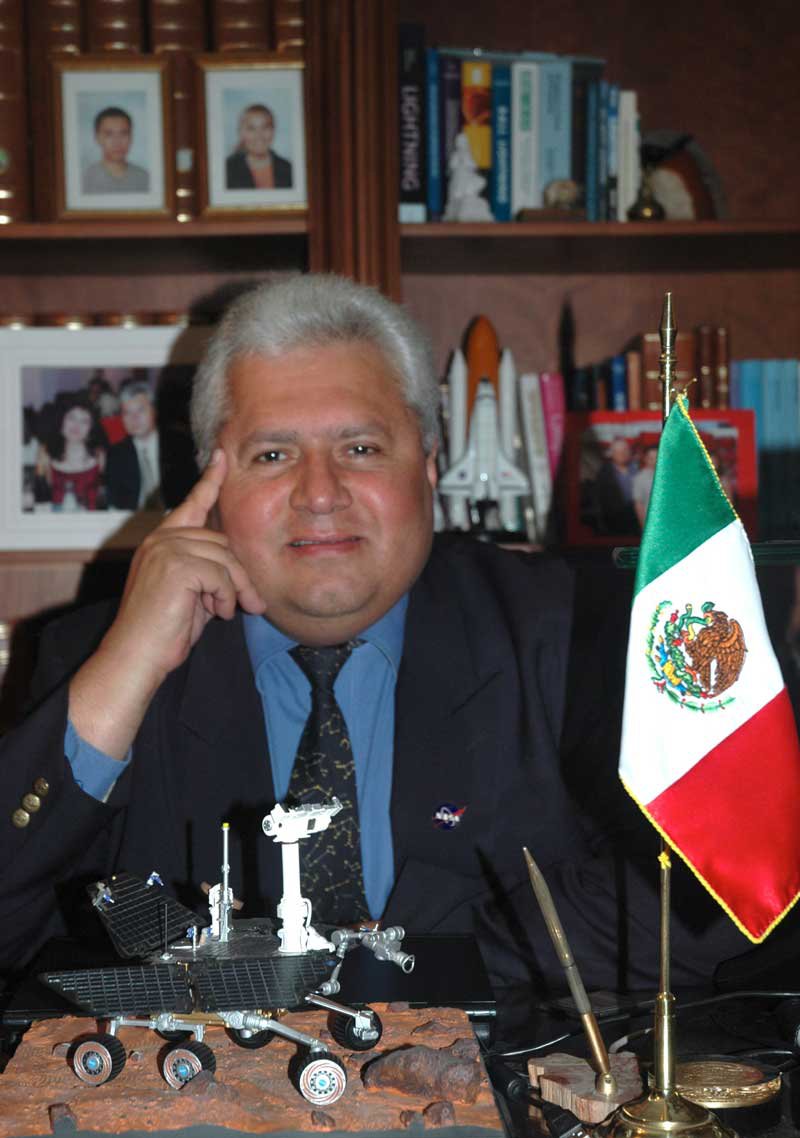 Rafael Navarro-González, an astrobiologist on the Curiosity Mars rover team, passed away Jan. 28, 2021. Among his many accomplishments, he helped lead the team that identified ancient organic compounds on Mars.

“We are truly honored to have a prominent hill named after our dad; it’s his and our dream come true to see this happen,” wrote Navarro-González’s children, Rafael and Karina Navarro Aceves, in a statement to NASA. “Ever since our parents met, their dreams merged together and they became a beautiful team, working very hard for 36 years. Our dad was an accomplished scientist, but above all, a great human being who managed to balance work and family. Our mom, Faby, would always tell him that his name one day would be on Mars, and now that is coming true. We all believe that there must be a party in heaven.”

Rafael Navarro Mountain sits at a major geological transition in Gale Crater from a clay-rich region to one that’s rich in sulfate minerals. Analyzing sulfate minerals may help scientists better understand the major shift in the Martian climate from wetter to drier conditions, according to Ashwin Vasavada, Curiosity’s project scientist based at NASA’s Jet Propulsion Laboratory in Southern California.

“We think of this hill as a gateway,” Vasavada said. “Rafael Navarro Mountain will be constantly in our sights for the next year as Curiosity winds around it.”

The new hill name is informal and meant for the use of Curiosity’s global team members. The team unofficially has named thousands of features in Gale Crater, from drill holes to rocks to dunes. “Team members agree on a name for a particular feature of interest, so that people don’t get confused if we observe it with multiple instruments,” Vasavada said.

Before Rafael Navarro Mountain, the Curiosity team has named four other features after deceased mission scientists: “Jake Matijevic” is the first boulder Curiosity studied and is named after a rover engineer who died in 2012. Curiosity’s first drill hole, “John Klein,” honors the mission’s deputy project manager who died in 2011. “Nathan Bridges Dune” gets its name from a co-investigator on Curiosity’s ChemCam instrument who died in 2017. And “Heinrich Wänke” is a rock target that commemorates Wänke’s contributions to the development of a rover instrument, APXS, which analyzes the chemical makeup of Martian rocks.

While a few other names of notable scientists not involved with Curiosity, such as astronomer Vera Rubin, and even writers, such as Ray Bradbury, grace the features of Gale Crater (which was named after Australian astronomer Walter F. Gale), the rover team’s general strategy is to name regions, and features within them, after areas of geological significance on Earth. For example, the region where Curiosity landed, the site of an ancient lake, was named “Yellowknife” after a city in northwest Canada where scientists gather to kick off geologic expeditions. The features in Martian Yellowknife were named after towns (“Bathurst Inlet”), mountains (“Sayunei”), or lakes (“Knob Lake”) in northern Canada.

This animation shows a proposed route up Mount Sharp that NASA’s Curiosity Mars rover could follow in the future. “Rafael Navarro Mountain” is marked along the way.

In late March, Curiosity left “Nontron,” a region that takes the name of a village in southwestern France where the mineral nontronite was first described by scientists. Nontronite is part of a group of the most common types of clays on Mars. Now, Curiosity will navigate around Rafael Navarro Mountain, stopping in different regions of scientific interest to drill samples.

“We won’t have Rafael with us for this next stretch, but we will bring his considerable expertise, creativity, and great enthusiasm for astrobiology studies to bear on our investigation of the ancient habitable environments in Gale Crater,” said Paul Mahaffy, principal investigator of Curiosity’s SAM experiment, who’s based at NASA’s Goddard Space Flight Center in Greenbelt, Maryland. “Rafael was a good friend and dedicated scientist, and it has been a privilege and honor for our Mars exploration team to work with him over the years.”