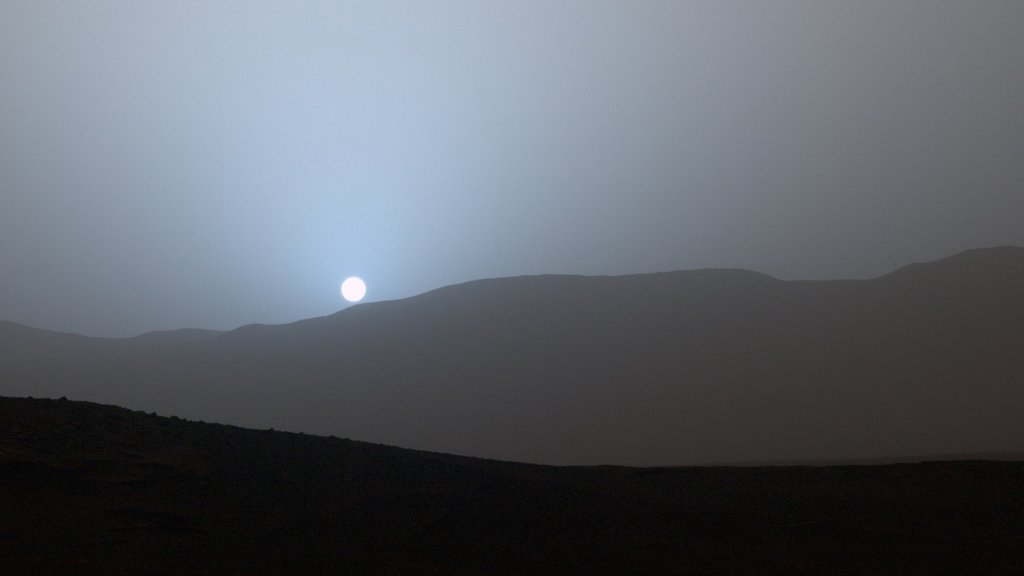 NASA's Curiosity Mars rover recorded this view of the sun setting at the close of the mission's 956th Martian day, or sol (April 15, 2015), from the rover's location in Gale Crater.› Full image and caption
Credit: NASA/JPL-Caltech/MSSS/Texas A&amp;M Univ.

A series of images is combined into an animation at:

For a single-frame scenic view, see:

Curiosity used its Mast Camera (Mastcam) to record the sunset during an evening of skywatching on April 15, 2015.

"The colors come from the fact that the very fine dust is the right size so that blue light penetrates the atmosphere slightly more efficiently," said Mark Lemmon of Texas A&M University, College Station, the Curiosity science-team member who planned the observations. "When the blue light scatters off the dust, it stays closer to the direction of the sun than light of other colors does. The rest of the sky is yellow to orange, as yellow and red light scatter all over the sky instead of being absorbed or staying close to the sun."

Just as colors are made more dramatic in sunsets on Earth, Martian sunsets make the blue near the sun's part of the sky much more prominent, while normal daylight makes the rusty color of the dust more prominent.

Since its August 2012 landing inside Mars' Gale Crater, Curiosity has been studying the planet's ancient and modern environments.