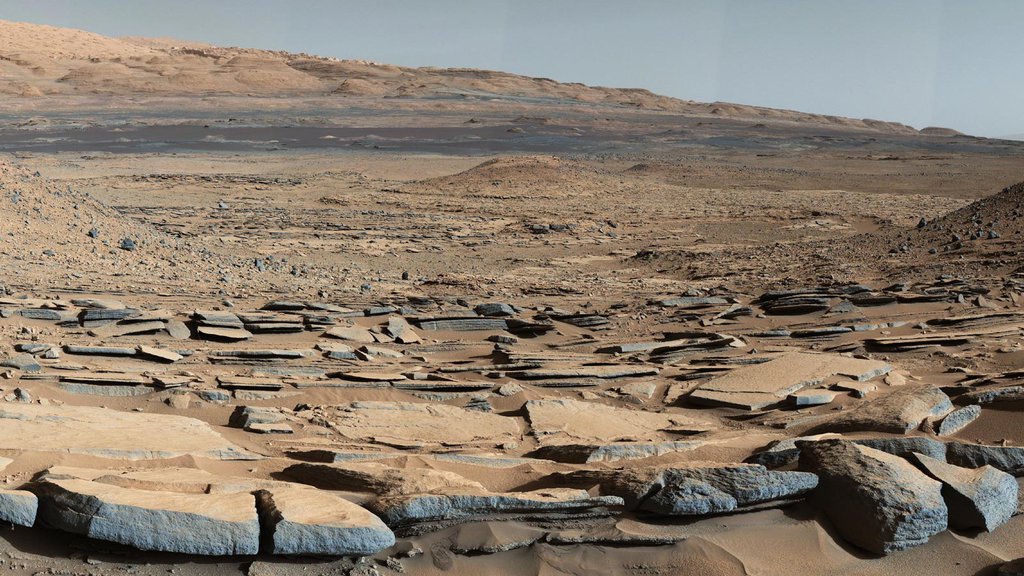 A view from the "Kimberley" formation on Mars taken by NASA's Curiosity rover.› Full image and caption
Credit: NASA/JPL-Caltech/MSSS 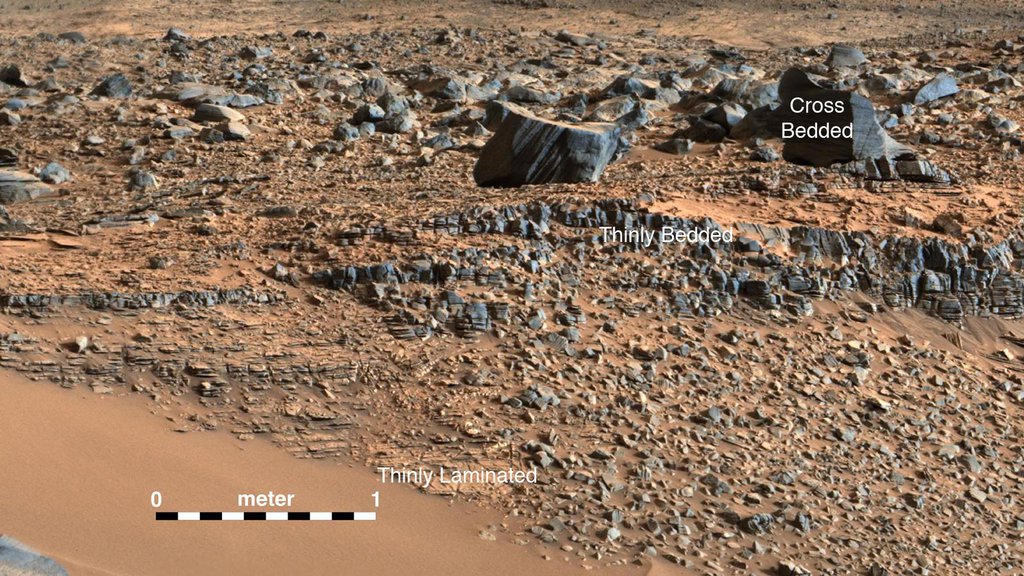 A new study from NASA's Mars Science Laboratory/Curiosity team confirms that Mars was, billions of years ago, capable of storing water in lakes over an extended period.

A new study from the team behind NASA's Mars Science Laboratory/Curiosity has confirmed that Mars was once, billions of years ago, capable of storing water in lakes over an extended period of time.

Using data from the Curiosity rover, the team has determined that, long ago, water helped deposit sediment into Gale Crater, where the rover landed more than three years ago. The sediment deposited as layers that formed the foundation for Mount Sharp, the mountain found in the middle of the crater today.

"Observations from the rover suggest that a series of long-lived streams and lakes existed at some point between about 3.8 to 3.3 billion years ago, delivering sediment that slowly built up the lower layers of Mount Sharp," said Ashwin Vasavada, Mars Science Laboratory project scientist at NASA's Jet Propulsion Laboratory in Pasadena, California, and co-author of the new Science article to be published Friday, Oct. 9.

The findings build upon previous work that suggested there were ancient lakes on Mars, and add to the unfolding story of a wet Mars, both past and present. Last month, NASA scientists confirmed current water flows on Mars.

"What we thought we knew about water on Mars is constantly being put to the test," said Michael Meyer, lead scientist for NASA's Mars Exploration Program at NASA Headquarters in Washington. "It's clear that the Mars of billions of years ago more closely resembled Earth than it does today. Our challenge is to figure out how this more clement Mars was even possible, and what happened to that wetter Mars."

Before Curiosity landed on Mars in 2012, scientists proposed that Gale Crater had filled with layers of sediments. Some hypotheses were "dry," suggesting that sediment accumulated from wind-blown dust and sand. Others focused on the possibility that sediment layers were deposited in ancient lakes.

The latest results from Curiosity indicate that these wetter scenarios were correct for the lower portions of Mount Sharp. Based on the new analysis, the filling of at least the bottom layers of the mountain occurred mostly by ancient rivers and lakes over a period of less than 500 million years.

"During the traverse of Gale, we have noticed patterns in the geology where we saw evidence of ancient fast-moving streams with coarser gravel, as well as places where streams appear to have emptied out into bodies of standing water," Vasavada said. "The prediction was that we should start seeing water-deposited, fine-grained rocks closer to Mount Sharp. Now that we've arrived, we're seeing finely laminated mudstones in abundance that look like lake deposits."

The mudstone indicates the presence of bodies of standing water in the form of lakes that remained for long periods of time, possibly repeatedly expanding and contracting during hundreds to millions of years. These lakes deposited the sediment that eventually formed the lower portion of the mountain.

"Paradoxically, where there is a mountain today there was once a basin, and it was sometimes filled with water," said John Grotzinger, the former project scientist for Mars Science Laboratory at the California Institute of Technology in Pasadena, and lead author of the new report. "We see evidence of about 250 feet (75 meters) of sedimentary fill, and based on mapping data from NASA's Mars Reconnaissance Orbiter and images from Curiosity's camera, it appears that the water-transported sedimentary deposition could have extended at least 500 to 650 feet (150 to 200) meters above the crater floor."

Furthermore, the total thickness of sedimentary deposits in Gale Crater that indicate interaction with water could extend higher still, perhaps up to one-half mile (800 meters) above the crater floor.

Above 800 meters, Mount Sharp shows no evidence of hydrated strata, and that is the bulk of what forms Mount Sharp. Grotzinger suggests that perhaps this later segment of the crater's history may have been dominated by dry, wind-driven deposits, as was once imagined for the lower part explored by Curiosity.

A lingering question surrounds the original source of the water that carried sediment into the crater. For flowing water to have existed on the surface, Mars must have had a thicker atmosphere and warmer climate than has been theorized for the ancient era when Gale Crater experienced the intense geological activity. However, current models of this paleoclimate have, literally, come up dry.

At least some of the water may have been supplied to the lakes by snowfall and rain in the highlands of the Gale Crater rim. Some have made the argument that there was an ocean in the plains north of the crater, but that does not explain how the water managed to exist as a liquid for extended periods of time on the surface.

"We have tended to think of Mars as being simple," Grotzinger mused. "We once thought of the Earth as being simple too. But the more you look into it, questions come up because you're beginning to fathom the real complexity of what we see on Mars. This is a good time to go back to reevaluate all our assumptions. Something is missing somewhere."

More information about Mars Science Laboratory is online at: