NASA’s Curiosity Mars rover captured these clouds just after sunset on March 19, 2021, the 3,063rd Martian day, or sol, of the rover’s mission. The image is made up of 21 individual images stitched together and color-corrected so that the scene appears as it would to the human eye.

The type of carbon is associated with biological processes on Earth. Curiosity scientists offer several explanations for the unusual carbon signals.

After analyzing powdered rock samples collected from the surface of Mars by NASA’s Curiosity rover, scientists have announced that several of the samples are rich in a type of carbon that on Earth is associated with biological processes.

While the finding is intriguing, it doesn’t necessarily point to ancient life on Mars, as scientists have not yet found conclusive supporting evidence of ancient or current biology there, such as sedimentary rock formations produced by ancient bacteria, or a diversity of complex organic molecules formed by life.

“We’re finding things on Mars that are tantalizingly interesting, but we would really need more evidence to say we’ve identified life,” said Paul Mahaffy, who served as the principal investigator of the Sample Analysis at Mars (SAM) chemistry lab aboard Curiosity until retiring from NASA’s Goddard Space Flight Center in Greenbelt, Maryland, in December 2021. “So we’re looking at what else could have caused the carbon signature we’re seeing, if not life.”

In a report of their findings to be published in the Proceedings of the National Academy of Sciences journal on Jan. 18, Curiosity scientists offer several explanations for the unusual carbon signals they detected. Their hypotheses are drawn partly from carbon signatures on Earth, but scientists warn the two planets are so different they can’t make definitive conclusions based on Earth examples. 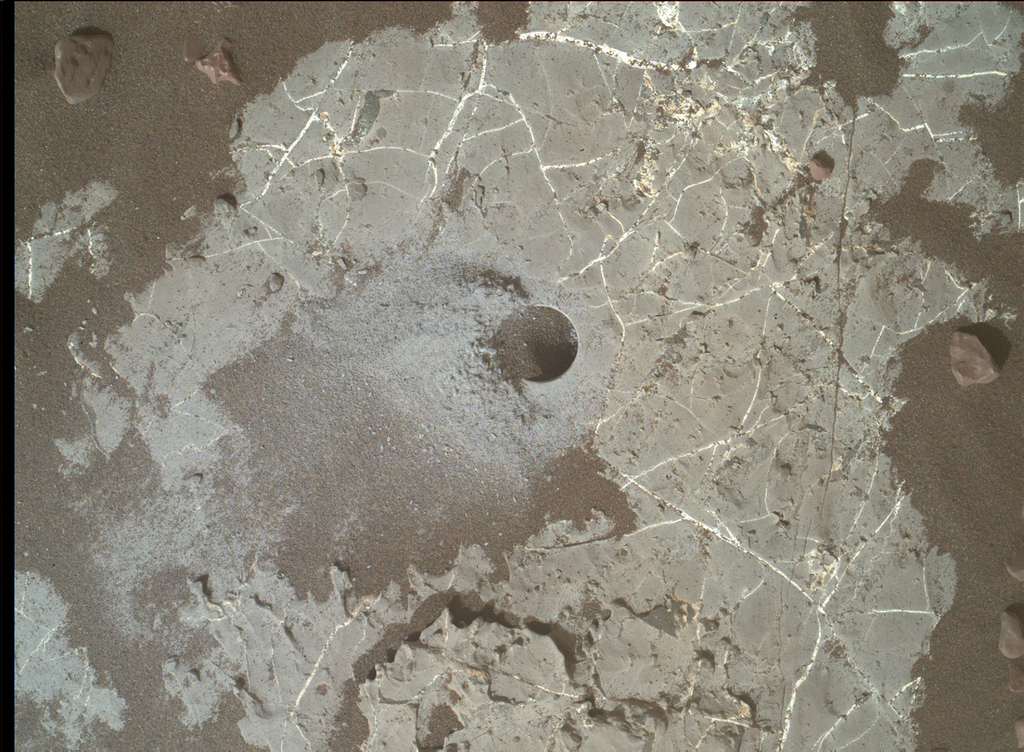 This image shows the Highfield drill hole made by NASA’s Mars Curiosity rover as it was collecting a sample on “Vera Rubin Ridge” in Gale Crater.

“The hardest thing is letting go of Earth and letting go of that bias that we have and really trying to get into the fundamentals of the chemistry, physics, and environmental processes on Mars,” said Goddard astrobiologist Jennifer L. Eigenbrode, who participated in the carbon study. Previously, Eigenbrode led an international team of Curiosity scientists in the detection of myriad organic molecules – ones that contain carbon – on the Martian surface.

“We need to open our minds and think outside the box,” Eigenbrode said, “and that’s what this paper does.”

The biological explanation Curiosity scientists present in their paper is inspired by Earth life. It involves ancient bacteria in the surface that would have produced a unique carbon signature as they released methane into the atmosphere where ultraviolet light would have converted that gas into larger, more complex molecules. These new molecules would have rained down to the surface and now could be preserved with their distinct carbon signature in Martian rocks.

Two other hypotheses offer nonbiological explanations. One suggests the carbon signature could have resulted from the interaction of ultraviolet light with carbon dioxide gas in the Martian atmosphere, producing new carbon-containing molecules that would have settled to the surface. And the other speculates that the carbon could have been left behind from a rare event hundreds of millions of years ago when the solar system passed through a giant molecular cloud rich in the type of carbon detected.

Stitched together from 28 images, this view from NASA’s Curiosity Mars rover was captured on April 9, 2020, the 2,729th Martian day, or sol, of the mission. It shows the landscape of the Stimson sandstone formation in Gale Crater. In this general location, Curiosity drilled the Edinburgh drill hole, which was enriched in carbon-12.

“All three explanations fit the data,” said Christopher House, a Curiosity scientist based at Pennsylvania State University who led the carbon study. “We simply need more data to rule them in or out.”

To analyze carbon in the Martian surface, House’s team used the Tunable Laser Spectrometer (TLS) instrument inside the SAM lab. SAM heated 24 samples from geologically diverse locations in the planet’s Gale Crater to about 1,500 degrees Fahrenheit, or 850 degrees Celsius, to release the gases inside. Then the TLS measured the isotopes from some of the reduced carbon that was set free in the heating process. Isotopes are atoms of an element with different masses due to their distinct number of neutrons, and they are instrumental in understanding the chemical and biological evolution of planets.

Carbon is particularly important since this element is found in all life on Earth; it flows continuously through the air, water, and ground in a cycle that’s well understood thanks to isotope measurements.

For instance, living creatures on Earth use the smaller, lighter carbon-12 atom to metabolize food or for photosynthesis versus the heavier carbon-13 atom. Thus, significantly more carbon-12 than carbon-13 in ancient rocks, along with other evidence, suggests to scientists they’re looking at signatures of life-related chemistry. Looking at the ratio of these two carbon isotopes helps Earth scientists tell what type of life they’re looking at and the environment it lived in.

On Mars, Curiosity researchers found that nearly half of their samples had surprisingly large amounts of carbon-12 compared to what scientists have measured in the Martian atmosphere and meteorites. These samples came from five distinct locations in Gale Crater, the researchers report, which may be related in that all the locations have well-preserved, ancient surfaces.

“On Earth, processes that would produce the carbon signal we’re detecting on Mars are biological,” House said. “We have to understand whether the same explanation works for Mars, or if there are other explanations, because Mars is very different.”

Mars is unique because it may have started off with a different mix of carbon isotopes than Earth 4.5 billion years ago. Mars is smaller, cooler, has weaker gravity, and different gases in its atmosphere. Additionally, the carbon on Mars could be cycling without any life involved.

Steele noted that scientists are in the early stages of understanding how carbon cycles on Mars and, thus, how to interpret isotopic ratios and the nonbiological activities that could lead to those ratios. Curiosity, which arrived on the Red Planet in 2012, is the first rover with tools to study carbon isotopes in the surface. Other missions have collected information about isotopic signatures in the atmosphere, and scientists have measured ratios of Martian meteorites that have been collected on Earth.

“Defining the carbon cycle on Mars is absolutely key to trying to understand how life could fit into that cycle,” Steele said. “We have done that really successfully on Earth, but we are just beginning to define that cycle for Mars.”

Curiosity scientists will continue to measure carbon isotopes to see if they get a similar signature when the rover visits other sites suspected to have well-preserved ancient surfaces. To further test the biological hypothesis involving methane-producing microorganisms, the Curiosity team would like to analyze the carbon content of a methane plume released from the surface. The rover unexpectedly encountered such a plume in 2019 but there’s no way to predict whether that will happen again. Otherwise, researchers point out that this study provides guidance to the team behind NASA’s Perseverance rover on the best types of samples to collect to confirm the carbon signature and determine definitively whether it’s coming from life or not. Perseverance is collecting samples from the Martian surface for possible future return to Earth.