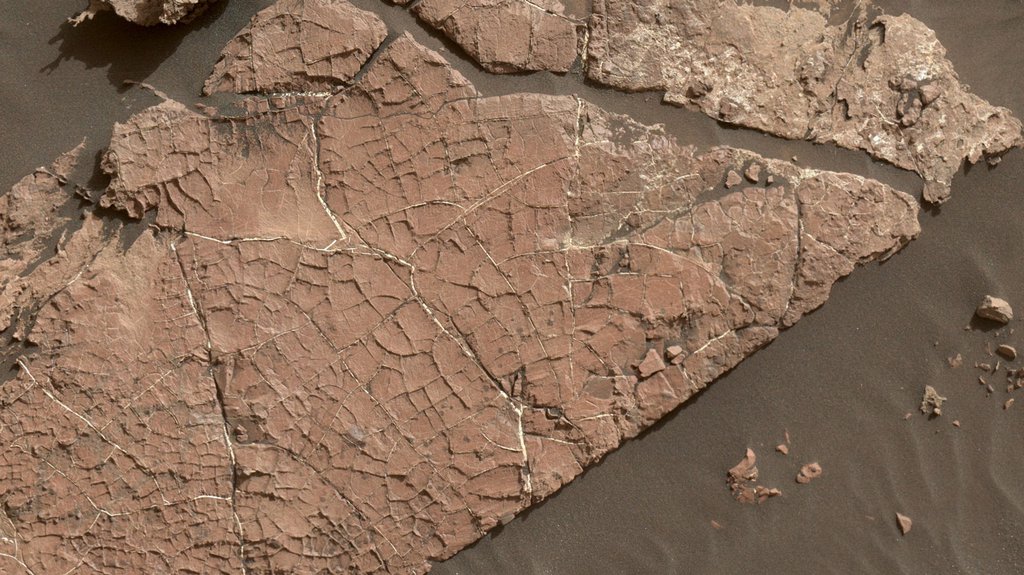 The network of cracks in this Martian rock slab called "Old Soaker" may have formed from the drying of a mud layer more than 3 billion years ago. The view spans about 3 feet (90 centimeters) left-to-right and combines three images taken by the MAHLI camera on the arm of NASA's Curiosity Mars rover.› Full image and caption
Credit: NASA/JPL-Caltech/MSSS

If you could travel back in time 3.5 billion years, what would Mars look like? The picture is evolving among scientists working with NASA's Curiosity rover.

Imagine ponds dotting the floor of Gale Crater, the 100-mile-wide (150-kilometer-wide) ancient basin that Curiosity is exploring. Streams might have laced the crater's walls, running toward its base. Watch history in fast forward, and you'd see these waterways overflow then dry up, a cycle that probably repeated itself numerous times over millions of years.

That is the landscape described by Curiosity scientists in a Nature Geoscience paper published today. The authors interpret rocks enriched in mineral salts discovered by the rover as evidence of shallow briny ponds that went through episodes of overflow and drying. The deposits serve as a watermark created by climate fluctuations as the Martian environment transitioned from a wetter one to the freezing desert it is today.

Scientists would like to understand how long this transition took and when exactly it occurred. This latest clue may be a sign of findings to come as Curiosity heads toward a region called the "sulfate-bearing unit," which is expected to have formed in an even drier environment. It represents a stark difference from lower down the mountain, where Curiosity discovered evidence of persistent freshwater lakes.

Gale Crater is the ancient remnant of a massive impact. Sediment carried by water and wind eventually filled in the crater floor, layer by layer. After the sediment hardened, wind carved the layered rock into the towering Mount Sharp, which Curiosity is climbing today. Now exposed on the mountain's slopes, each layer reveals a different era of Martian history and holds clues about the prevailing environment at the time.

"We went to Gale Crater because it preserves this unique record of a changing Mars," said lead author William Rapin of Caltech. "Understanding when and how the planet's climate started evolving is a piece of another puzzle: When and how long was Mars capable of supporting microbial life at the surface?"

He and his co-authors describe salts found across a 500-foot-tall (150-meter-tall) section of sedimentary rocks called "Sutton Island," which Curiosity visited in 2017. Based on a series of mud cracks at a location named "Old Soaker," the team already knew the area had intermittent drier periods. But the Sutton Island salts suggest the water also concentrated into brine.

Typically, when a lake dries up entirely, it leaves piles of pure salt crystals behind. But the Sutton Island salts are different: For one thing, they're mineral salts, not table salt. They're also mixed with sediment, suggesting they crystallized in a wet environment - possibly just beneath evaporating shallow ponds filled with briny water.

Given that Earth and Mars were similar in their early days, Rapin speculated that Sutton Island might have resembled saline lakes on South America's Altiplano. Streams and rivers flowing from mountain ranges into this arid, high-altitude plateau lead to closed basins similar to Mars' ancient Gale Crater. Lakes on the Altiplano are heavily influenced by climate in the same way as Gale.

"During drier periods, the Altiplano lakes become shallower, and some can dry out completely," Rapin said. "The fact that they're vegetation-free even makes them look a little like Mars."

Filled with briny lakes, the Quisquiro salt flat in South America's Altiplano represents the kind of landscape that scientists think may have existed in Gale Crater, which NASA's Curiosity rover is exploring. Credit: Maksym Bocharov Full image and caption

Signs of a Drying Mars

Sutton Island's salt-enriched rocks are just one clue among several the rover team is using to piece together how the Martian climate changed. Looking across the entirety of Curiosity's journey, which began in 2012, the science team sees a cycle of wet to dry across long timescales on Mars.

"As we climb Mount Sharp, we see an overall trend from a wet landscape to a drier one," said Curiosity Project Scientist Ashwin Vasavada of NASA's Jet Propulsion Laboratory in Pasadena, California. JPL leads the Mars Science Laboratory mission that Curiosity is a part of. "But that trend didn't necessarily occur in a linear fashion. More likely, it was messy, including drier periods, like what we're seeing at Sutton Island, followed by wetter periods, like what we're seeing in the 'clay-bearing unit' that Curiosity is exploring today."

This animation demonstrates the salty ponds and streams that scientists think may have been left behind as Gale Crater dried out over time. The bottom of the image is the floor of Gale Crater, with the peak being the side of Mount Sharp. Credit:ASU Knowledge Enterprise Development (KED), Michael Northrop > Download larger gif

Up until now, the rover has encountered lots of flat sediment layers that had been gently deposited at the bottom of a lake. Team member Chris Fedo, who specializes in the study of sedimentary layers at the University of Tennessee, noted that Curiosity is currently running across large rock structures that could have formed only in a higher-energy environment such as a windswept area or flowing streams.

Wind or flowing water piles sediment into layers that gradually incline. When they harden into rock, they become large structures similar to "Teal Ridge," which Curiosity investigated this past summer.

"Finding inclined layers represents a major change, where the landscape isn't completely underwater anymore," said Fedo. "We may have left the era of deep lakes behind."

Curiosity has already spied more inclined layers in the distant sulfate-bearing unit. The science team plans to drive there in the next couple years and investigate its many rock structures. If they formed in drier conditions that persisted for a long period, that might mean that the clay-bearing unit represents an in-between stage - a gateway to a different era in Gale Crater's watery history.

"We can't say whether we're seeing wind or river deposits yet in the clay-bearing unit, but we're comfortable saying is it's definitely not the same thing as what came before or what lies ahead," Fedo said.