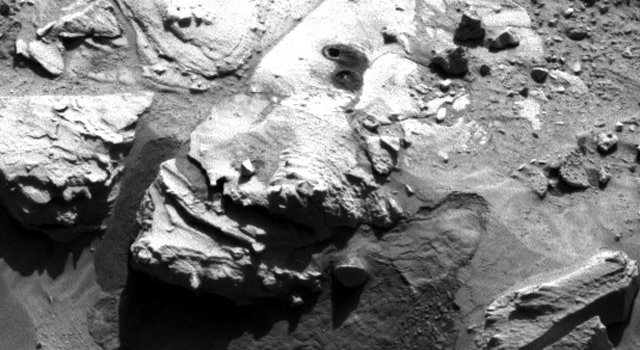 This May 5, 2014, image from the Navigation Camera on NASA's Curiosity Mars rover shows two holes at top center drilled into a sandstone target called "Windjana." The farther hole was created by the rover's drill while it collected rock-powder sample material from the interior of the rock.› Full image and caption

NASA's Curiosity Mars rover collected powder drilled from a rock on Mars on Monday, the third time this has ever been done and the first time on a sandstone target.

Portions of rock powder collected by the hammering drill on NASA's Curiosity Mars rover from a slab of Martian sandstone will be delivered to the rover's internal instruments.

The full-depth hole for sample collection is close to a shallower test hole drilled last week in the same rock, which gave researchers a preview of the interior material as tailings around the hole.

"The drill tailings from this rock are darker-toned and less red than we saw at the two previous drill sites," said Jim Bell of Arizona State University, Tempe, deputy principal investigator for Curiosity's Mast Camera (Mastcam). "This suggests that the detailed chemical and mineral analysis that will be coming from Curiosity's other instruments could reveal different materials than we've seen before. We can't wait to find out!"

The mission's two previous rock-drilling sites, at mudstone targets in the Yellowknife Bay area, yielded evidence last year of an ancient lakebed environment with key chemical elements and a chemical energy source that long ago provided conditions favorable for microbial life. The rover's current location is at a waypoint called "The Kimberley," about 2.5 miles (4 kilometers) southwest of Yellowknife Bay, and along the route toward the mission's long-term destination on lower slopes of Mount Sharp.

Sample material from Windjana will be sieved, then delivered in coming days to onboard laboratories for determining the mineral and chemical composition: the Chemistry and Mineralogy instrument (CheMin) and the Sample Analysis at Mars instrument (SAM). The analysis of the sample may continue as the rover drives on from The Kimberley toward Mount Sharp. One motive for the team's selection of Windjana for drilling is to analyze the cementing material that holds together sand-size grains in this sandstone.