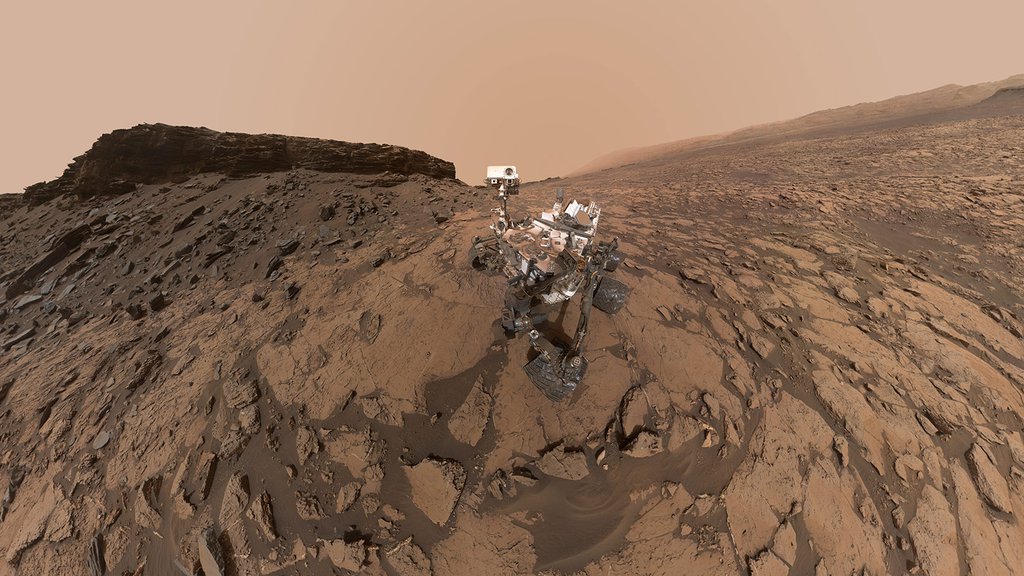 This September 2016 self-portrait of NASA's Curiosity Mars rover shows the vehicle at the "Quela" drilling location in the scenic "Murray Buttes" area on lower Mount Sharp. The panorama was stitched together from multiple images taken by the MAHLI camera at the end of the rover's arm.› Full image and caption
Credit: NASA/JPL-Caltech/MSSS 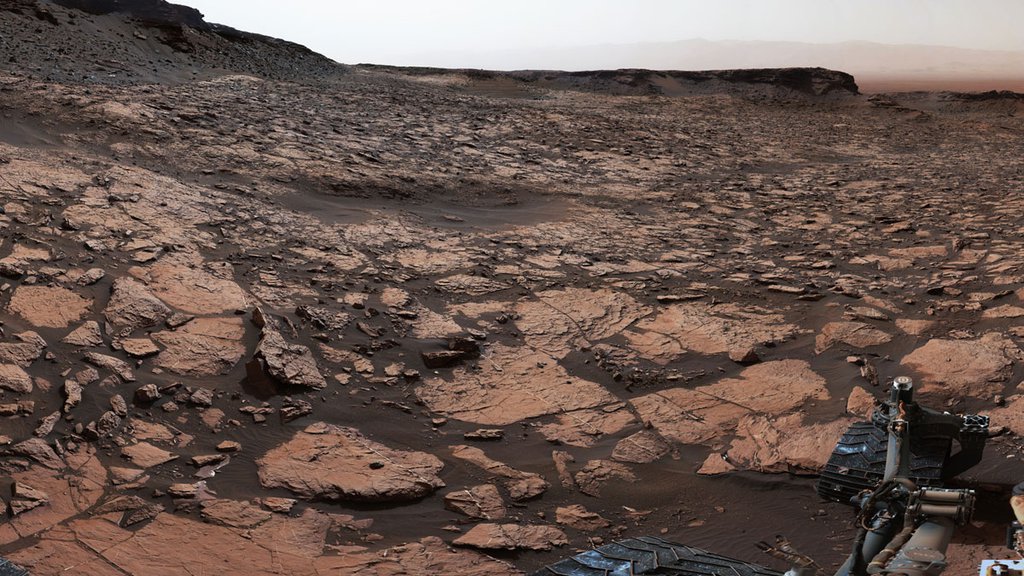 This 360-degree panorama was acquired on Sept. 4, 2016, by the Mast Camera on NASA's Curiosity Mars rover while the rover was in a scenic area called "Murray Buttes" on lower Mount Sharp. The flat-topped mesa near the center of the scene rises to about 39 feet above the surrounding plain.› Full image and caption
Credit: NASA/JPL-Caltech/MSSS 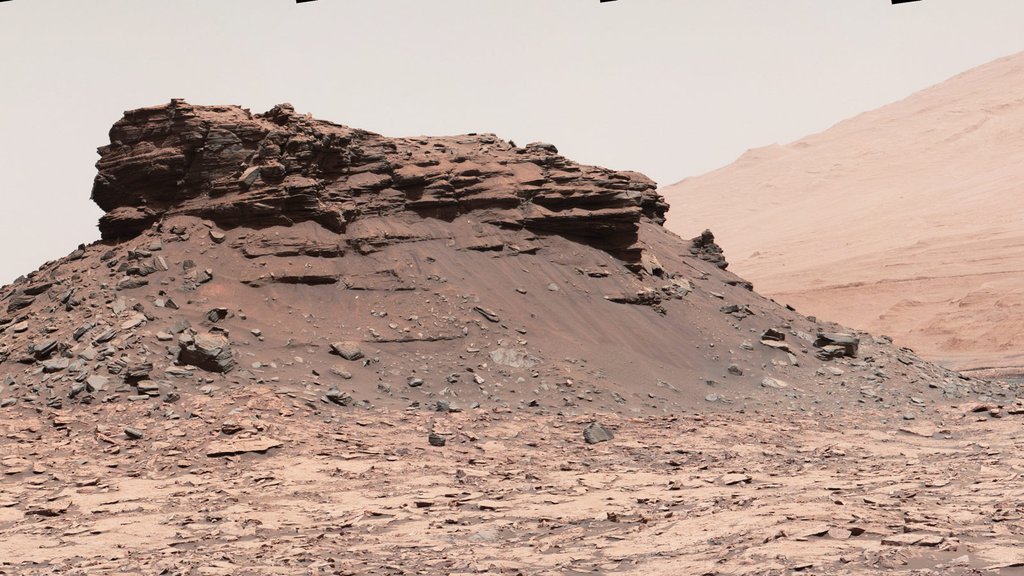 The two prominent mesas in this Aug. 18, 2016, view of Mars' "Murray Buttes" region from the Curiosity Mars rover's Mastcam are about 260 feet (about 80 meters) apart. The one on the right is about 33 feet high, and its top is about 270 feet from the rover's position when the images were taken.› Full image and caption
Credit: NASA/JPL-Caltech/MSSS 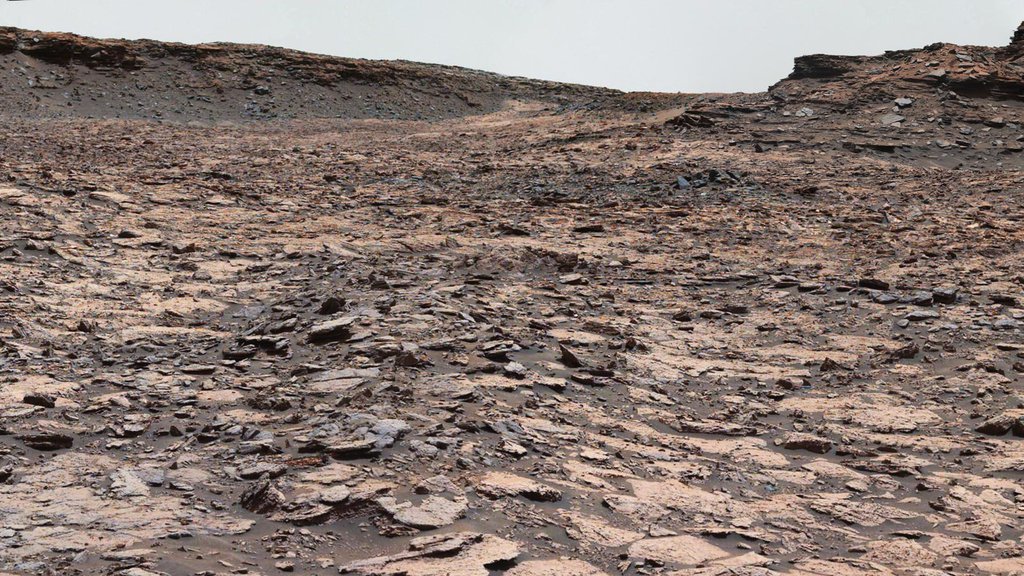 The mesa in the center of this scene from the "Murray Buttes" area on Mars is longer than a football field. The panorama combines images taken by the Mastcam on NASA's Curiosity Mars rover on Aug. 22 and Aug. 23, 2016.› Full image and caption
Credit: NASA/JPL-Caltech/MSSS 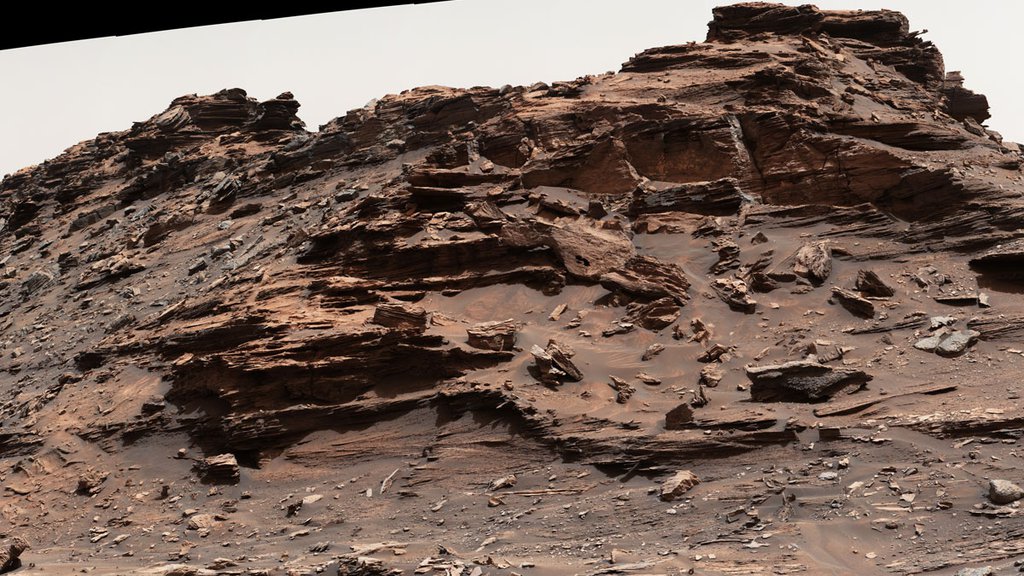 The top of the butte in this Sept. 1, 2016, scene from the Mast Camera (Mastcam) on NASA's Curiosity Mars rover stands about 16 feet above the rover and about 82 feet east-southeast of the rover. The site is in the "Murray Buttes" area of lower Mount Sharp, and this particular butte is called "M9a."› Full image and caption
Credit: NASA/JPL-Caltech/MSSS 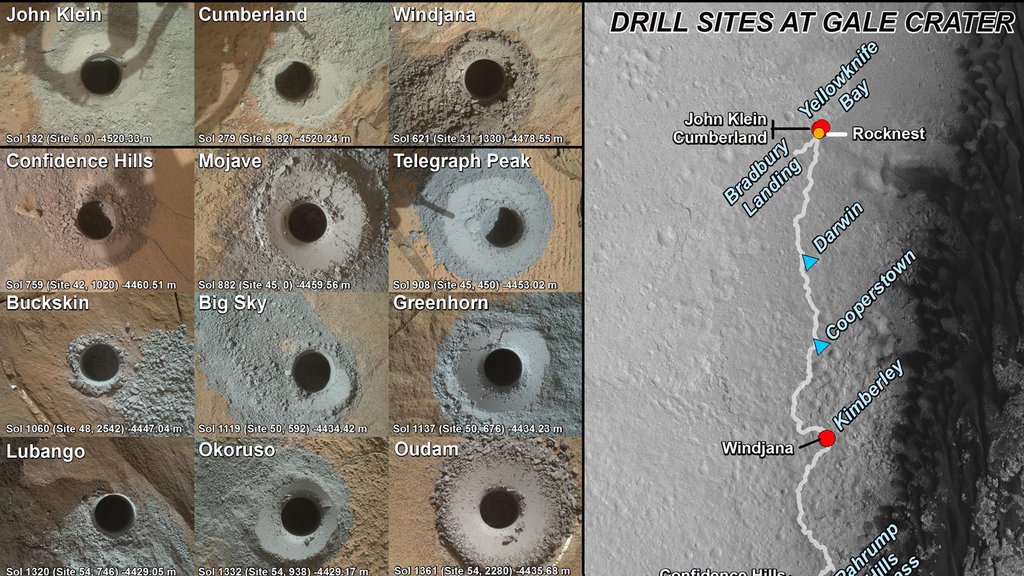 This graphic maps locations of the sites where NASA's Curiosity Mars rover collected its first 18 rock or soil samples for laboratory analysis inside the vehicle. It also presents images of the drilled holes where 14 rock-powder samples were acquired, most recently at "Quela," on Sept. 18, 2016.› Full image and caption
Credit: NASA/JPL-Caltech/MSSS/UA

After collecting drilled rock powder from a very scenic area, NASA's Curiosity rover is driving toward uphill destinations as part of its two-year mission extension.

After collecting drilled rock powder in arguably the most scenic landscape yet visited by a Mars rover, NASA's Curiosity mobile laboratory is driving toward uphill destinations as part of its two-year mission extension that commenced Oct. 1.

The destinations include a ridge capped with material rich in the iron-oxide mineral hematite, about a mile-and-a-half (two-and-a-half kilometers) ahead, and an exposure of clay-rich bedrock beyond that.

These are key exploration sites on lower Mount Sharp, which is a layered, Mount-Rainier-size mound where Curiosity is investigating evidence of ancient, water-rich environments that contrast with the harsh, dry conditions on the surface of Mars today.

"We continue to reach higher and younger layers on Mount Sharp," said Curiosity Project Scientist Ashwin Vasavada, of NASA's Jet Propulsion Laboratory, Pasadena, California. "Even after four years of exploring near and on the mountain, it still has the potential to completely surprise us."

Hundreds of photos Curiosity took in recent weeks amid a cluster of mesas and buttes of diverse shapes are fresh highlights among the more than 180,000 images the rover has taken since landing on Mars in August 2012. Newly available vistas include the rover's latest self-portrait from the color camera at the end of its arm and a scenic panorama from the color camera at the top of the mast.

"Bidding good-bye to 'Murray Buttes,' Curiosity's assignment is the ongoing study of ancient habitability and the potential for life," said Curiosity Program Scientist Michael Meyer at NASA Headquarters, Washington. "This mission, as it explores the succession of rock layers, is reading the 'pages' of Martian history -- changing our understanding of Mars and how the planet has evolved. Curiosity has been and will be a cornerstone in our plans for future missions."

The component images of the self-portrait were taken near the base of one of the Murray Buttes, at the same site where the rover used its drill on Sept. 18 to acquire a sample of rock powder. An attempt to drill at this site four days earlier had halted prematurely due to a short-circuit issue that Curiosity had experienced previously, but the second attempt successfully reached full depth and collected sample material. After departing the buttes area, Curiosity delivered some of the rock sample to its internal laboratory for analysis.

This latest drill site -- the 14th for Curiosity -- is in a geological layer about 600 feet (180 meters) thick, called the Murray formation. Curiosity has climbed nearly half of this formation's thickness so far and found it consists primarily of mudstone, formed from mud that accumulated at the bottom of ancient lakes. The findings indicate that the lake environment was enduring, not fleeting. For roughly the first half of the new two-year mission extension, the rover team anticipates investigating the upper half of the Murray formation.

"We will see whether that record of lakes continues further," Vasavada said. "The more vertical thickness we see, the longer the lakes were present, and the longer habitable conditions existed here. Did the ancient environment change over time? Will the type of evidence we've found so far transition to something else?"

The "Hematite Unit" and "Clay Unit" above the Murray formation were identified from Mars orbiter observations before Curiosity's landing. Information about their composition, from the Compact Reconnaissance Imaging Spectrometer aboard NASA's Mars Reconnaissance Orbiter, made them high priorities as destinations for the rover mission. Both hematite and clay typically form in wet environments.

Vasavada said, "The Hematite and the Clay units likely indicate different environments from the conditions recorded in older rock beneath them and different from each other. It will be interesting to see whether either or both were habitable environments."

NASA approved Curiosity's second extended mission this summer on the basis of plans presented by the rover team. Additional extensions for exploring farther up Mount Sharp may be considered in the future. The Curiosity mission has already achieved its main goal of determining whether the landing region ever offered environmental conditions that would have been favorable for microbial life, if Mars has ever hosted life. The mission found evidence of ancient rivers and lakes, with a chemical energy source and all of the chemical ingredients necessary for life as we know it.

The mission is also monitoring the modern environment of Mars, including natural radiation levels. Along with other robotic missions to the Red Planet, it is an important piece of NASA's Journey to Mars, leading toward human crew missions in the 2030s. JPL, a division of Caltech in Pasadena, California, manages the Mars Science Laboratory Project for NASA's Science Mission Directorate and built the project's Curiosity rover. For more information about Curiosity, visit: