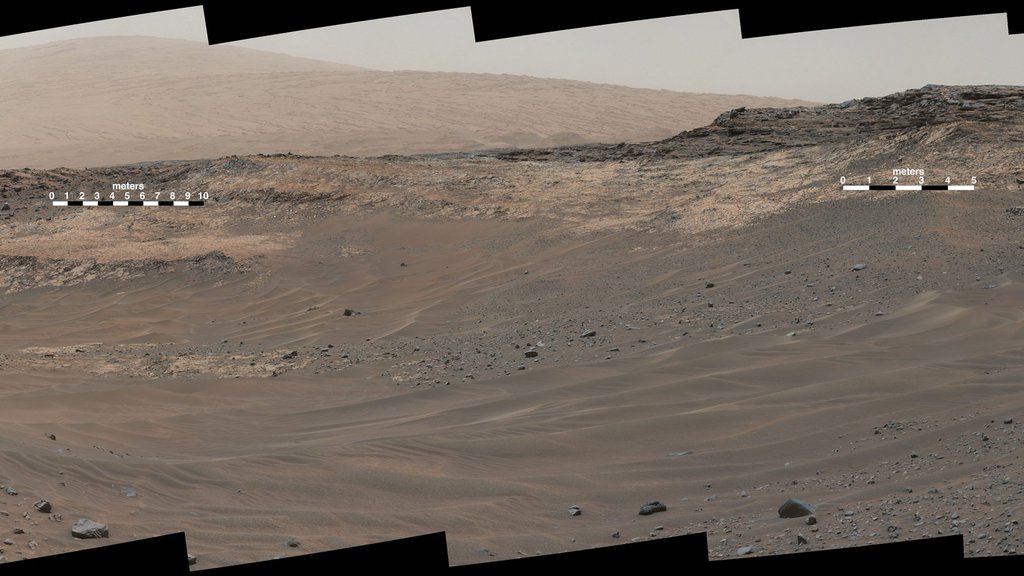 This May 10, 2015, view from Curiosity's Mastcam shows terrain judged difficult for traversing between the rover and an outcrop in the middle distance where a pale rock unit meets a darker rock unit above it. The rover team decided not to approach this outcrop and identified an alternative.› Full image and caption
Credit: NASA/JPL-Caltech/MSSS 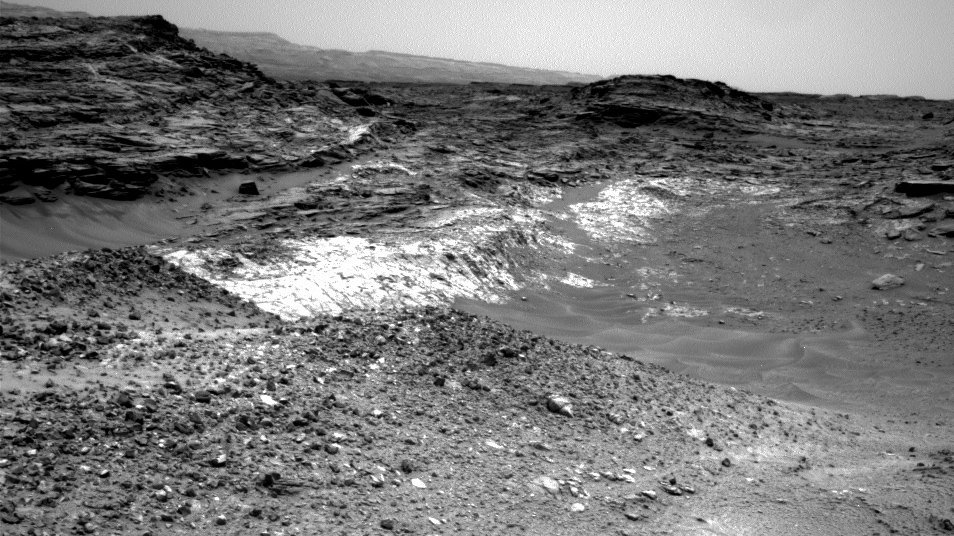 The drive of about 72 feet (22 meters) up slopes as steep as 21 degrees brought Curiosity close to a target area where two distinctive types of bedrock meet. The rover science team wants to examine an outcrop that contains the contact between the pale rock unit the mission analyzed lower on Mount Sharp and a darker, bedded rock unit that the mission has not yet examined up close.

Two weeks ago, Curiosity was headed for a comparable geological contact farther south. Foiled by slippery slopes on the way there, the team rerouted the vehicle and chose a westward path.The mission's strategic planning keeps multiple route options open to deal with such situations.

"Mars can be very deceptive," said Chris Roumeliotis, Curiosity's lead rover driver at NASA's Jet Propulsion Laboratory, Pasadena, California. "We knew that polygonal sand ripples have caused Curiosity a lot of drive slip in the past, but there appeared to be terrain with rockier, more consolidated characteristics directly adjacent to these ripples. So we drove around the sand ripples onto what we expected to be firmer terrain that would give Curiosity better traction. Unfortunately, this terrain turned out to be unconsolidated material too, which definitely surprised us and Curiosity."

In three out of four drives between May 7 and May 13, Curiosity experienced wheel slippage in excess of the limit set for the drive, and it stopped mid-drive for safety. The rover's onboard software determines the amount of slippage occurring by comparing the wheel-rotation tally to actual drive distance calculated from analysis of images taken during the drive.

The rover was heading generally southward from near the base of a feature called "Jocko Butte" toward a geological contact in the eastern part of the "Logan Pass" area.

Routes to this contact site would have required driving across steeper slopes than Curiosity has yet experienced on Mars, and the rover had already experienced some sideways slipping on one slope in this area.

"We decided to go back to Jocko Butte, and, in parallel, work with the scientists to identify alternate routes," Roumeliotis said.

The team spent a few days analyzing images from the rover and from NASA's Mars Reconnaissance Orbiter to choose the best route for short-term and long-term objectives.

"One factor the science team considers is how much time to spend reaching a particular target, when there are many others ahead," said Curiosity Project Scientist Ashwin Vasavada of JPL. "We used observations from NASA's Mars Reconnaissance Orbiter to identify an alternative site for investigating the geological contact in the Logan Pass area. It's a little mind-blowing to drive up a hill to a site we saw only in satellite images and then find it in front of us."