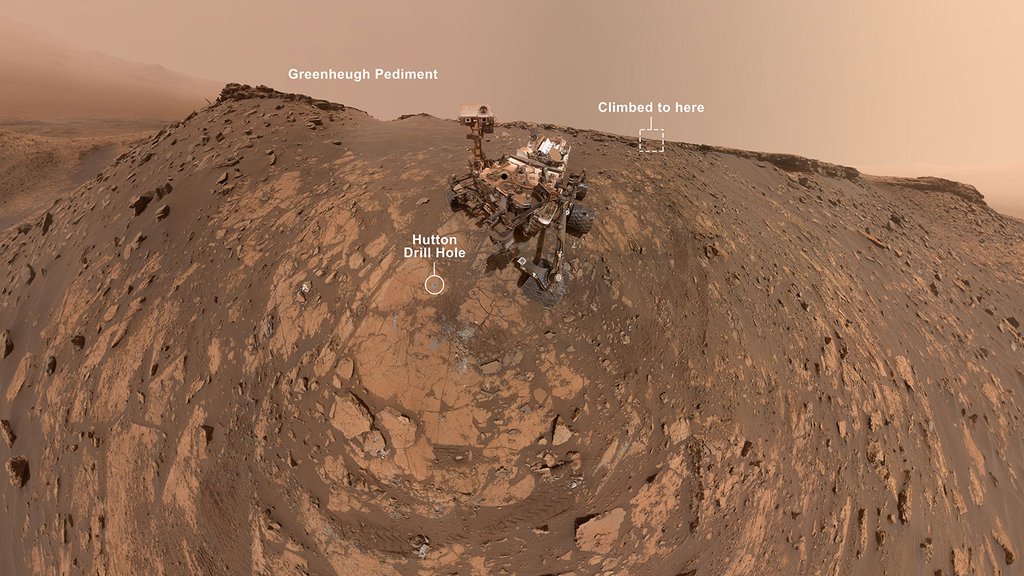 This selfie was taken by NASA's Curiosity Mars rover on Feb. 26, 2020 (the 2,687th Martian day, or sol, of the mission). The crumbling rock layer at the top of the image is "the Greenheugh Pediment," which Curiosity climbed soon after taking the image.› Full image and caption
Credit: NASA/JPL-Caltech/MSSS

Along with capturing an image before its steepest ascent ever, the robotic explorer filmed its "selfie stick," or robotic arm, in action.

NASA's Curiosity Mars rover recently set a record for the steepest terrain it's ever climbed, cresting the "Greenheugh Pediment," a broad sheet of rock that sits atop a hill. And before doing that, the rover took a selfie, capturing the scene just below Greenheugh.

In front of the rover is a hole it drilled while sampling a bedrock target called "Hutton." The entire selfie is a 360-degree panorama stitched together from 86 images relayed to Earth. The selfie captures the rover about 11 feet (3.4 meters) below the point where it climbed onto the crumbling pediment.

Curiosity finally reached the top of the slope March 6 (the 2,696th Martian day, or sol, of the mission). It took three drives to scale the hill, the second of which tilted the rover 31 degrees - the most the rover has ever tilted on Mars and just shy of the now-inactive Opportunity rover's 32-degree tilt record, set in 2016. Curiosity took the selfie on Feb. 26, 2020 (Sol 2687).

Since 2014, Curiosity has been rolling up Mount Sharp, a 3-mile-tall (5-kilometer-tall) mountain at the center of Gale Crater. Rover operators at NASA's Jet Propulsion Laboratory in Southern California carefully map out each drive to make sure Curiosity will be safe. The rover is never in danger of tilting so much that it would flip over - Curiosity's rocker-bogie wheel system enables it to tilt up to 45 degrees safely - but the steep drives do cause the wheels to spin in place.

How Are Selfies Taken?

Before the climb, Curiosity used the black-and-white Navigation Cameras located on its mast to, for the first time, record a short movie of its "selfie stick," otherwise known as its robotic arm.

Curiosity's mission is to study whether the Martian environment could have supported microbial life billions of years ago. One tool for doing that is the Mars Hand Lens Camera, or MAHLI, located in the turret at the end of the robotic arm. This camera provides a close-up view of sand grains and rock textures, similarly to how a geologist uses a handheld magnifying glass for a closer look in the field on Earth.

By rotating the turret to face the rover, the team can use MAHLI to show Curiosity. Because each MAHLI image covers only a small area, it requires many images and arm positions to fully capture the rover and its surroundings.

"We get asked so often how Curiosity takes a selfie," said Doug Ellison, a Curiosity camera operator at JPL. "We thought the best way to explain it would be to let the rover show everyone from its own point of view just how it's done."

This video shows how the robotic arm on NASA's Curiosity Mars rover moves as it takes a selfie. Credit: NASA/JPL-Caltech