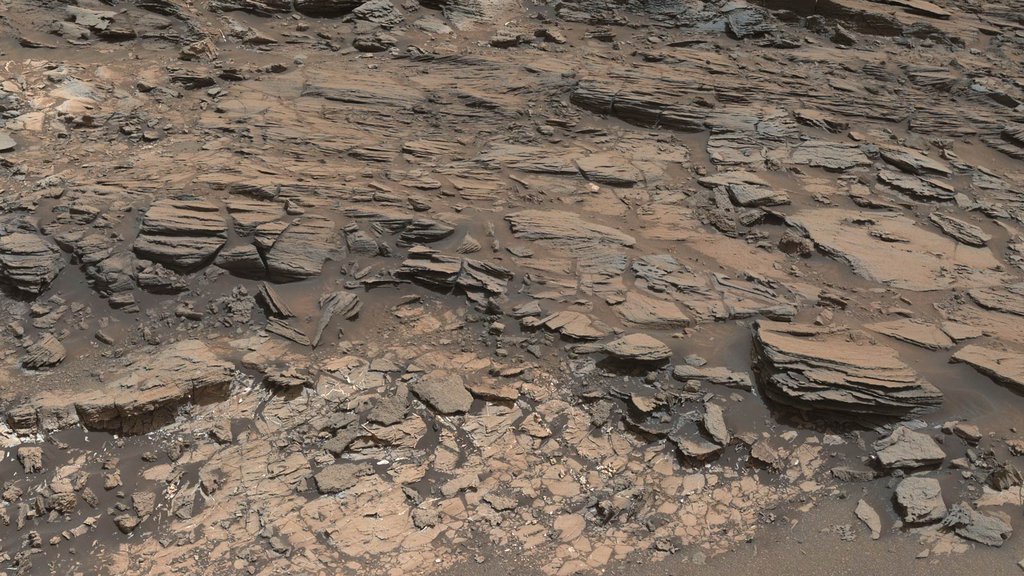 This May 25, 2015, view from the Curiosity rover's Mastcam shows a site where two different types of bedrock meet near "Marias Pass" on Mount Sharp. Pale mudstone in the foreground is like bedrock the rover studied at "Pahrump Hills." The darker sandstone above it is called the Stimson unit.› Full image and caption
Credit: NASA/JPL-Caltech/MSSS 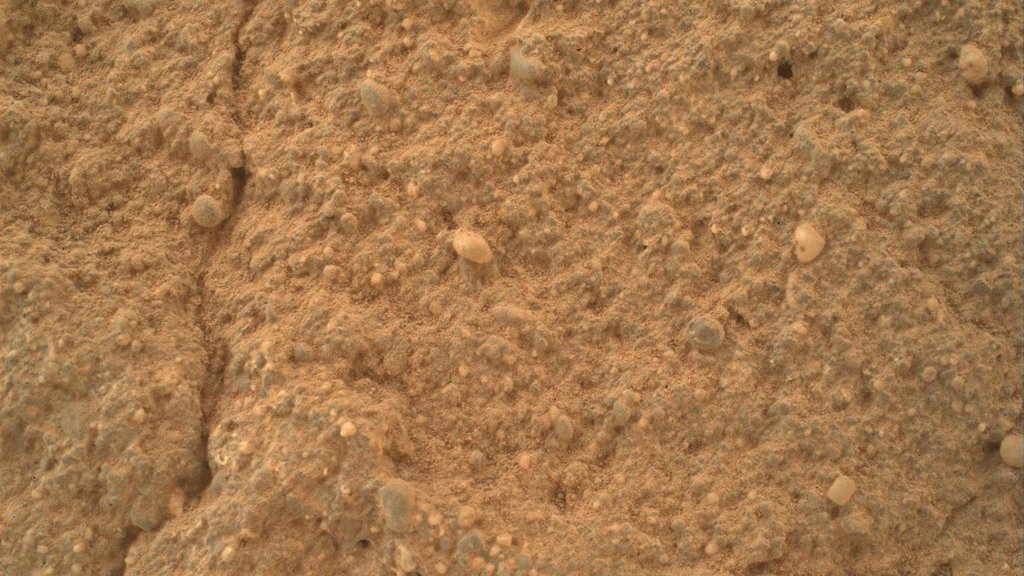 This May 29, 2015, view of a Martian sandstone target called "Big Arm" covers an area about 1.3 inches wide in detail that shows differing shapes and colors of sand grains in the stone. It is from the MAHLI camera on NASA's Curiosity rover. The site is near "Marias Pass" on Mount Sharp.› Full image and caption
Credit: NASA/JPL-Caltech/MSSS 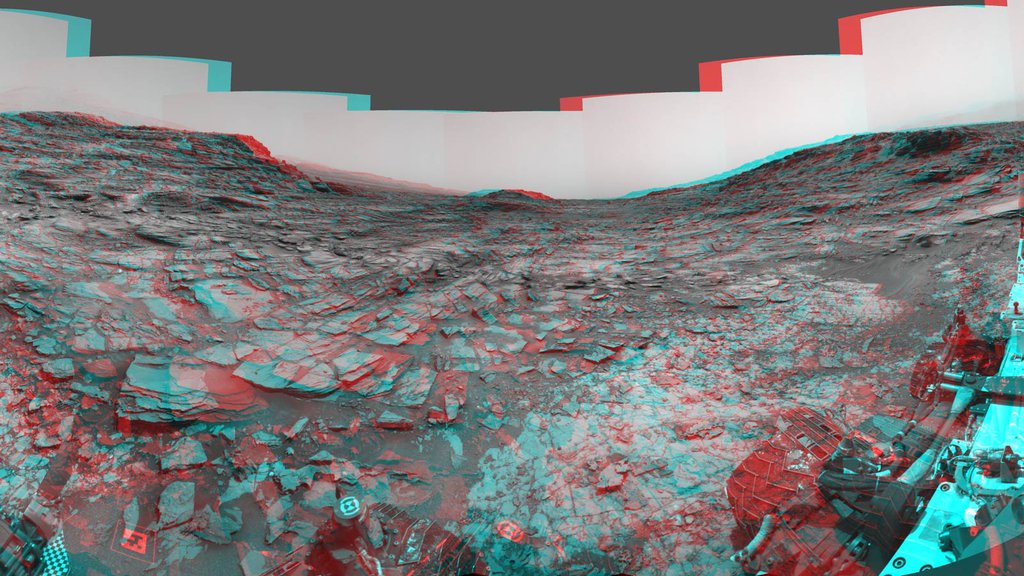 This stereo view from the Curiosity Mars rover's Navcam shows a 360-degree panorama around the site where the rover spent its 1,000th Martian day, or sol, on Mars. The image appears three-dimensional when viewed through red-blue glasses with the red lens on the left. The site is near "Marias Pass."› Full image and caption
Credit: NASA/JPL-Caltech 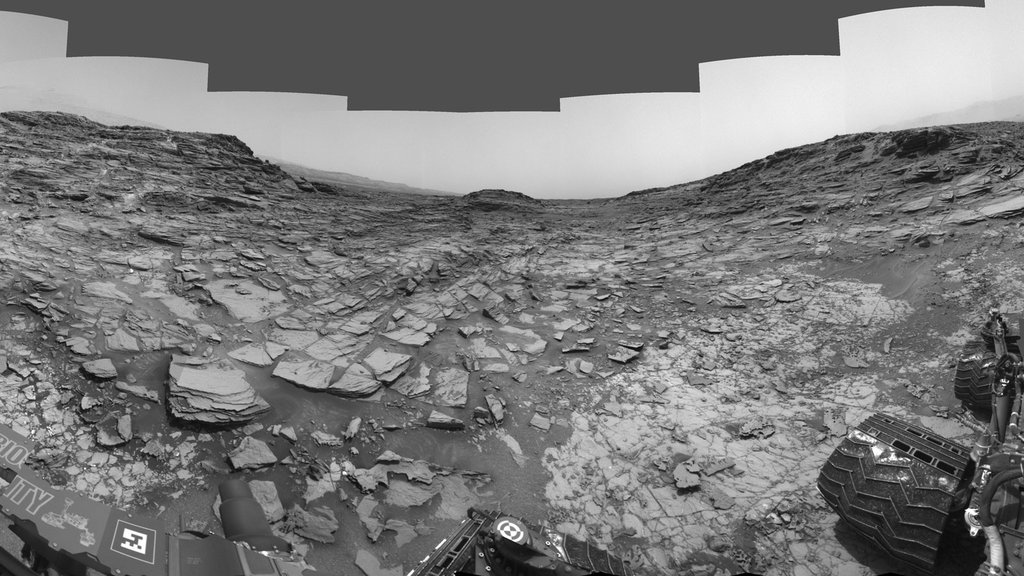 This 360-degree panorama from the Navigation Camera (Navcam) on NASA's Curiosity Mars rover shows the surroundings of a site on lower Mount Sharp where the rover spent its 1,000th Martian day, or sol, on Mars, in May 2015. The site is near "Marias Pass."› Full image and caption
Credit: NASA/JPL-Caltech

As Mars emerges from passing nearly behind the sun, NASA has resumed full operations of the Curiosity rover, which has reached a site where at least two rock types meet.

› Rover team members have resumed commanding Curiosity after a moratorium while the sun was between Earth and Mars.

› Curiosity is examing a zone where two regional rock units neighbor each other near "Marias Pass."

› The rover found a sandstone with grains of diverse size, shape and color.

NASA's Curiosity Mars rover is examining a valley where at least two types of bedrock meet, for clues about changes in ancient environmental conditions recorded by the rock.

In addition to two rock types for which this site was chosen, the rover has found a sandstone with grains of differing shapes and color.

Curiosity's international team has resumed full operations of the car-size mobile laboratory after a period of limited activity during most of June. The operations moratorium for Curiosity and other spacecraft at Mars happens about every 26 months, when Mars passes nearly behind the sun from Earth's perspective, and the sun interferes with radio communication between the two planets.

At the rover's current location near "Marias Pass" on Mount Sharp, Curiosity has found a zone where different types of bedrock neighbor each other. One is pale mudstone, like bedrock the mission examined previously at "Pahump Hills." Another is darker, finely bedded sandstone above the Pahrump-like mudstone. The rover team calls this sandstone the Stimson unit.

On Mars as on Earth, each layer of a sedimentary rock tells a story about the environment in which it was formed and modified. Contacts between adjacent layers hold particular interest as sites where changes in environmental conditions may be studied. Some contacts show smooth transitions; others are abrupt.

Curiosity climbed an incline of up to 21 degrees in late May to reach Marias Pass, guided by images from NASA's Mars Reconnaissance Orbiter showing Pahrump-like and Stimson outcrops close together.

"This site has exactly what we were looking for, and perhaps something extra," said Curiosity Project Scientist Ashwin Vasavada, of NASA's Jet Propulsion Laboratory, Pasadena, California. "Right at the contact between the Pahrump-like mudstone and the Stimson sandstone, there appears to be a thin band of coarser-grained rock that's different from either of them."

The in-between material is a sandstone that includes some larger grains, of mixed shapes and colors, compared to the overlying dark sandstone.

"The roundedness of some of the grains suggests they traveled long distances, but others are angular, perhaps meaning that they came from close by," Vasavada said. "Some grains are dark, others much lighter, which indicates that their composition varies. The grains are more diverse than in other sandstone we've examined with Curiosity."

The science team has identified rock targets for further close-up inspection of the textures and composition of the mudstone and sandstone exposed near Marias Pass. The team ancipates keeping Curiosity busy at this site for several weeks before driving higher on Mount Sharp.