NASA’s Curiosity Mars rover used its Mast Camera, or Mastcam, to take this 360-degree panorama on March 23, 2022, the 3,423th Martian day, or sol, of the mission. The team has informally described the wind-sharpened rocks seen here as “gator-back” rocks because of their scaly appearance.

To avoid patches of knife-edged rocks, the mission has taken an alternative path up Mount Sharp.

NASA’s Curiosity Mars rover spent most of March climbing the “Greenheugh Pediment” – a gentle slope capped by rubbly sandstone. The rover briefly summited this feature’s north face two years ago; now on the pediment’s southern side, Curiosity has navigated back onto the pediment to explore it more fully.

But on March 18, the mission team saw an unexpected terrain change ahead and realized they would have to turn around: The path before Curiosity was carpeted with more wind-sharpened rocks, or ventifacts, than they have ever seen in the rover’s nearly 10 years on the Red Planet.

Ventifacts chewed up Curiosity’s wheels earlier in the mission. Since then, rover engineers have found ways to slow wheel wear, including a traction control algorithm, to reduce how frequently they need to assess the wheels. And they also plan rover routes that avoid driving over such rocks, including these latest ventifacts, which are made of sandstone – the hardest type of rock Curiosity has encountered on Mars. 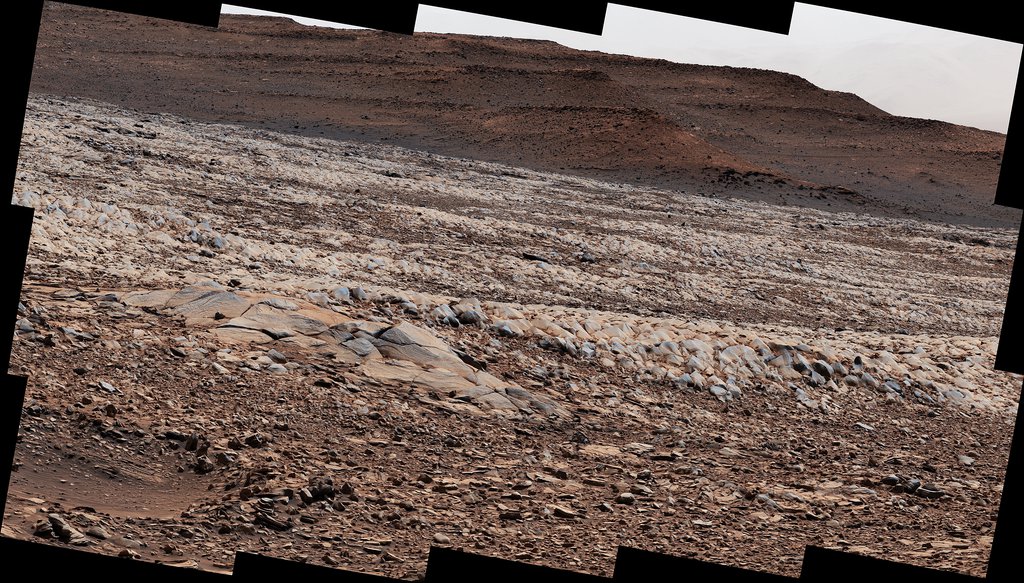 NASA’s Curiosity Mars rover used its Mast Camera, or Mastcam, to survey these wind-sharpened rocks, called ventifacts, on March 15, 2022, the 3,415th Martian day, or sol, of the mission. The team has informally described these patches of ventifacts as “gator-back” rocks because of their scaly appearance.

The team nicknamed their scalelike appearance “gator-back” terrain. Although the mission had scouted the area using orbital imagery, it took seeing these rocks close-up to reveal the ventifacts.

“It was obvious from Curiosity’s photos that this would not be good for our wheels,” said Curiosity Project Manager Megan Lin of NASA’s Jet Propulsion Laboratory in Southern California, which leads the mission. “It would be slow going, and we wouldn’t have been able to implement rover-driving best practices.”

The gator-back rocks aren’t impassable – they just wouldn’t have been worth crossing, considering how difficult the path would be and how much they would age the rover’s wheels.

So the mission is mapping out a new course for the rover as it continues to explore Mount Sharp, a 3.4-mile-tall (5.5-kilometer-tall) mountain that Curiosity has been ascending since 2014. As it climbs, Curiosity is able to study different sedimentary layers that were shaped by water billions of years ago. These layers help scientists understand whether microscopic life could have survived in the ancient Martian environment.

The Greenheugh Pediment is a broad, sloping plain near the base of Mount Sharp that extends about 1.2 miles (2 kilometers) across. Curiosity’s scientists first noticed it in orbital imagery before the rover’s landing in 2012. The pediment sticks out as a standalone feature on this part of Mount Sharp, and scientists wanted to understand how it formed.

It also sits nearby the Gediz Vallis Ridge, which may have been created as debris flowed down the mountain. Curiosity will always remain in the lower foothills of Mount Sharp, where there’s evidence of ancient water and environments that would have been habitable in the past. Driving across about a mile (1.5 kilometers) of the pediment to gather images of Gediz Vallis Ridge would have been a way to study material from the mountain’s uppermost reaches.

“From a distance, we can see car-sized boulders that were transported down from higher levels of Mount Sharp – maybe by water relatively late in Mars’ wet era,” said Ashwin Vasavada, Curiosity’s project scientist at JPL. “We don’t really know what they are, so we wanted to see them up close.”

Over the next couple weeks, Curiosity will climb down from the pediment to a place it had previously been exploring: a transition zone between a clay-rich area and one with larger amounts of salt minerals called sulfates. The clay minerals formed when the mountain was wetter, dappled with streams and ponds; the salts may have formed as Mars’ climate dried out over time.

“It was really cool to see rocks that preserved a time when lakes were drying up and being replaced by streams and dry sand dunes,” said Abigail Fraeman, Curiosity’s deputy project scientist at JPL. “I’m really curious to see what we find as we continue to climb on this alternate route.”

Curiosity’s wheels will be on safer ground as it leaves the gator-back terrain behind, but engineers are focused on other signs of wear on the rover’s robotic arm, which carries its rock drill. Braking mechanisms on two of the arm’s joints have stopped working in the past year. However, each joint has redundant parts to ensure the arm can keep drilling rock samples. The team is studying the best ways to use the arm to ensure these redundant parts keep working as long as possible.