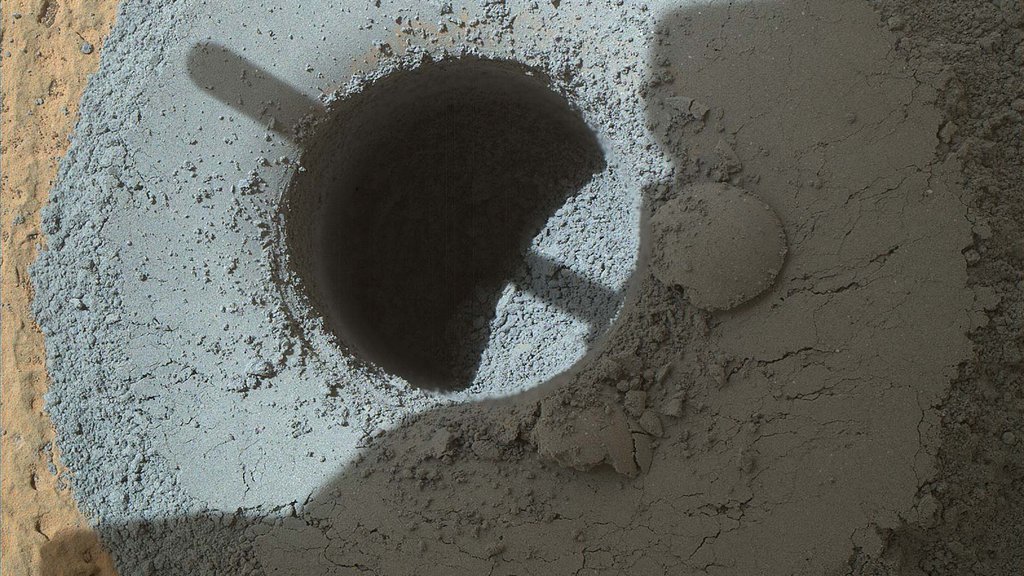 This hole, with a diameter slightly smaller than a U.S. dime, was drilled by NASA's Curiosity Mars rover into a rock target called "Telegraph Peak."› Full image and caption
Credit: NASA/JPL-Caltech/MSSS

Sample-collection drilling that NASA's Curiosity Mars rover completed Tuesday will likely be the last before the rover departs "Pahrump Hills."

-- Mission heading through "Artist's Drive" and higher on Mount Sharp

NASA's Curiosity Mars rover used its drill on Tuesday, Feb. 24 to collect sample powder from inside a rock target called "Telegraph Peak." The target sits in the upper portion of "Pahrump Hills," an outcrop the mission has been investigating for five months.

The Pahrump Hills campaign previously drilled at two other sites. The outcrop is an exposure of bedrock that forms the basal layer of Mount Sharp. Curiosity's extended mission, which began last year after a two-year prime mission, is examing layers of this mountain that are expected to hold records of how ancient wet environments on Mars evolved into drier environments.

The rover team is planning to drive Curiosity away from Pahrump Hills in coming days, exiting through a narrow valley called "Artist's Drive," which will lead the rover along a strategically planned route higher on the basal layer of Mount Sharp.

The Telegraph Peak site was selected after the team discussed the large set of physical and chemical measurements acquired throughout the campaign. In particular, measurements of the chemistry of the Telegraph Peak site, using the Alpha Particle X-ray Spectrometer (APXS) on the rover's arm, motivated selection of this target for drilling before the departure from Pahrump Hills.

Compared to the chemistry of rocks and soils that Curiosity assessed before reaching Mount Sharp, the rocks of Pahrump Hills are relatively enriched in the element silicon in proportion to the amounts of the elements aluminum and magnesium. The latest drilling site exhibits that characteristic even more strongly than the earlier two, which were lower in the outcrop.

"When you graph the ratios of silica to magnesium and silica to aluminum, 'Telegraph Peak' is toward the end of the range we've seen," said Curiosity co-investigator Doug Ming, of NASA Johnson Space Center, Houston. "It's what you would expect if there has been some acidic leaching. We want to see what minerals are present where we found this chemistry."

The rock-powder sample from Telegraph Peak goes to the rover's internal Chemistry and Mineralogy (CheMin) instrument for identification of the minerals. After that analysis, the team may also choose to deliver sample material to Curiosity's Sample Analysis at Mars (SAM) suite of laboratory instruments.

The sample-collection drilling at Telegraph Peak was the first in Curiosity's 30 months on Mars to be conducted without a preliminary "mini drill" test of the rock's suitability for drilling. The team judged full-depth drilling to be safe for the drill based on similarities of the target to the previous Pahrump Hills targets. The rover used a low-percussion-level drilling technique that it first used on the previous drilling target, "Mojave 2."

Curiosity reached the base of Mount Sharp after two years of examining other sites inside Gale Crater and driving toward the mountain at the crater's center.