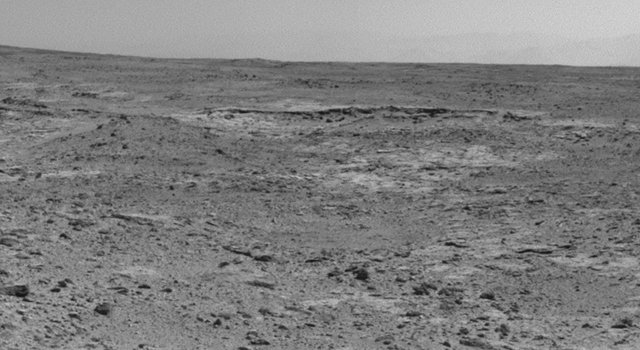 The low ridge that appears as a dark band below the horizon in the center of this scene is a Martian outcrop called "Cooperstown," a possible site for contact inspection with tools on the robotic arm of NASA's Mars rover Curiosity. The ridge extends roughly 100 feet (about 30 meters) from left to right, and it is about 260 feet (about 80 meters) away from the location from which Curiosity captured this view. › Full image and caption

NASA's Curiosity Mars rover has batted 1,000 with its new technique for covering ground faster -- two-day drives, reaching a viewpoint for choosing its next target.

NASA's Mars rover Curiosity completed its first two-day autonomous drive Monday, bringing the mobile laboratory to a good vantage point for pictures useful in selecting the next target the rover will reach out and touch.

When it drives autonomously, the rover chooses a safe route to designated waypoints by using its onboard computer to analyze stereo images that it takes during pauses in the drive. Prior to Monday, each day's autonomous drive came after a segment earlier that day that was exactly charted by rover team members using images sent to Earth. The Sunday-Monday drive was the first time Curiosity ended an autonomous driving segment, then continued autonomously from that same point the next day.

The drives brought Curiosity to about 262 feet (about 80 meters) from "Cooperstown," an outcrop bearing candidate targets for examination with instruments on the rover's arm. The moniker, appropriate for baseball season, comes from a named rock deposit in New York. Curiosity has not used its arm-mounted instruments to examine a target since departing an outcrop called "Darwin" on Sept. 22. Researchers used the arm's camera and spectrometer for four days at Darwin; they plan to use them on just one day at Cooperstown.

Starting to use two-day autonomous driving and the shorter duration planned for examining Cooperstown serve to accelerate Curiosity's progress toward the mission's main destination: Mount Sharp.

In July, Curiosity began a trek of about 5.3 miles (8.6 kilometers), starting from the area where it worked for the first half of 2013, headed to an entry point to Mount Sharp. Cooperstown is about one-third of the way along the route. The team used images from NASA's Mars Reconnaissance Orbiter to plot the route and choose a few points of potential special interest along the way, including Darwin and Cooperstown.

"What interests us about this site is an intriguing outcrop of layered material visible in the orbital images," said Kevin Lewis of Princeton University, Princeton, N.J., a participating scientist for the mission who has been a leader in planning the Cooperstown activities. "We want to see how the local layered outcrop at Cooperstown may help us relate the geology of Yellowknife Bay to the geology of Mount Sharp."

The team is using images taken from the vantage point reached on Monday to decide what part of the Cooperstown outcrop to investigate with the arm-mounted instruments.

The first day of the two-day drive began Sunday with about 180 feet (55 meters) on a southwestward path that rover drivers at NASA's Jet Propulsion Laboratory, Pasadena, Calif., evaluated ahead of time as safe. The autonomous-driving portion began where that left off, with Curiosity evaluating the best way to reach designated waypoints ahead. The vehicle drove about 125 feet (38 meters) autonomously on Sunday.

"We needed to store some key variables in the rover's non-volatile memory for the next day," said JPL rover driver John Wright. Curiosity's volatile memory is cleared when the rover goes into energy-conserving sleep mode overnight.

The stored variables included what direction the rover was driving when it ended the first day's drive, and whether it had classified the next 10 feet (3 meters) in that direction as safe for driving. When it began its second day of driving, Curiosity resumed evaluating the terrain ahead for safe driving and drove 105 feet (32 meters), all autonomously.

This new capability enables driving extra days during multi-day activity plans that the rover team develops on Fridays and before holidays.

A key activity planned for the week of Nov. 4 is uploading a new version of onboard software -- the third such upgrade since landing. These upgrades allow continued advances in the rover's capabilities. The version prepared for upload next week includes, for example, improvements in what information the rover can store overnight to resume autonomous driving the next day. It also expands capabilities for using the robotic arm while parked on slopes. The team expects that to be crucial for investigations on Mount Sharp.