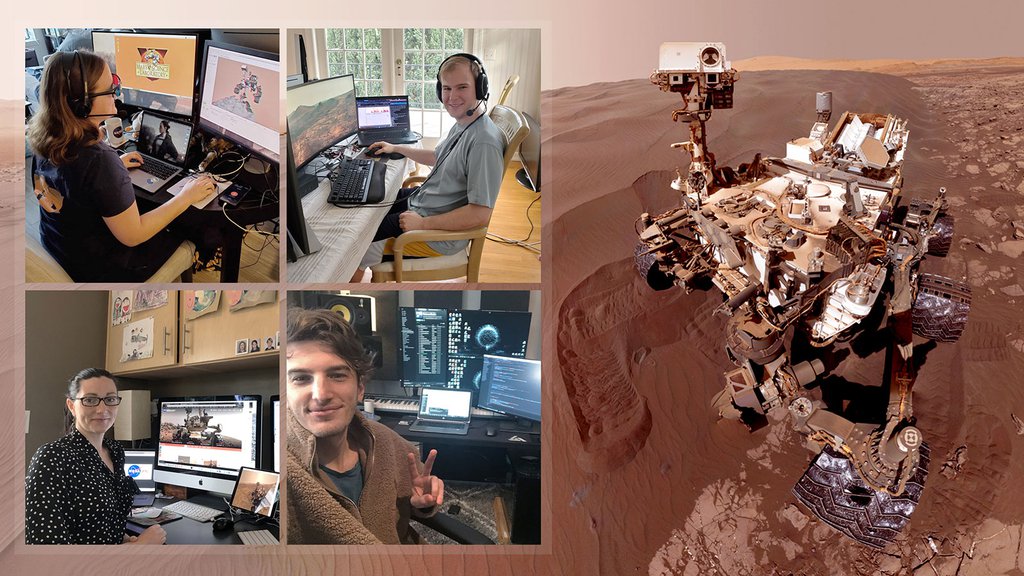 The Mars mission has learned to meet new challenges while working remotely.

For people who are able to work remotely during this time of social distancing, video conferences and emails have helped bridge the gap. The same holds true for the team behind NASA's Curiosity Mars rover. They're dealing with the same challenges of so many remote workers - quieting the dog, sharing space with partners and family, remembering to step away from the desk from time to time - but with a twist: They're operating on Mars.

On March 20, 2020, nobody on the team was present at NASA's Jet Propulsion Laboratory in Southern California, where the mission is based. It was the first time the rover's operations were planned while the team was completely remote. Two days later, the commands they had sent to Mars executed as expected, resulting in Curiosity drilling a rock sample at a location called "Edinburgh."

The team began to anticipate the need to go fully remote a couple weeks before, leading them to rethink how they would operate. Headsets, monitors and other equipment were distributed (picked up curbside, with all employees following proper social-distancing measures).

Not everything they're used to working with at JPL could be sent home, however: Planners rely on 3D images from Mars and usually study them through special goggles that rapidly shift between left- and right-eye views to better reveal the contours of the landscape. That helps them figure out where to drive Curiosity and how far they can extend its robotic arm.

But those goggles require the advanced graphics cards in high-performance computers at JPL (they're actually gaming computers repurposed for driving on Mars). In order for rover operators to view 3D images on ordinary laptops, they've switched to simple red-blue 3D glasses. Although not as immersive or comfortable as the goggles, they work just as well for planning drives and arm movements.

The team ran through several tests and one full practice run before it was time to plan the "Edinburgh" drilling operation.

What It Takes to Drive a Rover

Of course, hardware is only part of the equation: A great deal of logistical adjustments are required as well. Typically, team members at JPL work with hundreds of scientists at research institutions around the world to decide where to drive Curiosity and how to gather its science. Working at a remove from those scientists is not new. But working apart from other people who are usually based at JPL is.

Programming each sequence of actions for the rover may involve 20 or so people developing and testing commands in one place while chatting with dozens of others located elsewhere.

"We're usually all in one room, sharing screens, images and data. People are talking in small groups and to each other from across the room," said Alicia Allbaugh, who leads the team.

Now they do the same job by holding several video conferences at once while also relying more on messaging apps. It takes extra effort to make sure everybody understands one another; on average, each day's planning takes one or two more hours than it normally would. That adds some limits to how many commands are sent each day. But for the most part, Curiosity is as scientifically productive as ever.

To make sure everyone is being heard and understands one another, science operations team chief Carrie Bridge proactively talks to the scientists and engineers to close any communication gaps: Does anyone see issues with the current plan? Does the solution the engineers are converging around work for the scientists?

"I probably monitor about 15 chat channels at all times," she said. "You're juggling more than you normally would."

Typically, Bridge would make her rounds to several groups working in a kind of situation room where Curiosity's data and images are viewed and commands are generated. Now she calls into as many as four separate videoconferences at the same time to check in.

"I still do my normal routine, but virtually," she said.

The transition has taken getting used to, but Bridge said the effort to keep Curiosity rolling is representative of the can-do spirit that attracted her to NASA.

"It's classic, textbook NASA," she said. "We're presented with a problem and we figure out how to make things work. Mars isn't standing still for us; we're still exploring."