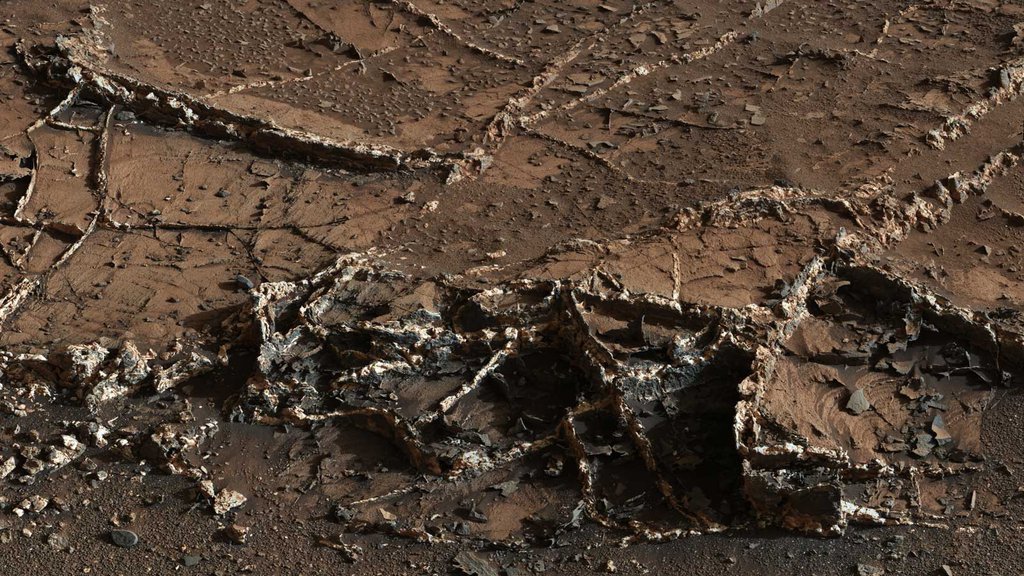 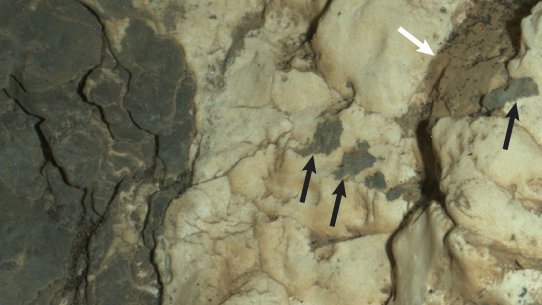 This view from the Mars Hand Lens Imager on the arm of NASA's Curiosity Mars rover is a close-up of a two-tone mineral vein at a site called "Garden City" on lower Mount Sharp. It was taken during night, illuminated by LEDs, on March 25, 2015.› Full image and caption

Two-tone mineral veins at a site NASA's Curiosity rover has reached by climbing a layered Martian mountain offer clues about multiple episodes of fluid movement. These episodes occurred later than the wet environmental conditions that formed lake-bed deposits the rover examined at the mountain's base.

Curiosity has analyzed rock samples drilled from three targets lower on the mountain in the past seven months. It found a different mineral composition at each, including a silica mineral named cristobalite in the most recent sample. These differences, together with the prominent veins seen in images taken a little farther uphill, illustrate how the layers of Mount Sharp provide a record of different stages in the evolution of the area's ancient environment.

The two-tone veins are at the site called "Garden City." They appear as a network of ridges left standing above the now eroded-away bedrock in which they formed. Individual ridges range up to about 2.5 inches (6 centimeters) high and half that in width, and they bear both bright and dark material.

"Some of them look like ice-cream sandwiches: dark on both edges and white in the middle," said Linda Kah, a Curiosity science-team member at the University of Tennessee, Knoxville. "These materials tell us about secondary fluids that were transported through the region after the host rock formed."

Veins such as these form where fluids move through cracked rock and deposit minerals in the fractures, often affecting the chemistry of the rock surrounding the fractures. Curiosity has found bright veins composed of calcium sulfate at several previous locations. The dark material preserved here presents an opportunity to learn more. Kah said, "At least two secondary fluids have left evidence here. We want to understand the chemistry of the different fluids that were here and the sequence of events. How have later fluids affected the host rock?"

Some of the sequence is understood: Mud that formed lake-bed mudstones Curiosity examined near its 2012 landing site and after reaching Mount Sharp must have dried and hardened before the fractures formed. The dark material that lines the fracture walls reflects an earlier episode of fluid flow than the white, calcium-sulfate-rich veins do, although both flows occurred after the cracks formed.

Garden City is about 39 feet (12 meters) higher than the bottom edge of the "Pahrump Hills" outcrop of the bedrock forming the basal layer of Mount Sharp, at the center of Mars' Gale Crater. The Curiosity mission spent about six months examining the first 33 feet (10 meters) of elevation at Pahrump Hills, climbing from the lower edge to higher sections three times to vertically profile the rock structures and chemistry, and to select the best targets for drilling.

"We investigated Pahrump Hills the way a field geologist would, looking over the whole outcrop first to choose the best samples to collect, and it paid off," said David Blake of NASA's Ames Research Center, Moffett Field, California, principal investigator for the Chemistry and Mineralogy (CheMin) analytical laboratory instrument inside the rover.

Analysis is still preliminary, but the three drilled samples from Pahrump Hills have clear differences in mineral ingredients. The first, "Confidence Hills," had the most clay minerals and hematite, both of which commonly form under wet conditions. The second, "Mojave," had the most jarosite, an oxidized mineral containing iron and sulfur that forms in acidic conditions. The third is "Telegraph Peak." Examination of Garden City has not included drilling a sample.

Blake said, "Telegraph Peak has almost no evidence of clay minerals, the hematite is nearly gone and jarosite abundance is down. The big thing about this sample is the huge amount of cristobalite, at about 10 percent or more of the crystalline material." Cristobalite is a mineral form of silica. The sample also contains a small amount of quartz, another form of silica. Among the possibilities are that some process removed other ingredients, leaving an enrichment of silica behind; or that dissolved silica was delivered by fluid transport; or that the cristobalite formed elsewhere and was deposited with the original sediment.

NASA's Mars Science Laboratory Project is using Curiosity to examine environments that offered favorable conditions for microbial life on ancient Mars, if the planet ever has hosted microbes, and the changes from those environments to drier conditions that have prevailed on Mars for more than three billion years.

After investigations in the Telegraph Peak area, the rover team plans to drive Curiosity through a valley called "Artist's Drive" to reach higher layers. Engineers are meanwhile developing guidelines for best use of the rover's drill, following detection of a transient short circuit last month while using the tool's percussion action to shake rock powder into a sample-processing device. Drilling can use both rotary and percussion actions.

"We expect to use percussion as part of drilling in the future while we monitor whether shorts become more frequent," said Steve Lee of NASA's Jet Propulsion Laboratory, Pasadena, California. Lee became deputy project manager for the Mars Science Laboratory Project this month. He previously led the project's Guidance, Navigation and Control Team from design through landing.