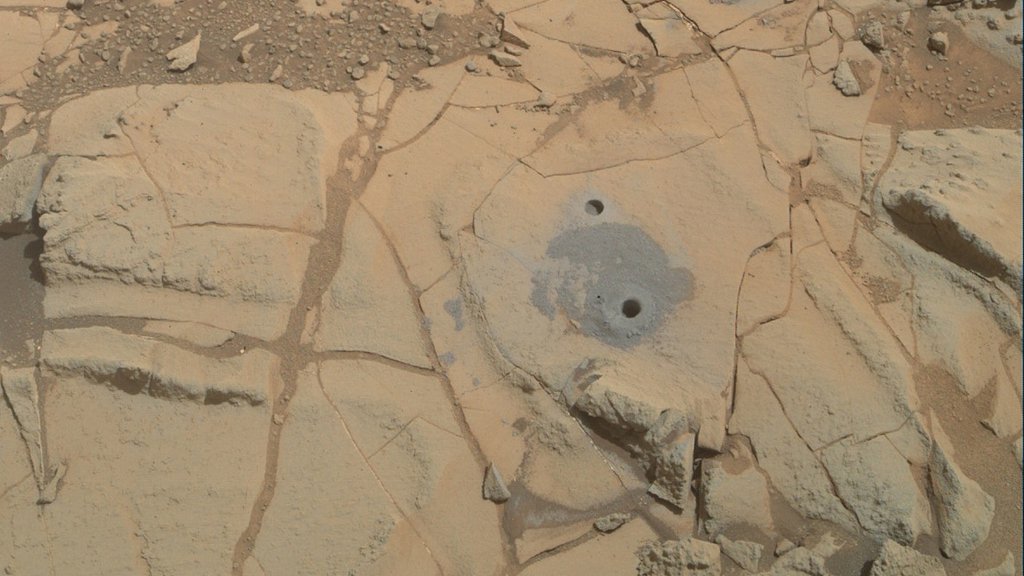 Gray cuttings from Curiosity's drilling into a target called "Mojave 2" are visible surrounding the sample-collection hole in this Jan. 31, 2015, image from the rover's MAHLI camera. This site in the "Pahrump Hills" outcrop provided the mission's second drilled sample of Mars' Mount Sharp.› Full image and caption
Credit: NASA/JPL-Caltech/MSSS |

NASA's Curiosity Mars rover is analyzing a rock-powder sample collected by using the rover's drill in a gentler manner than at previous drill targets.

The second bite of a Martian mountain taken by NASA's Curiosity Mars rover hints at long-ago effects of water that was more acidic than any evidenced in the rover's first taste of Mount Sharp, a layered rock record of ancient Martian environments.

Curiosity reached the base of Mount Sharp five months ago after two years of examining other sites inside Gale Crater and driving toward the mountain at the crater's center. The first sample of the mountain's base layer came from a target called "Confidence Hills," drilled in September.

A preliminary check of the minerals in the Mojave 2 sample comes from analyzing it with the Chemistry and Mineralogy (CheMin) instrument inside Curiosity. The still-partial analysis shows a significant amount of jarosite, an oxidized mineral containing iron and sulfur that forms in acidic environments.

"Our initial assessment of the newest sample indicates that it has much more jarosite than Confidence Hills," said CheMin Deputy Principal Investigator David Vaniman, of the Planetary Science Institute, Tucson, Arizona. The minerals in Confidence Hills indicate less acidic conditions of formation.

Open questions include whether the more acidic water evident at Mojave 2 was part of environmental conditions when sediments building the mountain were first deposited, or fluid that soaked the site later.

Both target sites lie in a outcrop called "Pahrump Hills," an exposure of the Murray formation that is the basal geological unit of Mount Sharp. The Curiosity mission team has already proposed a hypothesis that this mountain, the size of Mount Rainier in Washington, began as sediments deposited in a series of lakes filling and drying.

In the months between Curiosity's drilling of these two targets, the rover team based at NASA's Jet Propulsion Laboratory, Pasadena, California, directed the vehicle through an intensive campaign at Pahrump Hills. The one-ton roving laboratory zig-zagged up and down the outcrop's slope, using cameras and spectrometer instruments to study features of interest at increasing levels of detail. One goal was to select which targets, if any, to drill for samples to be delivered into the rover's internal analytical instruments.

The team chose a target called "Mojave," largely due to an abundance of slender features, slightly smaller than rice grains, visible on the rock surface. Researchers sought to determine whether these are salt-mineral crystals, such as those that could result from evaporation of a drying lake, or if they have some other composition. In a preparatory drilling test of the Mojave target, the rock broke. This ruled out sample-collection drilling at that spot, but produced chunks with freshly exposed surfaces to be examined.

Mojave 2, an alternative drilling target selected at the Mojave site, has the same type of crystal-shaped features. The preliminary look at CheMin data from the drilled sample material did not identify a clear candidate mineral for these features. Possibly, minerals that originally formed the crystals may have been replaced by other minerals during later periods of wet environmental conditions.

The drilling to collect Mojave 2 sample material might not have succeeded if the rover team had not recently expanded its options for operating the drill.

"This was our first use of low-percussion drilling on Mars, designed to reduce the energy we impart to the rock," said JPL's John Michael Morookian, the team's surface science and sampling activity lead for the Pahrump Hills campaign. "Curiosity's drill is essentially a hammer and chisel, and this gives us a way not to hammer as hard."

Extensive tests on Earth validated the technique after the team became concerned about fragility of some finely layered rocks near the base of Mount Sharp.

The rover's drill has six percussion-level settings ranging nearly 20-fold in energy, from tapping gently to banging vigorously, all at 30 times per second. The drill monitors how rapidly or slowly it is penetrating the rock and autonomously adjusts its percussion level. At the four targets before Mojave 2 -- including three before Curiosity reached Mount Sharp -- sample-collection drilling began at level four and used an algorithm that tended to remain at that level. The new algorithm starts at level one, then shifts to a higher level only if drilling progress is too slow. The Mojave 2 rock is so soft, the drill reached its full depth of about 2.6 inches (6.5 centimeters) in 10 minutes using just levels one and two of percussion energy.

Curiosity has also delivered Mojave 2 powder to the internal Sample Analysis at Mars (SAM) suite of instruments, for chemical analysis. The rover may drive to one or more additional sampling sites at Pahrump Hills before heading higher on Mount Sharp.