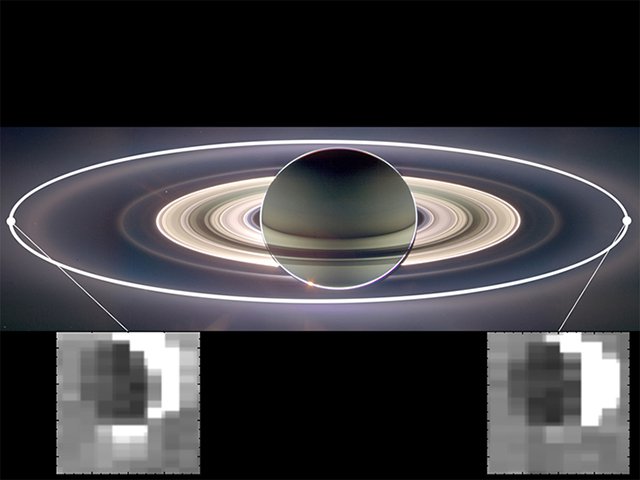 This set of images from NASA's Cassini mission shows how the gravitational pull of Saturn affects the amount of spray coming from jets at the active moon Enceladus. Enceladus has the most spray when it is farthest away from Saturn in its orbit (inset image on the left) and the least spray when it is closest to Saturn (inset image on the right).› Full image and caption
Credit: NASA/JPL-Caltech/University of Arizona/Cornell/SSI 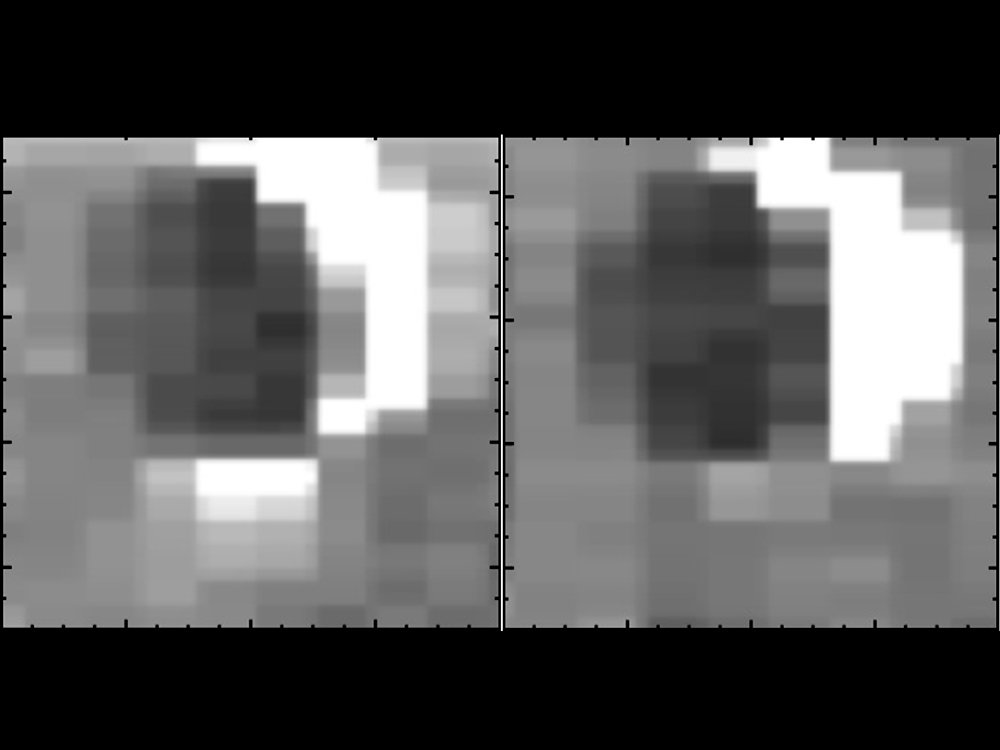 This set of images from NASA's Cassini mission shows the difference in the amount of spray emanating from Saturn's moon Enceladus. The images from Cassini's visual and infrared mapping spectrometer show that Enceladus sprays the most when it is farthest away from Saturn in its orbit (left) and sprays the least when it is closest to Saturn (right).› Full image and caption
Credit: NASA/JPL-Caltech/University of Arizona/Cornell 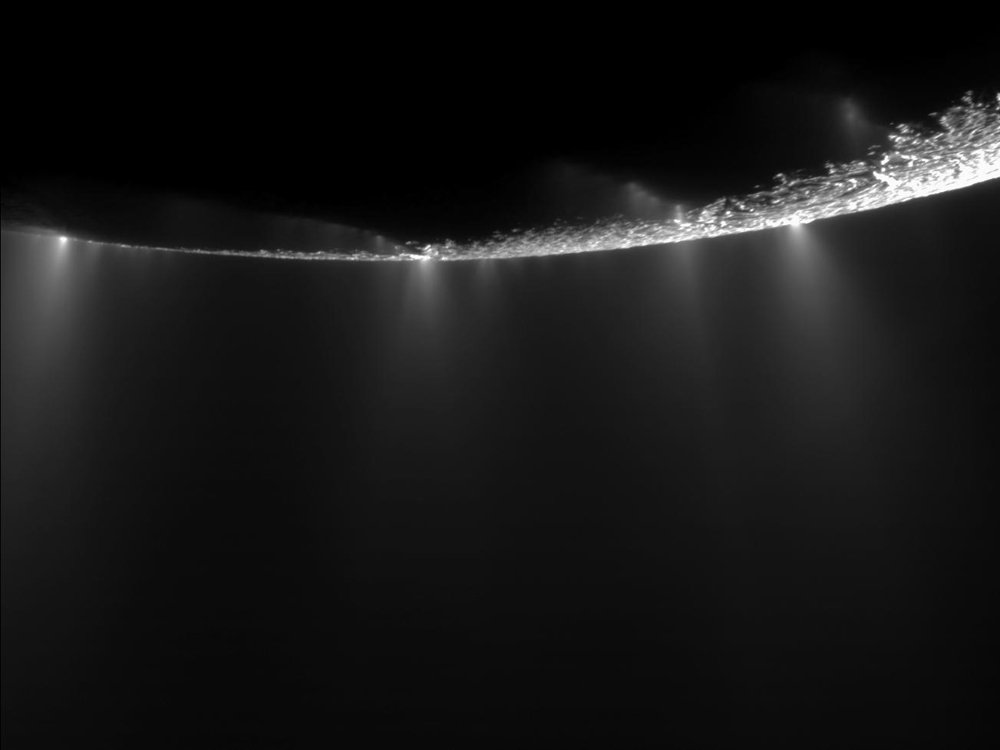 Dramatic plumes, both large and small, spray water ice out from many locations along the famed "tiger stripes" near the south pole of Saturn's moon Enceladus. The tiger stripes are fissures that spray icy particles, water vapor and organic compounds.› Full image and caption
Credit: NASA/JPL/Space Science Institute 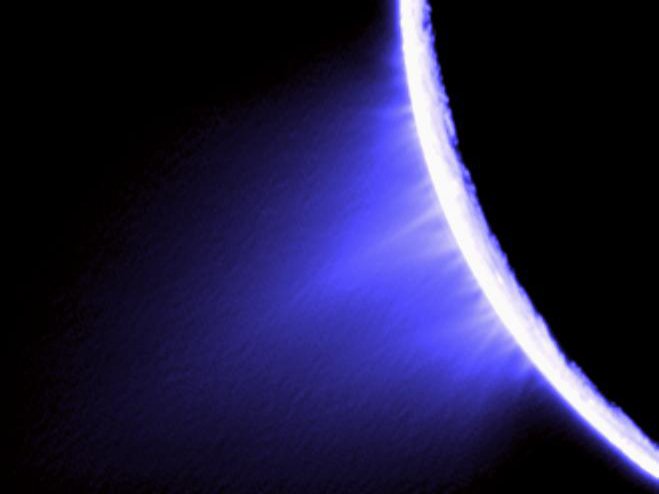 The intensity of jets of water ice and organic particles that shoot out from Enceladus depends on the moon's proximity to Saturn, according to NASA's Cassini spacecraft data.

PASADENA, Calif. -- The intensity of the jets of water ice and organic particles that shoot out from Saturn's moon Enceladus depends on the moon's proximity to the ringed planet, according to data obtained by NASA's Cassini spacecraft.

The finding adds to evidence that a liquid water reservoir or ocean lurks under the icy surface of the moon. This is the first clear observation the bright plume emanating from Enceladus' south pole varies predictably. The findings are detailed in a scientific paper in this week's edition of Nature.

"The jets of Enceladus apparently work like adjustable garden hose nozzles," said Matt Hedman, the paper's lead author and a Cassini team scientist based at Cornell University in Ithaca, N.Y. "The nozzles are almost closed when Enceladus is closer to Saturn and are most open when the moon is farthest away. We think this has to do with how Saturn squeezes and releases the moon with its gravity."

Cassini, which has been orbiting Saturn since 2004, discovered the jets that form the plume in 2005. The water ice and organic particles spray out from several narrow fissures nicknamed "tiger stripes."

"The way the jets react so responsively to changing stresses on Enceladus suggests they have their origins in a large body of liquid water," said Christophe Sotin, a co-author and Cassini team member at NASA's Jet Propulsion Laboratory in Pasadena, Calif. "Liquid water was key to the development of life on Earth, so these discoveries whet the appetite to know whether life exists everywhere water is present."

For years scientists hypothesized the intensity of the jets likely varied over time, but no one had been able to show they changed in a recognizable pattern. Hedman and colleagues were able to see the changes by examining infrared data of the plume as a whole, obtained by Cassini's visual and infrared mapping spectrometer (VIMS), and looking at data gathered over a long period of time.

The VIMS instrument, which enables the analysis of a wide range of data including the hydrocarbon composition of the surface of another Saturnian moon, Titan, and the seismological signs of Saturn's vibrations in its rings, collected more than 200 images of the Enceladus plume from 2005 to 2012.

These data show the plume was dimmest when the moon was at the closest point in its orbit to Saturn. The plume gradually brightened until Enceladus was at the most distant point, where it was three to four times brighter than the dimmest detection. This is comparable to moving from a dim hallway into a brightly lit office.

Adding the brightness data to previous models of how Saturn squeezes Enceladus, the scientists deduced the stronger gravitational squeeze near the planet reduces the opening of the tiger stripes and the amount of material spraying out. They think the relaxing of Saturn's gravity farther away from planet allows the tiger stripes to be more open and for the spray to escape in larger quantities.

"Cassini's time at Saturn has shown us how active and kaleidoscopic this planet, its rings and its moons are," said Linda Spilker, Cassini project scientist at JPL. "We've come a long way from the placid-looking Saturn that Galileo first spied through his telescope. We hope to learn more about the forces at work here as a microcosm for how our solar system formed."