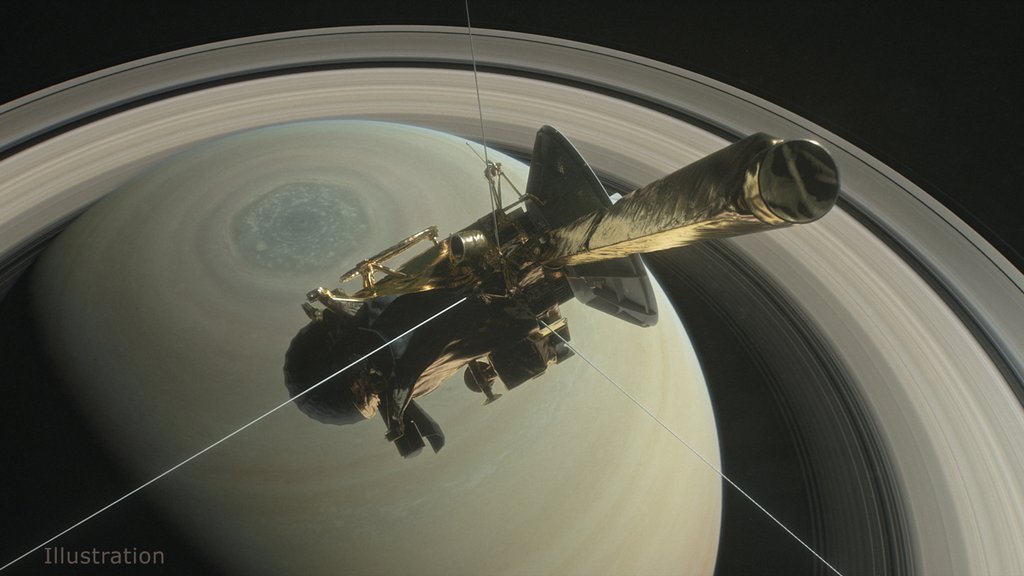 This illustration shows Cassini above Saturn's northern hemisphere prior to one of its 22 Grand Finale dives.› Full image and caption
Credit: NASA/JPL-Caltech

NASA's Cassini spacecraft, in orbit around Saturn since 2004, is about to begin the final chapter of its remarkable story.

NASA's Cassini spacecraft, in orbit around Saturn since 2004, is about to begin the final chapter of its remarkable story. On Wednesday, April 26, the spacecraft will make the first in a series of dives through the 1,500-mile-wide (2,400-kilometer) gap between Saturn and its rings as part of the mission's grand finale.

"No spacecraft has ever gone through the unique region that we'll attempt to boldly cross 22 times," said Thomas Zurbuchen, associate administrator for the Science Mission Directorate at NASA Headquarters in Washington. "What we learn from Cassini's daring final orbits will further our understanding of how giant planets, and planetary systems everywhere, form and evolve. This is truly discovery in action to the very end."

During its time at Saturn, Cassini has made numerous dramatic discoveries, including a global ocean that showed indications of hydrothermal activity within the icy moon Enceladus, and liquid methane seas on its moon Titan.

Now 20 years since launching from Earth, and after 13 years orbiting the ringed planet, Cassini is running low on fuel. In 2010, NASA decided to end the mission with a purposeful plunge into Saturn this year in order to protect and preserve the planet's moons for future exploration -- especially the potentially habitable Enceladus.

But the beginning of the end for Cassini is, in many ways, like a whole new mission. Using expertise gained over the mission's many years, Cassini engineers designed a flight plan that will maximize the scientific value of sending the spacecraft toward its fateful plunge into the planet on Sept. 15. As it ticks off its terminal orbits during the next five months, the mission will rack up an impressive list of scientific achievements.

"This planned conclusion for Cassini's journey was far and away the preferred choice for the mission's scientists," said Linda Spilker, Cassini project scientist at NASA's Jet Propulsion Laboratory in Pasadena, California. "Cassini will make some of its most extraordinary observations at the end of its long life."

The mission team hopes to gain powerful insights into the planet's internal structure and the origins of the rings, obtain the first-ever sampling of Saturn's atmosphere and particles coming from the main rings, and capture the closest-ever views of Saturn's clouds and inner rings. The team currently is making final checks on the list of commands the robotic probe will follow to carry out its science observations, called a sequence, as it begins the finale. That sequence is scheduled to be uploaded to the spacecraft on Tuesday, April 11.

Cassini will transition to its grand finale orbits, with a last close flyby of Saturn's giant moon Titan, on Saturday, April 22. As it has many times over the course of the mission, Titan's gravity will bend Cassini's flight path. Cassini's orbit then will shrink so that instead of making its closest approach to Saturn just outside the rings, it will begin passing between the planet and the inner edge of its rings.

"Based on our best models, we expect the gap to be clear of particles large enough to damage the spacecraft. But we're also being cautious by using our large antenna as a shield on the first pass, as we determine whether it's safe to expose the science instruments to that environment on future passes," said Earl Maize, Cassini project manager at JPL. "Certainly there are some unknowns, but that's one of the reasons we're doing this kind of daring exploration at the end of the mission."

In mid-September, following a distant encounter with Titan, the spacecraft's path will be bent so that it dives into the planet. When Cassini makes its final plunge into Saturn's atmosphere on Sept. 15, it will send data from several instruments - most notably, data on the atmosphere's composition -- until its signal is lost.

"Cassini's grand finale is so much more than a final plunge," said Spilker. "It's a thrilling final chapter for our intrepid spacecraft, and so scientifically rich that it was the clear and obvious choice for how to end the mission."

Resources on Cassini's grand finale, including images and video, are available at:

An animated video about Cassini's Grand Finale is available at: