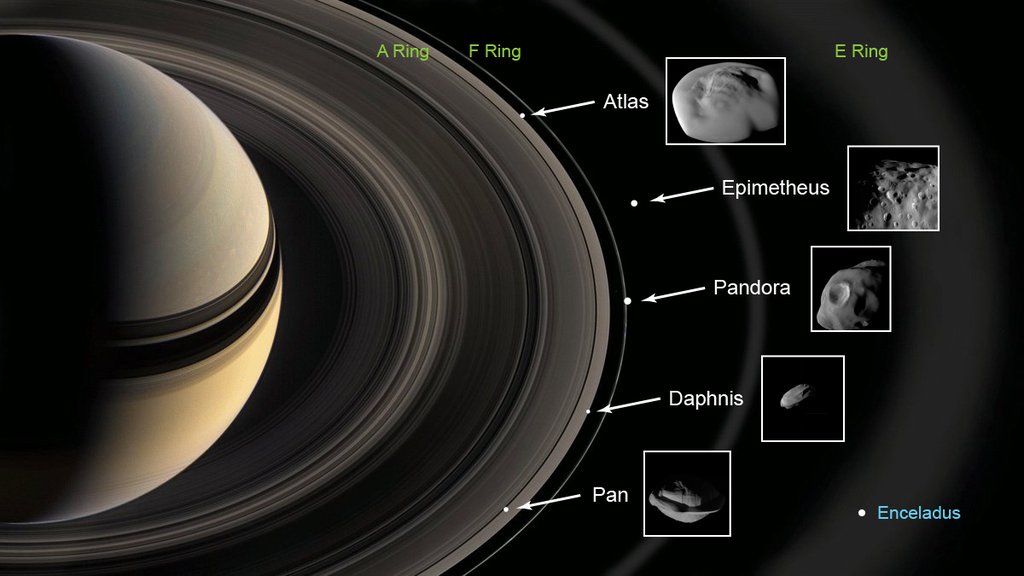 This graphic shows the ring moons inspected by NASA's Cassini spacecraft in super-close flybys. The rings and moons depicted are not to scale.› Full image and caption
Credit: NASA-JPL/Caltech 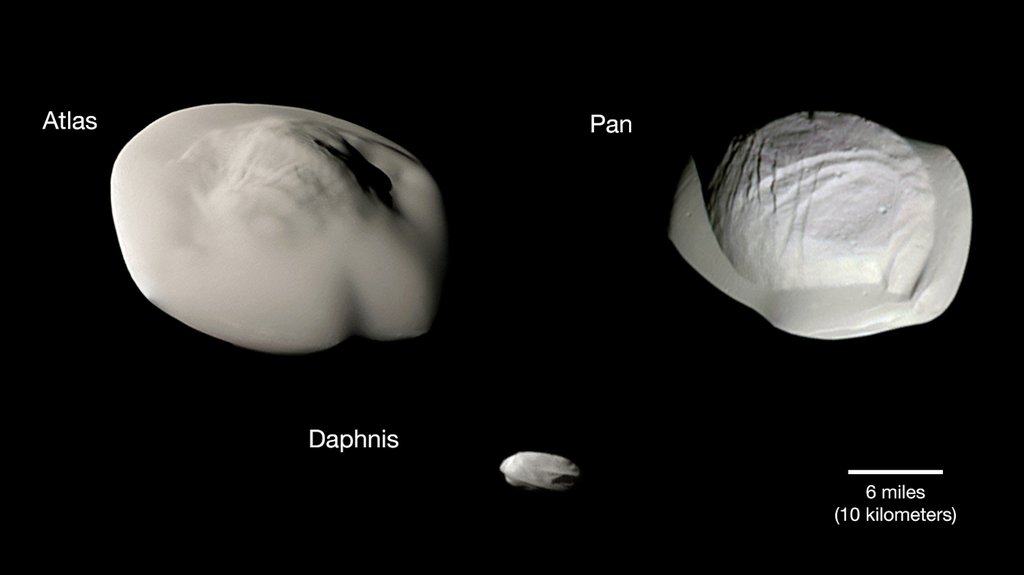 NASA's Cassini spacecraft gave scientists the closest-ever look at the mini-moons near Saturn - and new data that helps explain their weird shape and what they're made of.

New findings have emerged about five tiny moons nestled in and near Saturn's rings. The closest-ever flybys by NASA's Cassini spacecraft reveal that the surfaces of these unusual moons are covered with material from the planet's rings - and from icy particles blasting out of Saturn's larger moon Enceladus. The work paints a picture of the competing processes shaping these mini-moons.

"The daring, close flybys of these odd little moons let us peer into how they interact with Saturn's rings," said Bonnie Buratti of NASA's Jet Propulsion Laboratory in Pasadena, California. Buratti led a team of 35 co-authors that published their work in the journal Science on March 28. "We're seeing more evidence of how extremely active and dynamic the Saturn ring and moon system is."

The new research, from data gathered by six of Cassini's instruments before its mission ended in 2017, is a clear confirmation that dust and ice from the rings accretes onto the moons embedded within and near the rings.

Scientists also found the moon surfaces to be highly porous, further confirming that they were formed in multiple stages as ring material settled onto denser cores that might be remnants of a larger object that broke apart. The porosity also helps explain their shape: Rather than being spherical, they are blobby and ravioli-like, with material stuck around their equators.

"We found these moons are scooping up particles of ice and dust from the rings to form the little skirts around their equators," Buratti said. "A denser body would be more ball-shaped because gravity would pull the material in."

"Perhaps this process is going on throughout the rings, and the largest ring particles are also accreting ring material around them. Detailed views of these tiny ring moons may tell us more about the behavior of the ring particles themselves," said Cassini Project Scientist Linda Spilker, also at JPL.

Of the satellites studied, the surfaces of those closest to Saturn - Daphnis and Pan - are the most altered by ring materials. The surfaces of the moons Atlas, Prometheus and Pandora, farther out from Saturn, have ring material as well - but they're also coated with the bright icy particles and water vapor from the plume spraying out of Enceladus. (A broad outer ring of Saturn, known as the E ring, is formed by the icy material that fans out from Enceladus' plume.)

The key puzzle piece was a data set from Cassini's Visible and Infrared Mapping Spectrometer (VIMS), which collected light visible to the human eye and also infrared light of longer wavelengths. It was the first time Cassini was close enough to create a spectral map of the surface of the innermost moon Pan. By analyzing the spectra, VIMS was able to learn about the composition of materials on all five moons.

VIMS saw that the ring moons closest to Saturn appear the reddest, similar to the color of the main rings. Scientists don't yet know the exact composition of the material that appears red, but they believe it's likely a mix of organics and iron.

The moons just outside the main rings, on the other hand, appear more blue, similar to the light from Enceladus' icy plumes.

The six uber-close flybys of the ring moons, performed between December 2016 and April 2017, engaged all of Cassini's optical remote sensing instruments that study the electromagnetic spectrum. They worked alongside the instruments that examined the dust, plasma and magnetic fields and how those elements interact with the moons.

Questions remain, including what triggered the moons to form. Scientists will use the new data to model scenarios and could apply the insights to small moons around other planets and possibly even to asteroids.

"Do any of the moons of the ice giant planets Uranus and Neptune interact with their thinner rings to form features similar to those on Saturn's ring moons?" Buratti asked. "These are questions to be answered by future missions."

Cassini's mission ended in September 2017, when it was low on fuel. Mission controllers deliberately plunged Cassini into Saturn's atmosphere rather than risk crashing the spacecraft into the planet's moons. More science from the last orbits, known as the Grand Finale, will be published in the coming months.