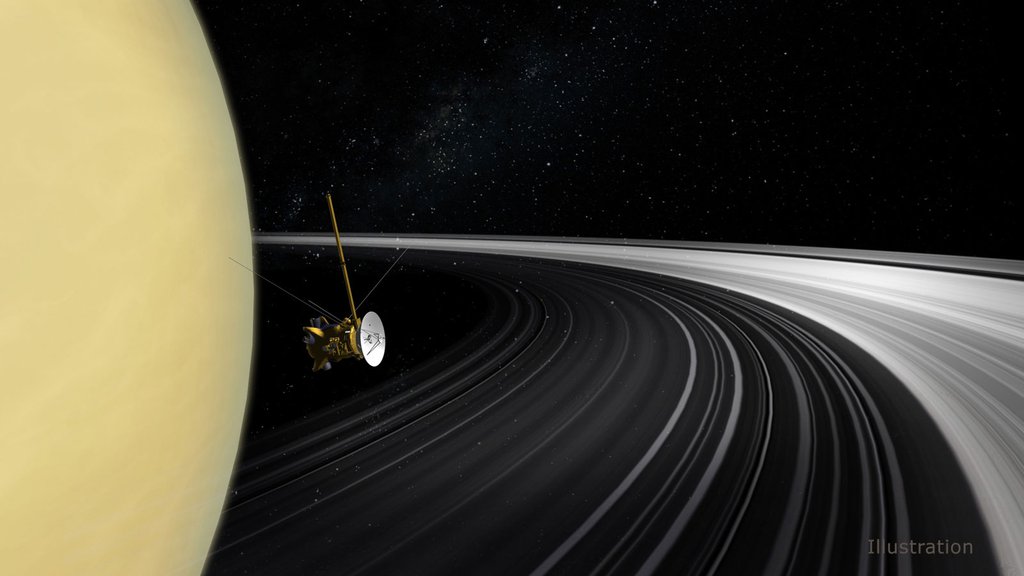 An artist's concept of the Cassini orbiter crossing Saturn's ring plane. New measurements of the rings' mass give scientists the best answer yet to the question of their age.› Larger view
Credit: NASA/JPL-Caltech

New measurements of the mass of Saturn's rings reveal their age - and something they have in common with dinosaurs.

The rings of Saturn may be iconic, but there was a time when the majestic gas giant existed without its distinctive halo. In fact, the rings may have formed much later than the planet itself, according to a new analysis of gravity science data from NASA's Cassini spacecraft.

The findings indicate that Saturn's rings formed between 10 million and 100 million years ago. From our planet's perspective, that means Saturn's rings may have formed during the age of dinosaurs.

The conclusions of the research - gleaned from measurements collected during the final, ultra-close orbits Cassini performed in 2017 as the spacecraft neared the end of its mission - are the best answer yet to a longstanding question in solar system science. The findings were published online Jan. 17 in Science.

Saturn formed 4.5 billion years ago, in the early years of our solar system. There have been clues that its ring system is a young upstart that attached to Saturn years afterward. But how long afterward?

To figure out the age of the rings, scientists needed to measure something else: the mass of the rings, or how much material they hold. Researchers had the remote-sensing measurements from Cassini and both of NASA's Voyager spacecraft in the early 1980s. Then came Cassini's unprecedented, up-close data from its final orbits. As the spacecraft was running out of fuel, it performed 22 dives between the planet and the rings.

The dives allowed the spacecraft to act as a probe, falling into Saturn's gravity field, where it could feel the tug of the planet and the rings. Radio signals sent to Cassini from the antennas of NASA's Deep Space Network and the European Space Agency relayed the spacecraft's velocity and acceleration.

Once scientists knew how much gravity was pulling on Cassini, causing it to accelerate - down to a fraction of a millimeter per second - they could determine how massive the planet is and how massive the rings are.

"Only by getting so close to Saturn in Cassini's final orbits were we able to gather the measurements to make the new discoveries," said Cassini radio science team member and lead author Luciano Iess, of Sapienza University of Rome. "And with this work, Cassini fulfills a fundamental goal of its mission: not only to determine the mass of the rings, but to use the information to refine models and determine the age of the rings."

Iess' paper builds on a connection scientists previously made between the mass of the rings and their age. Lower mass points to a younger age, because the rings, which are bright and mostly made of ice, would have been contaminated and darkened by interplanetary debris over a longer period. With a better calculation of ring mass, scientists were better able to estimate the rings' age.

Saturn scientists will continue work to figure out how the rings formed. The new evidence of young rings lends credence to theories that they formed from a comet that wandered too close and was torn apart by Saturn's gravity - or by an event that broke up an earlier generation of icy moons.

It's long been known that Saturn's equatorial atmosphere rotates around the planet faster than its inner layers and core. Imagine a set of nested cylinders, rotating at different speeds. Eventually, toward the center of the planet, the layers move in synchrony and rotate together.

Jupiter's atmosphere behaves like this, too. But the new findings show that Saturn's layers start rotating in synchrony much deeper into the planet - at least 5,600 miles (9,000 kilometers) in. That's three times deeper than the same phenomenon at Jupiter. It's a depth that equals 15 percent of Saturn's entire radius.

"The discovery of deeply rotating layers is a surprising revelation about the internal structure of the planet," said Cassini Project Scientist Linda Spilker of JPL. "The questions are what causes the more rapidly rotating part of the atmosphere to go so deep, and what does that tell us about Saturn's interior?"

At the same time, the measurement of Saturn's gravity solved yet another unknown: the mass of the core. Models of the interior developed by Burkhard Militzer, a UC Berkeley professor and a co-author of the paper, indicate that it is 15 to 18 Earth masses.

Cassini's mission ended in September 2017, when it was low on fuel and deliberately plunged into Saturn's atmosphere to protect the planet's moons. More science from the last orbits, known as the Grand Finale, will be published in the coming months.