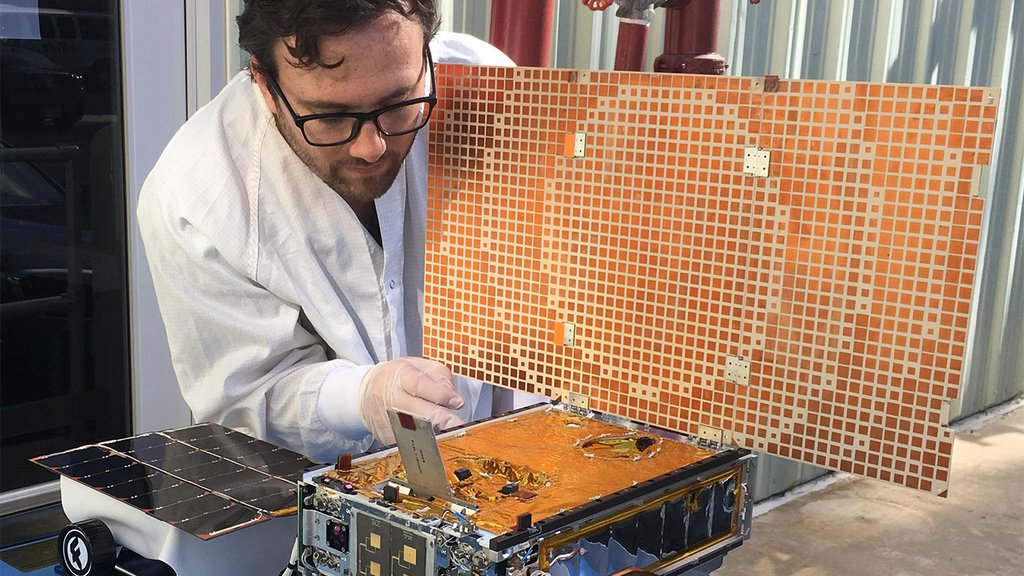 Engineer Joel Steinkraus uses sunlight to test the solar arrays on one of the Mars Cube One (MarCO) spacecraft. As the first CubeSat to enter deep space, MarCO earned a 2020 Laureate from Aviation Week & Space Technology.› Full image and caption
Credit: NASA/JPL-Caltech

The twin spacecraft, the first of their kind to fly into deep space, earn a Laureate from Aviation Week & Space Technology.

Aviation Week & Space Technology is bestowing a prestigious Laureate award on NASA's pair of briefcase-size Mars Cube One spacecraft. Known as MarCO, they're the first CubeSats - compact spacecraft made up of cube-shaped units - to travel into deep space.

Designed and built at NASA's Jet Propulsion Laboratory in Pasadena, California, as a technology demonstration, MarCO launched to the Red Planet last year with NASA's InSight lander. Using experimental radios and antennas, the pair relayed signals back to Earth that enabled InSight's team to observe the spacecraft's Nov. 26, 2018, entry, descent and landing on Mars in near real-time.

They also sent back stunning images of Mars and performed some simple radio science, transmitting signals through the edge of Mars' atmosphere - all within a low-cost mission.

"It's gratifying to see MarCO honored in this way. The accomplishments of the pair highlight the tremendous potential of small spacecraft to enhance our exploration efforts," said JPL Director Michael Watkins.

Now in their 63rd year, the Laureates honor achievements in global aerospace. A Grand Laureate in each of four categories will be selected from the 28 winners at the awards ceremony being held in March in Washington. This isn't the only honor for MarCO: It was named Small Satellite Mission of the Year in August by the American Institute of Aeronautics and Astronautics.

"This is the MarCO team's second major aerospace award," said John Baker, JPL's program manager for small spacecraft. "It's an honor to be recognized in our field. But the real pleasure has been seeing how the team's achievements are inspiring future space projects around the world."